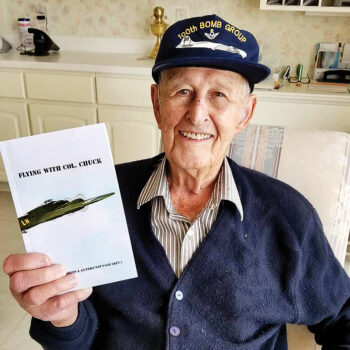 Colonel Charles J. “Chuck” Gutekunst USAF (retired) passed away Saturday, March 13, 2021, at the age of 102. Chuck entered the United States Army Air Corps as an aviation cadet, graduating as a pilot from flight training as a 2nd Lieutenant. During his time in what became the United States Air Force, Chuck flew B-17s as a co-pilot for the 100th Bomb Group during World War II. He also flew other aircraft, had a cameo in the movie, The Way to the Stars, and spent time with the Royal Air Force in England. Chuck was stationed at many different bases throughout the United States and abroad. Chuck served for almost 31 years. After retiring to Vero Beach, Florida for 20 years, Chuck moved with his wife, Polly, to SaddleBrooke in 1992. He made many friends as he continued to fly his airplane into his 90s, spent time at the LaCholla Air Park in Oro Valley, flew drones, and taught himself to play the organ. Never one to stay idle, Chuck became a published author the month before his 100th birthday in 2019. His collection of memoirs titled, Flying with Col. Chuck, is available from Amazon. At the time of his death, Chuck was the oldest resident of SaddleBrooke. Chuck was preceded in death by his wife, Palma “Polly” Gutekunst, his son Douglas Gutekunst, his parents, Leonard and Viola Gutekunst, his siblings, Leonard Gutekunst (Jane), Viola Gutekunst, Mary Lou Schneider, and his devoted friend and companion, Christine Sowards of Tucson, Ariz. He is survived by his son, David Gutekunst, the son of his heart, Whitney Morgan (Heather), the grandson of his heart, Connor Morgan, his brother-in-law Fred Schneider, his niece Betsy Krausa (Rich), his nephew Curt Schneider (Carla), and his great-nephews Doug Krausa, Steve Schneider, and Mike Schneider. Chuck will be interred at Arlington National Cemetery. 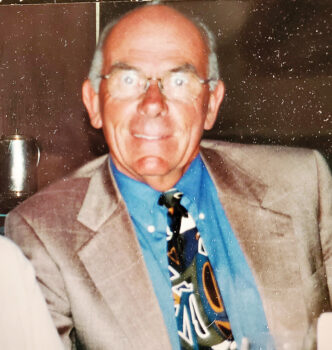 Ralph “Ross” Rogers passed March 18, 2021, in Tucson, Ariz. He was born December 10, 1935, in Oakland, Calif., the son of Mildred Ethel Betten and Ralph Beach Rogers. Ross was a businessman and an entrepreneur from an early age. At the age of 9, he founded his own neighborhood paper and sold fruits and vegetables to his neighbors. He acquired his first paying job after placing an ad in the local newspaper, “15 year old boy looking for summer job working in store.”

In 1953, Ross graduated from Sir Francis Drake High School in San Anselmo, Calif. He attended The College of The Pacific, where he received his degree. Upon graduation, he accepted a position with The Emporium in San Francisco. It was here he met his wife of 63 years Marjorie Little. Ross would spend the rest of his career in the furniture business. Whether as a furniture buyer, independent sales rep, or furniture store owner. The freedom of this position enabled him to travel the world with his family well into his retirement years.

The Rogers would have many homes throughout the west, all meticulously gardened. A most favorite was SaddleBrooke, Ariz. He and Marjorie thrived in this vibrant community of new friends, parties, traveling, golf, bocce ball, and early morning breakfast walks.

Ross is survived by his wife Marjorie; four children: Steven, Gary, Mark, and Nancy; four beautiful grandchildren: Keira, Karsen, Madeline, and Audrey; and the newest addition is his great-grandson Andrew. No grieving him more than his beloved dog, “Jack Arthur the All-American Boy, born on the 4th of July.”

Ross will be remembered as a man who had the loudest laugh in the room, a wry sense of humor, wit, and the biggest ears that he gifted to all of his children and grandchildren. It was truly a great 85 years well lived.