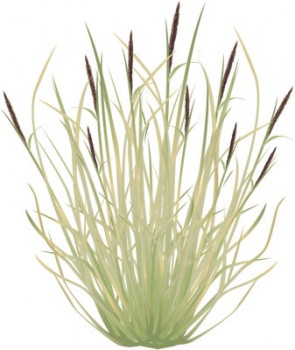 What could be so bad about a grass that was imported from Africa to provide erosion control and feed for cattle? A lot. On April 30 Dodge DiVall from Arizona State Parks talked to the SaddleBrooke Sunrise Rotary Club about the threat of buffelgrass in Arizona. Arizona is the first state to declare the plant as a noxious weed and Park rangers and volunteers are doing their best to eradicate, if not control, buffelgrass.

Introduced to the U.S. in the 1930s, buffelgrass (Pennisetum ciliare), is a perennial bunch grass introduced from the African savannah. Buffelgrass grows in dense stands, producing large quantities of seed that readily germinate and are able to make a home in both disturbed and undisturbed desert sites. It is spreading rapidly across Arizona’s deserts, threatening the Sonoran desert ecosystems and public as well as private lands.

Rotarians also learned that as the Sonoran Desert changes into non-native grasslands, bio-diversity will be significantly affected, including not just threatened, endangered and at-risk plant and animal species, but also iconic species including the saguaro cactus. Another risk is that buffelgrass burns hotter than other grasses, increasing fire danger in southern Arizona.

Members of the club volunteered to help pull buffelgrass in Catalina State Parks. Got a shovel?