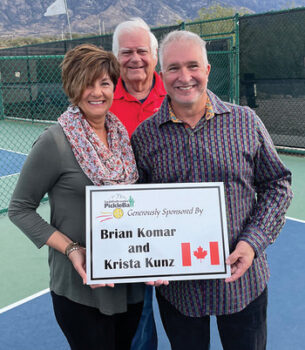 Brian and Krista are “snowbirds” from British Columbia, residing in SaddleBrooke from November to April. They chose Arizona because the weather allows them to be outdoors all winter long. According to Brian and Krista, they first played pickleball at an introductory lesson sponsored by SPA in 2014. They immediately enjoyed the sport because it was easy to learn and had simple rules. As they played more and more, they realized that pickleball was great exercise for both the body and the mind. Krista explained that playing pickleball requires hand-eye coordination, tests reflexes, and challenges agility and balance, which are all beneficial as we age.

They also found that pickleball was one of the best social activities available in SaddleBrooke. Krista and Brian said that they have met and enjoyed playing with people of all ages and skill sets. They added that since pickleball is the fastest growing sport and played worldwide, they certainly want to be part of it.

Krista and Brian explained that they believe pickleball has given so much to them that they wanted to give back to SPA by sponsoring a court to expand the number of courts available for play in SaddleBrooke.