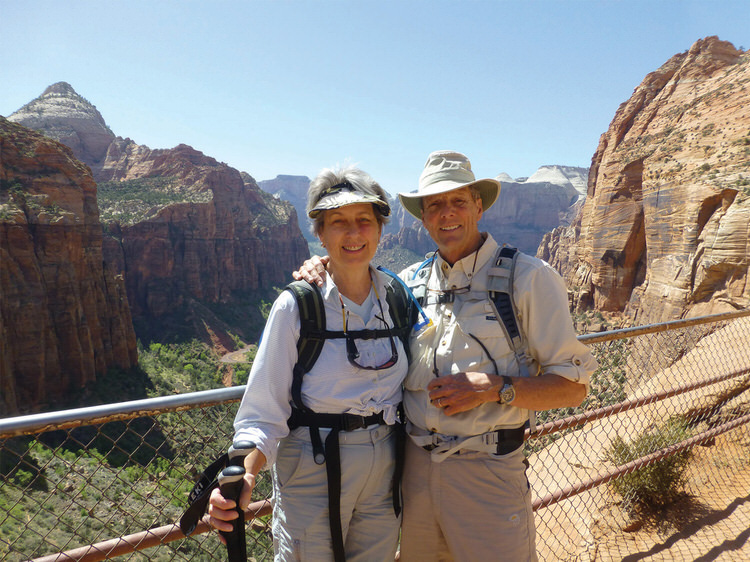 Walt Shields moved to Tucson when he was six years old and describes it as a “fantastic” place to grow up. As a Boy Scout and All-American high school swimmer, he spent countless hours exploring the desert. Walt’s fond memories of growing up in the Old Pueblo were the catalyst behind the Historic Downtown Tucson walks many have enjoyed.

Seeking a warmer climate more suitable for year-round golfing and hiking upon retirement, Walt and wife Tiggy moved back to Tucson, settling in SaddleBrooke in 2005. He soon joined the SaddleBrooke Hiking Club (SBHC) and began guiding the following year, serving as chief hiking guide from 2012 to 2014.

Recognizing the SBHC was comprised of an “older age group in a hostile environment,” Walt knew more training was needed for both hikers and guides. So in 2012, he set about creating a first-aid training and wilderness medicine course. Walt also developed training on the correct use of hiking poles in 2017, and in 2019 he was instrumental in implementing the yellow nametags now worn by all hikers, complete with emergency contact and medical information.

Seeing that none existed, in 2018 Walt recommended to the board that a committee be created specifically for the purpose of establishing consistent guidelines, procedures, and training for all guides, then served on the committee that drafted the guidelines in place today. Walt has authored numerous articles about the SBHC, its members and leadership, and the technical aspects of hiking. Walt’s greatest joy as a hiking guide has been to introduce others safely to the beautiful Sonoran Desert he loves.

Walt has a passion for travel and foreign cultures and has seen much of the world, including East Africa, China, Turkey, Patagonia, New Zealand, and Europe. Highlights include an underwater archeology project in Israel, a 10-day perimeter trip of Mont Blanc, eight hike/bike trips with friends in Europe, a rim-to-rim-to-rim backpacking trip in the Grand Canyon, and a four-day unsupported hut-to-hut hiking experience on the Milford Trek in New Zealand where the magnificent waterfalls more than made up for the constant rain.

The SaddleBrooke Hiking Club is the wonderful organization it is today, in no small part, due to Walt’s efforts and advocacy on behalf of all its members. Having had the privilege of hiking with Walt on several occasions and having seen him in action twice when a fellow hiker needed medical assistance, I know what a great asset he is to our club. Many of you have had the same experience, and I know many more will have the privilege to do so in the future.