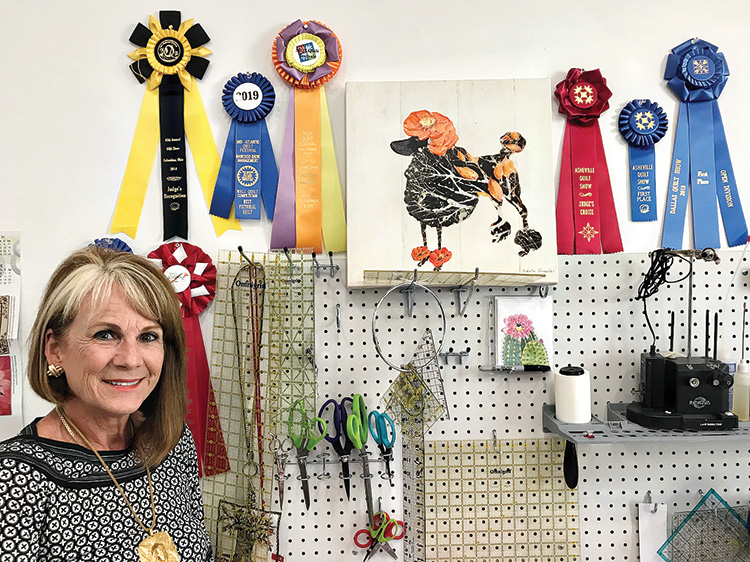 Tami with some of her many ribbons.

Friday Quilt Club member, Tami Graeber originally hails from California. Her father was the local Sheriff/Coroner. A tomboy who really liked competing, Tami enjoyed barrel racing and 4-H, was a sprinter on her high school track team, and competed in water ski racing, tennis, and softball! She wanted to be a physical education teacher, but graduated when teaching jobs were scarce, so she turned to nursing and became a hospice registered nurse. Athletics have been, and are still, a significant part of her life. Tami was a member of the SaddleBrooke softball team and recently competed in the Senior Olympics winning a gold medal in track.

Tami’s mother was a competitive hand-quilter. Tami tried hand-quilting, but found it too slow for her. When machine quilting became acceptable in competitions, she decided to compete. Tami began quilting in 2005 and has won numerous national awards in the last 15 years. Initially, she did traditional quilting with all of its rules, but found that she preferred the freedom to express herself that art-quilting provided. With no formal art background, Tami is talented by nature and self-taught. She occasionally does a traditional quilt and has a red and white in competition around the country now called Jester’s Jubilee.

Initially, Tami would do 12-15 quilts a year, but now it takes her 6-12 months to do one show quilt. She hand-paints her quilts, and five years ago her quilt “Talavera Tile” was featured on the cover of the national magazine Quilters’ Quarterly. Her hand-painted quilt blocks are a tribute to the Southwest/Mexican influence she has experienced in Tucson. Her quilt “Moroccon Moonfire” received multiple awards throughout the country, including “Best of Show” in Tucson in 2015. Her quilt 50 Shades of Grey won the 2016 Tucson Quilt Show “Best of Show” award. She took “Best in Show” at the Tucson show three years in a row, which is quite a feat! Another one of Tami’s beautiful quilts, Viva Mexico, won at the Northwest Quilting Expo and ribboned at the Road to California show in 2020. Her traditional quilt, “Patience,” was “Best in Show” in Alaska. In 2019, she created a stunning quilt of her great-great grandmother that won “Best Pictorial” quilt in the New Hampshire show. Tami also had three of her award-winning quilts (Viva Mexico, Folk Art Fun in Baltimore, and Hunters Bounty) in the recent SaddleBrooke Quilt Show.

Tami is a shining example of the active life we all want to live in retirement—one filled with family and friends, creativity, and meaningful activity. She and her husband Fred split their time in Oregon between Klamath Falls and Bend and winter with us in SaddleBrooke. Tami and Fred just built a new house in the Preserve and are enjoying a spectacular view of the golf course, a lake, and the mountains. Fred likes to duck hunt, so each time Tami gets a new sewing machine, Fred gets a new shotgun! Sounds like a great arrangement, doesn’t it?