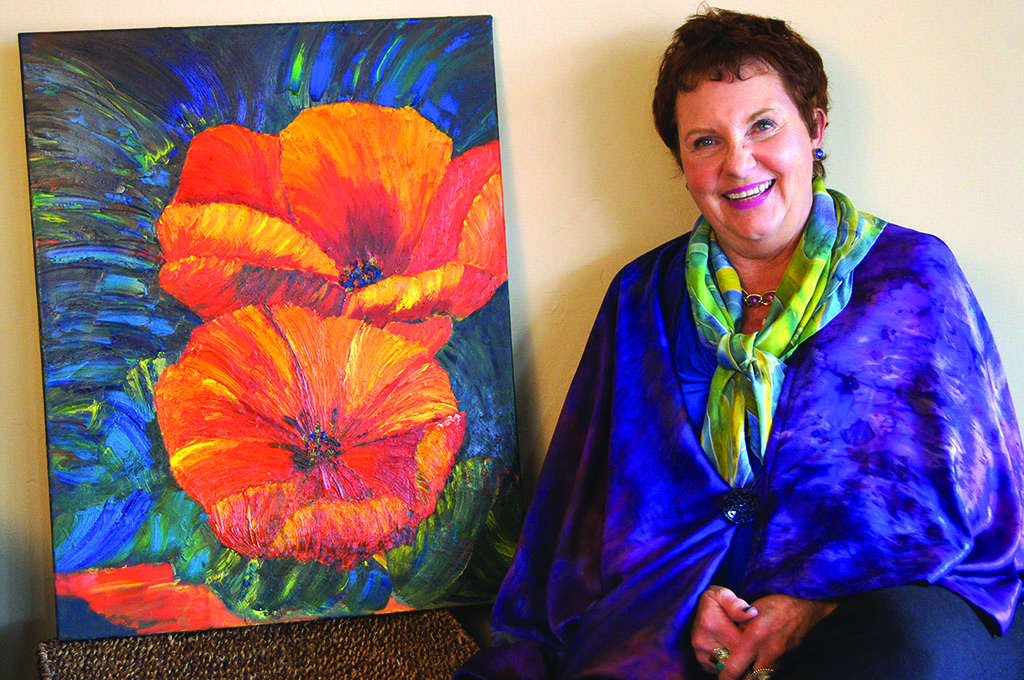 Often talent runs in families. For Kathy Borchert this belief holds true within her close-knit family of gifted artists. With an aunt who is a recognized painter and an adored cousin who teaches junior college art and is a master watercolorist, Kathy’s creativity was encouraged from an early age.

Born in Humboldt, Tennessee, to Earl and Rose Johnson, Kathy was eldest to sister Julia and brother “Weegie.” Earl’s job required several family relocations. Eventually they settled west of Dallas, Texas, in the rural community of Burleson. Along with Burleson’s dirt roads and zero stoplights, Kathy remembers being quite the tomboy. She also remembers that while her home was small and basic, it was nestled within a large pasture that filled her childhood with countless experiences. Sweet, too, are memories of afternoons when she would leave grade school and find her beloved dappled-grey pony tied outside where her father had left him so she could ride home. And there are recollections of her first artistic experiences at the age of ten.

It was then Kathy began to sketch and found treasured mentors in her two favorite artists, Aunt Landa and cousin Ron. They, along with her high school art teacher, encouraged her to improve her talents and to try different mediums on her own. In fact, it was Ron who introduced her to pastels while he was a college art student and she was focusing on becoming a nurse.

Then, while finishing nurse’s training at a Fort Worth, Texas, hospital and sharing an apartment with a girlfriend, Kathy met Fred. A pilot at Carswell Fort Worth Air Force Base, Fred, who lived in an adjacent building, was lounging poolside with friends. Kathy’s apartment overlooked his pool and he caught her eye. Daringly she called out to him from her balcony. Then on pretense, she took garbage outside where they just happened to meet. They went to dinner that night and six months later they were married. That was forty-eight years ago. Their family grew to include son Fred, daughter Deena and six grandchildren. Most years they lived in the Chicago area, where they still reside in the summer. Similarly, they make their home in SaddleBrooke in the winter.

Throughout the years, Kathy developed her artistic abilities becoming accomplished in the areas of calligraphy, life drawing, oil, watercolor and pastel painting, photography, jewelry and textiles. She loves how pastels and watercolors blend, photography connects and dyed and painted silks transform into fashion. Over time she has received accolades for her creations from the Columbia Art School’s juried photography shows, exhibits in St. Charles, Illinois, and the SaddleBrooke Fine Arts Guild’s art shows, fellow Guild members and admiring patrons.

Kathy believes art comes from deep within the soul. She strives to please herself first; yet is thrilled when her work touches others. Rich with life and beauty, Kathy Borchert’s creations brilliantly transcend beyond those early drawings when a ten-year-old girl lived in a little house in the middle of a Texas pasture.