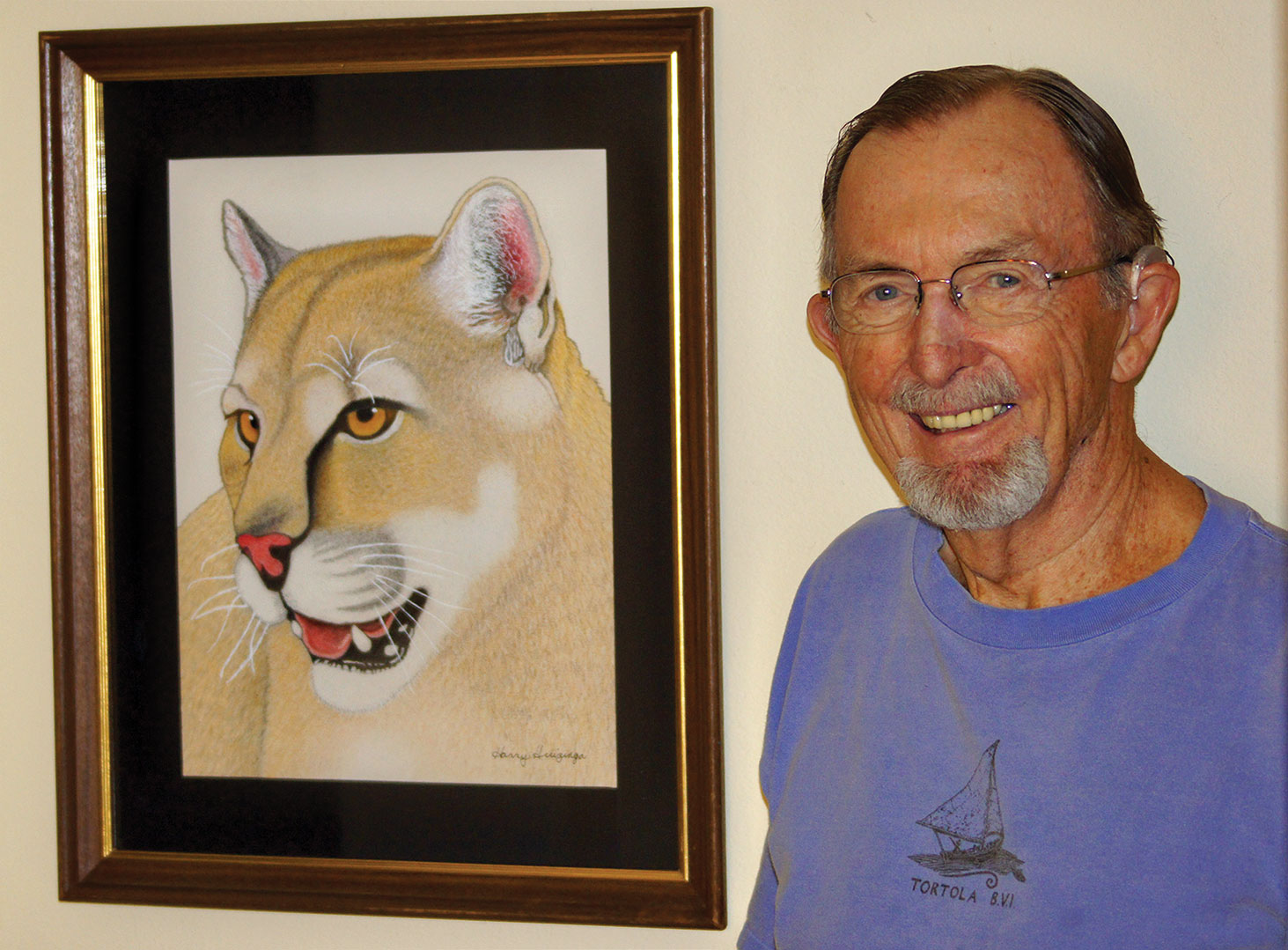 To see like an artist is a powerful talent. Artists look with the same camera-type eyes as the rest of us but often process images differently. Artists see leaves and also patterns, lights, shadows, spaces and more. Harry Huizinga has spent years learning to see like an artist and interpreting what he sees into astonishing wildlife imageries and whimsical political commentaries.

Born and raised in Linden, New Jersey, Harry was the only child to mother Evelyn and father Harry. Smiling, he says his artistic education came about in perhaps a somewhat different way than other artists. To begin, a self-described scientist with a dominant analytical left-brain, Harry has always loved detail, order and animals. As a child he spent hours in nature studying wildlife. Eventually, his love of animals led to a Bachelor of Science degree in Biology from Michigan State.

After college Harry was drafted into the Army during the 1956 Lebanon Conflict. Fortunately he was assigned to Fort Detrick, Maryland, as a wildlife infectious disease research technician instead of the Middle East. His experience prompted him to earn a Masters at University of Maryland, a PHD at University of Connecticut and a Post Doctorate at University of North Carolina. Ultimately Harry became a Professor at Illinois State University where he taught zoology and researched wildlife diseases.

Life for Harry was not all academia. While stationed at Fort Detrick, Harry visited premier art museums such as The National Gallery of Art in Washington DC and became inspired by masters such as Winslow Homer. Furthermore, while attending the University of Connecticut, he met lovely nursing student and future wife Linda. Over the years, Harry, Linda, son Kurt and daughter Kirsten traveled the U.S. and the world enjoying great works of art. Then, approximately nineteen years ago, Harry retired and he and Linda moved to SaddleBrooke.

Harry could now develop his brain’s creative right side. He took a basic drawing class from SaddleBrooke Fine Arts Guild instructor Laurie Brussel. Grinning he recalls he was late for class and the other students were engrossed in their work. He sat down and asked Laurie how to get started. She placed her purse in front of him and said draw that. Tentatively he began and found his results so encouraging he was hooked. He took a variety of other Guild classes, but found his passion was pencils. He created hundreds of graphite or color pencils drawings of sailboats, animals and political portrait cartoons. Surprisingly, Harry found color pencils allowed the control, detail, blending and layering opacity that he sought.

Today Harry focuses primarily on the art of animals where he can combine his left-brain love of detail with his right-brain drawing creativity. An active Guild member, Harry is an invaluable lighting expert for Guild Art Shows. A member of the Tucson Colored Pencil Society, his works grace art shows, libraries, government buildings and churches. Through his drawings Harry Huizinga conveys beautiful stories and animal personalities, and all through the eyes of an artist.