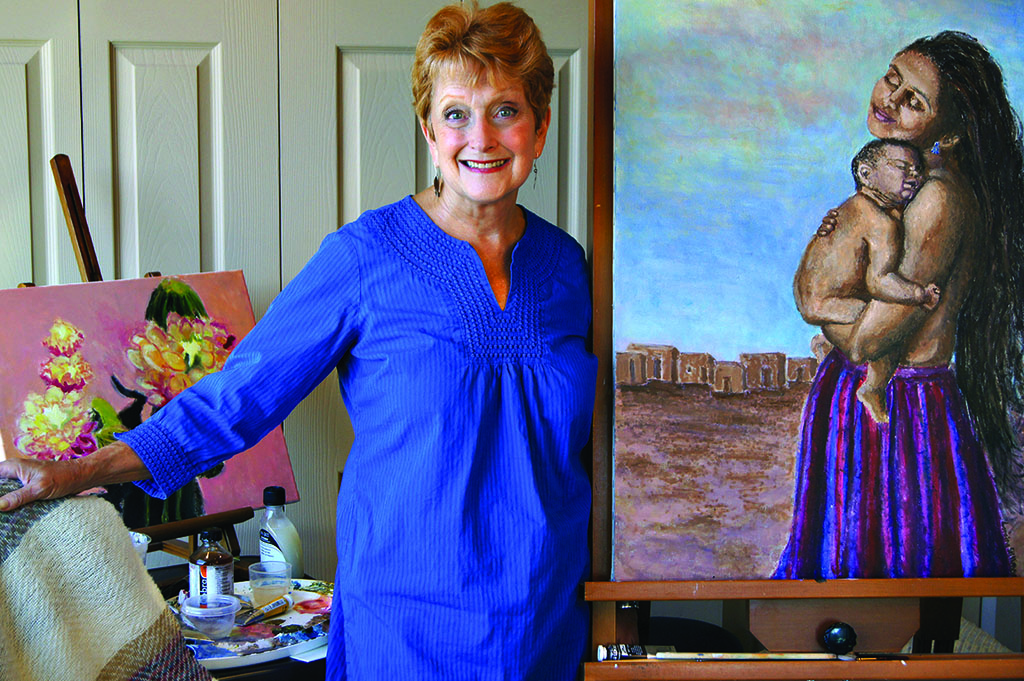 The eldest child of Willard and Ann Polski, Loraine was born in Minneapolis, Minnesota, and raised in the St. Louis Park area. She remembers during harsh winters skating on their backyard manmade ice rink with brother Steve and sister Bonnie. Smiling, she confides she had much preferred indoor activities. Her father, owner of three BBQ restaurants, was frequently busy. Her mother, a talented seamstress, taught her young daughter to sew, knit and crochet. Loraine’s love for drawing emerged at an early age as well. Soon her artistic talents surpassed fellow students, prompting her mother and high school art teacher to encourage her to pursue an art career.

At the University of Minneapolis, Loraine became passionate for traditional studio and non-traditional art forms, motivating her to pursue an Art Education degree. There too, during her freshman year, Loraine met future husband Larry at a sorority/fraternity exchange.

After their marriage in 1964, Loraine taught school. Larry’s writing and advertising career meant several relocations from Minnesota to Illinois, Missouri and Japan. Loraine recalls their adventurous year living in Tokyo with their infant daughter, Jamie, navigating the country, learning Japanese customs and visiting art galleries. To this day, she attributes the Asian influence in her artwork to this period in her life.

Likewise, after the family moved back to Lake Forest, Illinois Loraine, now mother to Jamie and son John, found life no less hectic; however, she was determined to make art a priority. As a teacher, Loraine taught adult and after school art classes. As a student, she became proficient in weaving, painting and printmaking, showing and selling her artwork at various juried shows and winning several awards. She joined the Deer Path Art League board of directors and the Weavers Guild of the North Shore. Inspired by the garments of well-known weaver Anita Mayer, Loraine joined a women’s artists group whose creations appear in several books featuring Women’s Journey in Fiber. Additionally as an expert printmaker, her works appear in the publication Women in Print and among the College of Lake County’s permanent collection.

Approximately a year ago, Loraine and Larry moved to SaddleBrooke. As active grandparents to four grandchildren, life remains eventful. And, since joining the SaddleBrooke Fine Arts Guild, she has become a highly respected member. Presently Loraine is teaching a four-week printmaking class geared to students of all levels. The class dates are November 13 and 20, December 3 and 11, 2015, from 1:00 to 4:00 p.m.

Loraine Stillman is a truly remarkable, multi-faceted artist whose talents are to be prized and whose mentoring treasured.

For information about joining Loraine Stillman’s class go to: http://www.saddlebrookefinearts.org/Pages/Main%20Pages/classes.html.