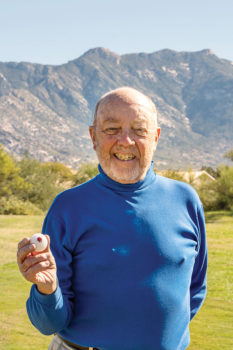 Art in his glory.

Almost ten years ago to the day Art Walsh recorded his first ever hole-in-one on the fourth hole at The Preserve Golf Course. He remembers it clearly: November 22, 2008 zinc tees, exactly 170 yards and he used a four wood. Amazing the difference ten years can make! On Wednesday, November 14, 2018, Art was playing in the first round of this year’s Club Championship, also at The Preserve. His victim this time was the 14th hole and I think he was playing the green tees. He said the yardage was about 145 yards to a red pin and that he hit his seven wood very well! We all know that the how and the how far and the club used are nothing but noise. All that matters is the result. Once again, his ball landed directly in front of the pin, bounced a few times and fell to the bottom of the cup. His playing partners John Borchert, Jerry Emmons and Ted Duma assisted in the yelling and screaming. They were actually the first to inform Art that it was “going in” and by doing so caused Art to raise up and see his ball disappear. Great story! A better story is that he feels his third will be in November 2028.

Did I forget to tell you that Art Walsh is 85 years old and is still playing golf three times a week? He was in his early thirties before he actually took up the game and his first experiences were at Bethpage State Park on Long Island. He has been an active member of the MPMGA since his arrival in SaddleBrooke in 2002. I am fairly confident that Art and his partners celebrated after they finished their round but even if they did not Art was greatly applauded and cheered for his accomplishment at the luncheon held after the tournament was completed on Thursday. Congratulations one more time.