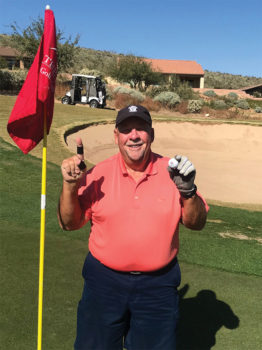 I bet most of you have forgotten about the Hole-in-One Train. No reason to fret for it is running smoothly and thanks to Alan all the seats in the second car are now taken. Management is contemplating the addition of a third car. What do you think?

Does anyone know about a “Monday Sensitivity Golf Group?” Alan said that he was playing in same on Monday, November 19, at the Preserve and that it is one of his normal groups. What am I missing? Anyway, his round was not progressing very well when he reached the 11th hole. He had no idea which of his swing combinations was appropriate for a shot of 155 yards to a red flag. After careful consideration he chose his six iron and his over-the-top lunging swing. He executed the shot brilliantly. The ball traveled the entire distance to the green in the air and after one low bounce, disappeared. Witnesses Gerry Shafer, Henry Mason and Mike Schroer agreed that it did happen so hole-in-one number three is officially in the bank. Alan, have you removed this swing combination from the penalty box? Congratulations one more time!

Alan is by some standards a newcomer to the game. He started playing in 1971 at a nine-hole course in Memphis. He swears that the greens fees were 75 cents and that there was no additional charge for walking. Great story! His first ace was scored in St Louis about twenty years ago and his second was on the eighth hole at MountainView in 2007. His memory of this one is still vivid. It was a Thursday Men’s Club event with a luncheon and the MPMGA had not yet begun its free beer policy for a hole-in-one. Yes, he bought the beer for everyone. Hope your celebration for this hole-in-one was just as enjoyable!