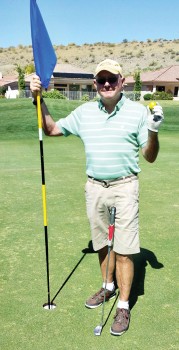 On Thursday, April 9, a hole-in-one was recorded on number seventeen at the MountainView Golf Course by Dennis McCrossen. Dennis is certainly due all the praise and congratulations he received for registering his second career hole-in-one but he may be best remembered by his peers for accomplishing this feat during a Men’s Club event. Because of this, in the near future at a monthly luncheon, free beer will flow in his honor.

Dennis gauged the distance for his shot on seventeen to be about 180 yards. He pulled his trusty 5 utility club from his bag and walked confidently to the tee box. Seconds later history was made. John Cobb, Jim Hardwick and Mal Mudd, his playing partners, stand ready to acknowledge the fact and that is a good thing. Good because his first hole-in-one happened on a Sunday afternoon at MountainView on the fourth hole when he was playing by himself. Really, he said, it did go in! Dennis has played the game for many years but did not play seriously until about twenty years ago when he was living in Michigan. Since moving to SaddleBrooke some 14 years ago he has been a regular at Men’s Club events.

Dennis did share one humorous tidbit about this hole-in-one with us. As you can imagine he was eager to share his good fortune with his wife Lynn so he hurried home after he finished his round. Before he could speak Lynn conveyed to him all the facts about his hole-in-one. It seems a good friend happened to be in her back yard and witnessed the shot. She promptly texted Lynn and gave her the news. So there was no big surprise to share. Who says SaddleBrooke does not have its own news network? Congratulations again.