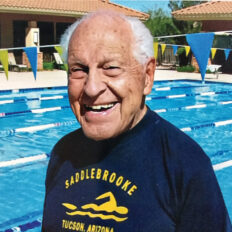 Winning smile of a national champion 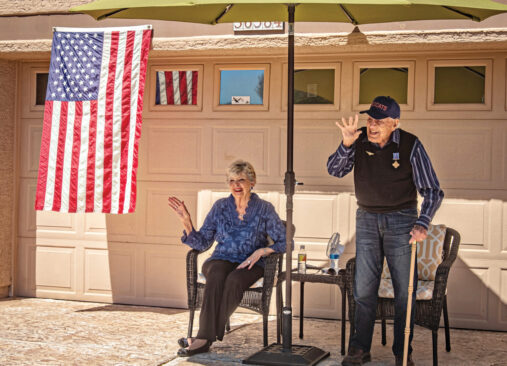 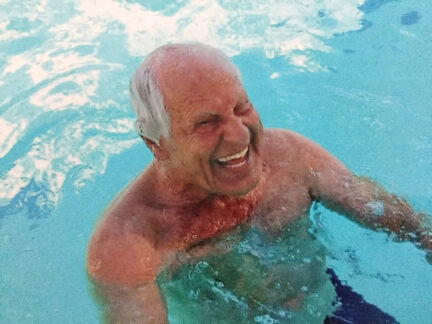 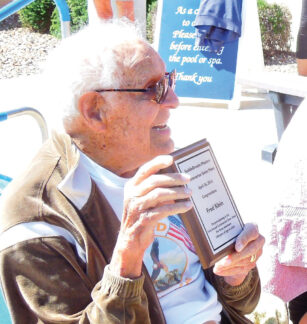 Our beloved friend, Fred Klein, SaddleBrooke’s oldest resident, left us on July 30, 2020. It seems like only yesterday when on April 25, the SaddleBrooke community paraded 220 vehicles by Fred’s home in celebration of his 104th birthday. Fred was thrilled by this wonderful gift. Joined by fiancé Elaine Stamm and swim club coach and close friend, Doug Springer, Fred waved and saluted the enthusiastic throng of well-wishers.

The last two-plus decades of Fred’s life, his SaddleBrooke era, capped a remarkable journey for this accomplished, unassuming gentleman. A graduate of Dartmouth College, Fred left the safety of a carpet manufacturer to support the war effort and enlisted in 1942 in the Marine Corps’ flight program, just two weeks prior to reaching the maximum entry age of 26. Upon earning his wings, Fred reported to pre-deployment training in El Centro, Calif. There in a serendipitous, life-altering, five-week span, in bold violation of the rules banning fraternizing with enlisted personnel, the handsome, dashing, 2nd Lieutenant met, courted and proposed to his future bride Patt, a stunning, red-headed, Marine Corps private. Fred’s imminent departure to the Pacific theater put on hold a wedding that would presage a 70-year marriage.

In 1944, Fred joined the 433rd Marine Medium Bomber Squadron, boasting 54 pilots. He captained the B-25 Mitchell; an aircraft heralded for its tree top-level, combat capability. Fred took pride in often noting that he flew 63 missions, incurring a single bullet hole in his Mitchell’s tail and a cracked windshield. Fred chalked it up to, “just luck.” Absent the 28-year-old Command Pilot Klein, Fred’s crew of six averaged 17 years of age. Fred brought those youngsters home safely 63 times; home to fathers, mothers, sisters, brothers, and future wives. In recognition of his outstanding service, Fred was awarded the Distinguished Flying Cross.

Three days following Fred’s return from his tour of duty in the Pacific, he married his lady Marine. Shortly after reassignment to the east coast, the war ended. Fred continued a successful career, rising to senior level positions in carpet manufacturing before establishing an independent carpet supply firm. At about the age of 80, following retirement in Scottsdale, Fred and Patt discovered SaddleBrooke and made it their home, assuming an active lifestyle of tennis and golf and establishing lasting friendships. Some years later, at over 90 years of age, while at the DesertView Pool, Fred was “recruited” by Karin Bivens to join the SaddleBrooke Swim Club, thereby launching an outstanding, competitive swimming career. As dean of the club, Fred garnered awards including state and national championships and four United States Masters Swimming, All American designations. On the day following the celebration of his 100th birthday, in a unique centenarian swim meet covered by the Tucson press and television media, Fred plied the DesertView pool waters, establishing the all-time national record for the 50-yard backstroke.

Flying coursed through Fred’s being. Following his military service, he earned his commercial license, piloting his twin engine Beechcraft for both business and pleasure. Long after those flying days, shortly before turning 100, Fred punched a huge ticket remaining on his bucket list. Organized by friend Susan Gerhard, during a touring World War II aircraft exhibition hosted by the Scottsdale Municipal Airport, Fred, the former bomber command pilot, took the controls of the P-51 Mustang, a fabled fighter which saw action in the European and Pacific theaters. His one lament was that he was not permitted to execute a takeoff or landing! A short time later, SaddleBrooke friend George Salleberry surprised Fred with a visit to the Mesa Airport where he was not only treated to a flight in a B-25 Mitchell, but he once again piloted the historied bomber.

In 2016, Patt passed away at age 92. Fred and Patt had created a legacy of two sons, Fred and Steve and a grandson. Fred’s grandson Christian is a newly minted medical doctor. Fred was duly proud of his sons and grandson, and especially lauded their professional successes. Following Patt’s death, Fred experienced loneliness created by the loss of his partner of 70 years. Fred’s close friends, including Coach Doug, fellow World War II veteran Paul Gaurnier, Paul Swane, Jack and Jill Fritz, and Phil Simpson looked to fill the void with visits and weekly lunches. And in a stroke of mutual good fortune, Fred and Elaine met, commencing an endearing relationship that flourished over the last several years.

Fred often stated that the last 22-plus years in SaddleBrooke were the happiest and best years of his life, marked by the wonderful friendships that he enjoyed. When asked what could account for his longevity, a life filled with such varied accomplishments, Fred would respond that his parents instilled in him the philosophy of, “Be honest, do a good job, help other people.”

COVID-19 conditions permitting, a memorial will be held at the DesertView pool on what would have been Fred’s 105th birthday, April 25, 2021.