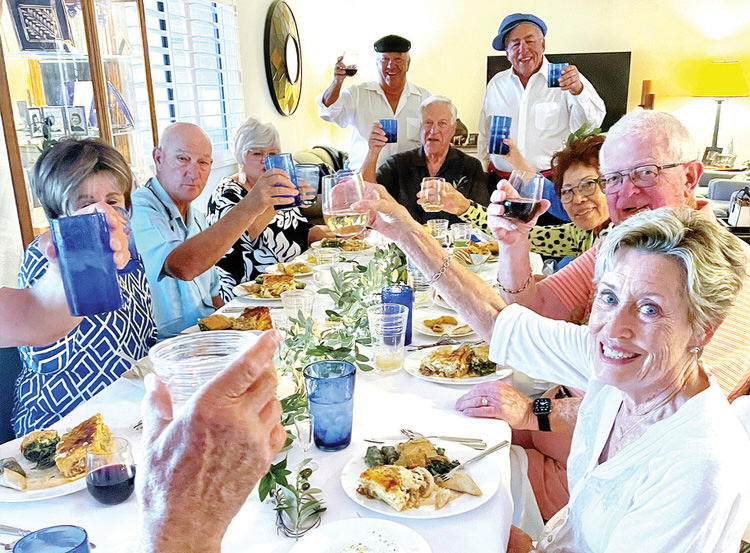 Who doesn’t love Greek food? Especially when it is all homemade and based on authentic recipes that have been handed down through generations of the Pachis and Kartsonis families. We are talking the real thing here! There was a spirited bidding war at the Oracle Schools Foundation Spring Fling to see who would eat at the Kartsonises’ Greek “Traverna.” The hosts, Steve and Nan Kartsonis and Gus and Karen Pachis, apparently have a reputation for hosting a great dinner, which indeed they did.

Guests arrived at the Taverna, which had the Greek flag flying. They were seated at a table decorated with olive branches and candlelight. According to one guest, everything about this dinner was fantastic, especially the first course, which was Saganaki (flaming cheese) accompanied by shots of ouzo. Next, the hosts served a Greek salad with pita bread and tzatziki, a tapas entrée of pastitio, tiropitas, and spanakopita, followed by Greek potatoes and veggies. A delicious baklava was served for dessert. Wine pairings and ouzo shots were served by waiters Gus and Steve. Opa! Who could ask for anything more? Certainly not the guests who raved about the entire meal. And if that wasn’t enough, each couple received a gift box of baklava, chocolate chip cookies, and biscotti—and to-go boxes if they couldn’t finish their dinners.

Events such as these are a significant cornerstone of the Oracle Schools Foundation auction, which raises money to help all children in the district succeed. A huge thank you to the hosts for donating their time and talent for this memorable event. If you would like to host a dinner to auction at the 2023 auction, which will be held on March 11, we would love to accept your donation. Theme dinners are very popular, and you don’t even have to leave the neighborhood! Please contact me at [email protected] if you can contribute in any way to our fundraiser.