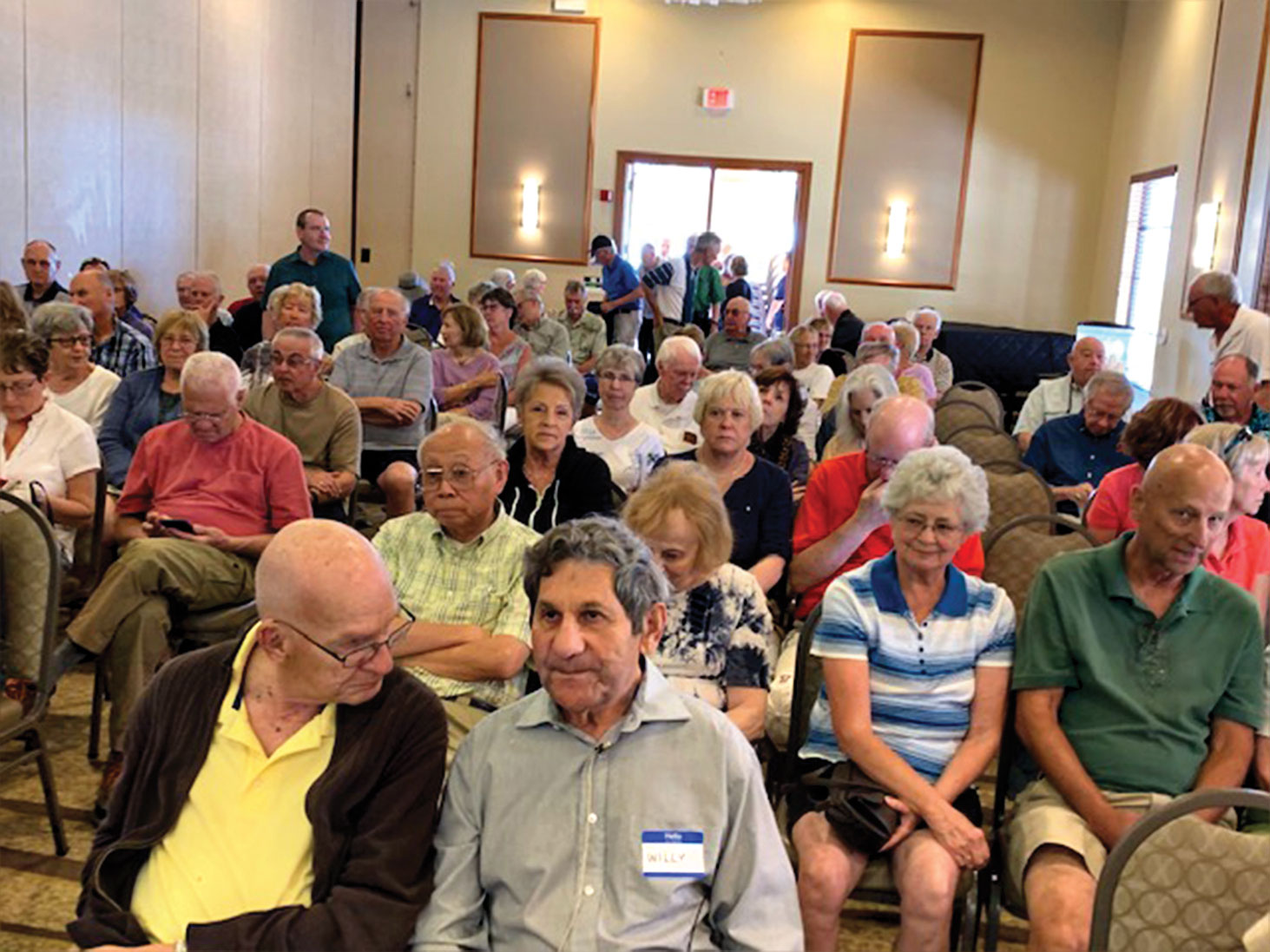 World War II Roundtable member Rupert Brook (left) and featured speaker Willy Halpert converse before Willy’s presentation to the Roundtable on his experiences as a hidden child in German-occupied Belgium 1942-1945.

Until two years ago, the World War II Roundtable was exactly that: a small group of participants who could fit around a table and for an hour or two discussing a war that was global in scale, caused immense suffering and death and hopefully, was the last of its kind to ever befall our planet.

Then a few members decided to broaden the audience by encouraging Roundtable members to research WWII-related topics and present talks to a wider audience. An effort was also made to recruit experts on WWII from outside SaddleBrooke to bolster our homegrown speakers.

Here’s a look back at our presentations in our first two seasons.

The role of women in WWII was discussed by Sherry Kaplan. Her talk went well beyond the Rosie the Riveter image promoted by the U.S. government. Members were surprised to learn women were actually used by the Army Air Force to ferry fighters and bombers from America to Europe. Larry Linderman spoke on the bombing campaign in the European theater as carried out by the U.S. and Great Britain and rationing in the U.S. and Canada. Several SaddleBrooke residents brought in yellowed ration booklets for the rationing talk, relics from their childhood. The surprise attack on Pearl Harbor by the empire of Japan was covered by Steve Reggentin. While it was a masterful military stroke by the Japanese warlords, in the end it proved disastrous for the nation.

Anyone who attended SaddleBrooke’s Ted Sakano’s poignant remembrance of his family’s years spent in a Japanese internment camp following President Roosevelt’s Executive Order 9066 will never forget it. Ted shared photos taken of his family and neighbors while in the camp and some personal items such as his first-grade report card. The U.S. government has since apologized and made token reparations to the Japanese-American community for this hurtful and harmful episode.

Col. Jim Evans, a retired Air Force pilot and director of the Commemorative Air Force Museum at Falcon Field in Mesa, Arizona, spoke about one of the workhorses of the U.S. Army Air Force in WWII, the Grumman torpedo bomber, commonly known as the Avenger. The plane is best known as the one piloted by 20-year-old future-president George H.W. Bush who was shot down in action in the Pacific and by an incredible coincidence was rescued by an American submarine in the neighborhood.

In SaddleBrooke, we are fortunate to have four residents who experienced the war close up as children and shared their memories with us: Ron Fischer, Brenda Larson, David Gould and Jean Castle. Ron was raised as a child in Kassel, Germany, a city which was ravaged by Allied bombing while David, Brenda and Jean saw the war as children in England. Their stories brought home to us the horrors of WWII through the eyes of youngsters.

SaddleBrooke resident, Mary Jo Swartzberg, read a book called Rogue Heroes by Ben Macintyer on Britain’s Special Air Service and delivered an excellent report on it. The SAS was founded to attack the enemy behind the lines and foment disruption and fear. The movie, The Dirty Dozen was Hollywood’s take on the SAS.

Historian Leo Barron, a retired Army officer who now teaches military intelligence at Ft. Huachuca, came to SaddleBrooke to discuss the Battle of the Bulge, Americas bloodiest conflict in WWII. Leo did a masterful job of taking a complicated battle and breaking it down to its basic elements all could understand.

Another SaddleBrooke resident lived through the war as a hidden Jewish child. Willy Halpert was nine-years-old when he was almost grabbed by Nazi Brownshirts in Antwerp, Belgium in 1942. Separated from his parents, he survived the next three years with the help of many brave citizens who shielded him when the penalty for doing this humanitarian deed was often death. His parents and most of his relatives perished. I will never forget Willy’s story of a wonderful Belgian teacher, Andree Geulen Herscovici, merely 20 years old who defended her Jewish students from German soldiers looking to arrest them.

Our last talk of the season hasn’t happened as of this writing. Mark Klicker, yet another SaddleBrooke resident, has prepared a talk on the atomic bombing of Hiroshima, Japan. Mark has a degree in history, has researched the topic extensively and has visited the city several times. As Mark has said, “The decision to drop a nuclear device on a Japanese city was controversial at the time and the controversy continues to this day.” Mark will present his talk on Thursday, April 25 at 1:00 p.m. in the West Ballroom of the MountainView Clubhouse.

Mark’s talk on April 25 will conclude the Roundtable’s season. We will start up again on October 24. Lots of great speakers are already scheduled. Watch this space for details.

I would like to note the recent passing of Ed Lawrence, a SaddleBrooke resident of many years, who founded the Roundtable. His knowledge of WWII was amazing and it was he who inspired me and others to delve deeper into its history. Ed often mentioned the famous quote from the philosopher George Santayana, “Those who do not learn history are doomed to repeat it.”