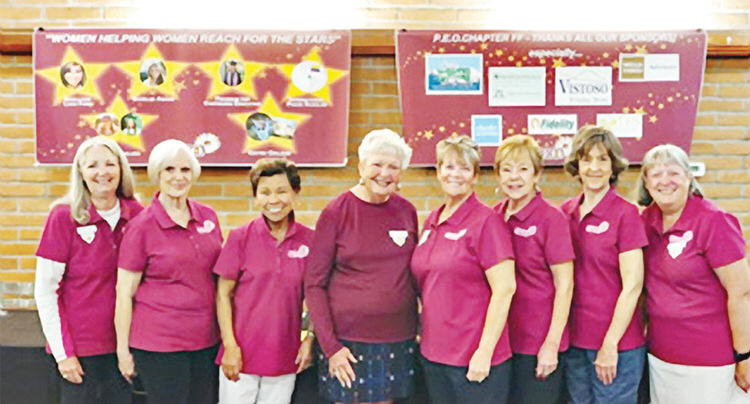 Planning and organizing a major fundraiser takes a village, as the saying goes. And, of course, a major fundraiser does not come together overnight, nor even after several weeks, nor through the work of just one person. A major fundraiser has the components of stellar leadership, planning, organizing, and deciding upon logistics for the event, as well as engaging many volunteers who will ensure that the mission of the fundraiser is carried out.

All of these parts came together for the P.E.O. Chapter FF golf tournament fundraiser, titled Shooting for the Stars, which was held on Nov. 6, at the Randolph North Golf Course in Tucson.

Sandra Murray, P.E.O. Chapter FF representative and organizer for the event, developed the idea of a P.E.O. golf outing in order to raise funds for the organization, as well as to bring awareness of P.E.O. to the community.

A year in the making, the fundraiser was an event to remember, to be sure. Clearly, there were no stones unturned when it came to the silent auction items and the raffle items that were on hand. In addition, the food choices for the day were also exceptional!

Sandra ordered up a perfect day for the participants. An ample breakfast buffet of fresh fruit, pastries, and yogurt was enjoyed prior to the golfers heading to their respective holes for the shotgun start. Each participant was given a goodie bag of golf course essentials, including lip balm, hand sanitizer, and ball markers, among other items. The field of 85 players included women and men who were eager to play and enjoy the picturesque and vintage course.

A few factoids about the course:

The golfers returned to the clubhouse to enjoy a sumptuous buffet lunch of south of the border delights of tacos and enchiladas and to discuss their good and/or errant drives, as well as missed putts.

The day’s golf notwithstanding, the golfers were treated to the awarding of the raffle and silent auction prizes, followed by the announcement of the winners for the different flights, as well as for special events of the day, such as the longest drives, etc.

All of the hard work of Sandra and her many capable volunteers (20-plus), who worked in front of and behind the scenes, paid off. It also cannot be overstated that the P.E.O. Chapter had a hand in ensuring that the event was successful. Over $23,000 was realized from a year of planning to bring the successful P.E.O. Chapter FF golf fundraiser to fruition.

The P.E.O. (Philanthropic Educational Organization) was founded over 150 years ago in Mount Pleasant, Iowa and is considered one of the oldest women’s organizations in North America.

During its history, P.E.O. has expanded to more than 6,000 local chapters that include 210,000 members in the United States and Canada. P.E.O. has a legacy that has been passed down for generations and has brought together more than a half a million women to advance through education, while supporting and motivating them. In turn, P.E.O. (which is a nonprofit organization) has provided over $383 million in grants, scholarships, awards, and loans to women all over the world.

If you would like more information about P.E.O., go to www.peointernational.org.