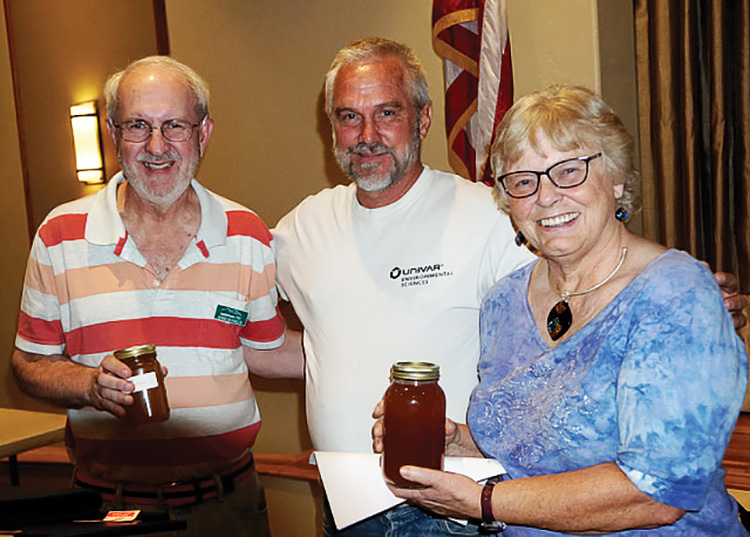 The season opener for SaddleBrooke Nature Club featured a neighbor who also happens to be one of the world’s leading experts on honey bees.

Steven Thoenes PhD grew up nearby in a family which raised honey bees. He continued the tradition and now has 45 years of experience as a bee keeper. Thoenes also studied right through the graduate levels in subjects such as chemistry, biology, and entomology. He has been featured in many well-known publications such as National Geographic.

Thoenes travels some 60,000 miles a year consulting around the world and in the southern United States.

He frequents SaddleBrooke removing bees’ nests from buildings and other areas. He has created a preventative system for the HOA to keep bee nesting at a minimum. His business is Bee Master, Inc based in Tucson.

We’ve all heard of the worker bees. Do you remember they are all female? They do all of the work. And they are the ones which sting.

And the males are called droans. They do no work, are fed by the workers and they can’t even sting! Then there is the Queen. She is half again as large as the workers. She lays 1500 eggs a day. She can decide which eggs will be female by adding sperm to their six-sided cell.

The baby bees (or broods) spin cocoons from a gel that the worker bees produce in each cell. After 21-24 days the top of the cocoon is chewed off so the brood can come out. The hive continues to keep the bees at proper temperature and nourishment until they have matured.

Arizona has 800 species of honey bees. None have suffered from Colony Collapse or disease. In fact, government surveys have reported an increase in hives every year!

Africanized bees are a temperamental relative of the honey bee. They are more aggressive and they respond more quickly to possible threat to their colonies. They are resistant to disease caused by mites. They are not used for agricultural purposes because of their aggressive nature. They are found throughout Arizona.

Why do bees sting? They sting when their colony is threatened. Landscapers and people who operated large equipment are most frequently the victims of bee stings. Unless an average person is severely allergic to bee stings, up to 1,000 stings should not be fatal.

A child might withstand up to 500 stings. Dogs are more vulnerable as they are usually tied up, unable to escape.

If you are attacked by bees, cover your nose and mouth, and run. They usually will not pursue you 100 yards beyond their hive. Do not jump into water. Bees will wait longer than you can stay under. Remove the stinger immediately. It’s not advisable to wear black, red, or dark brown around bees. (That’s why bee keepers wear white.)