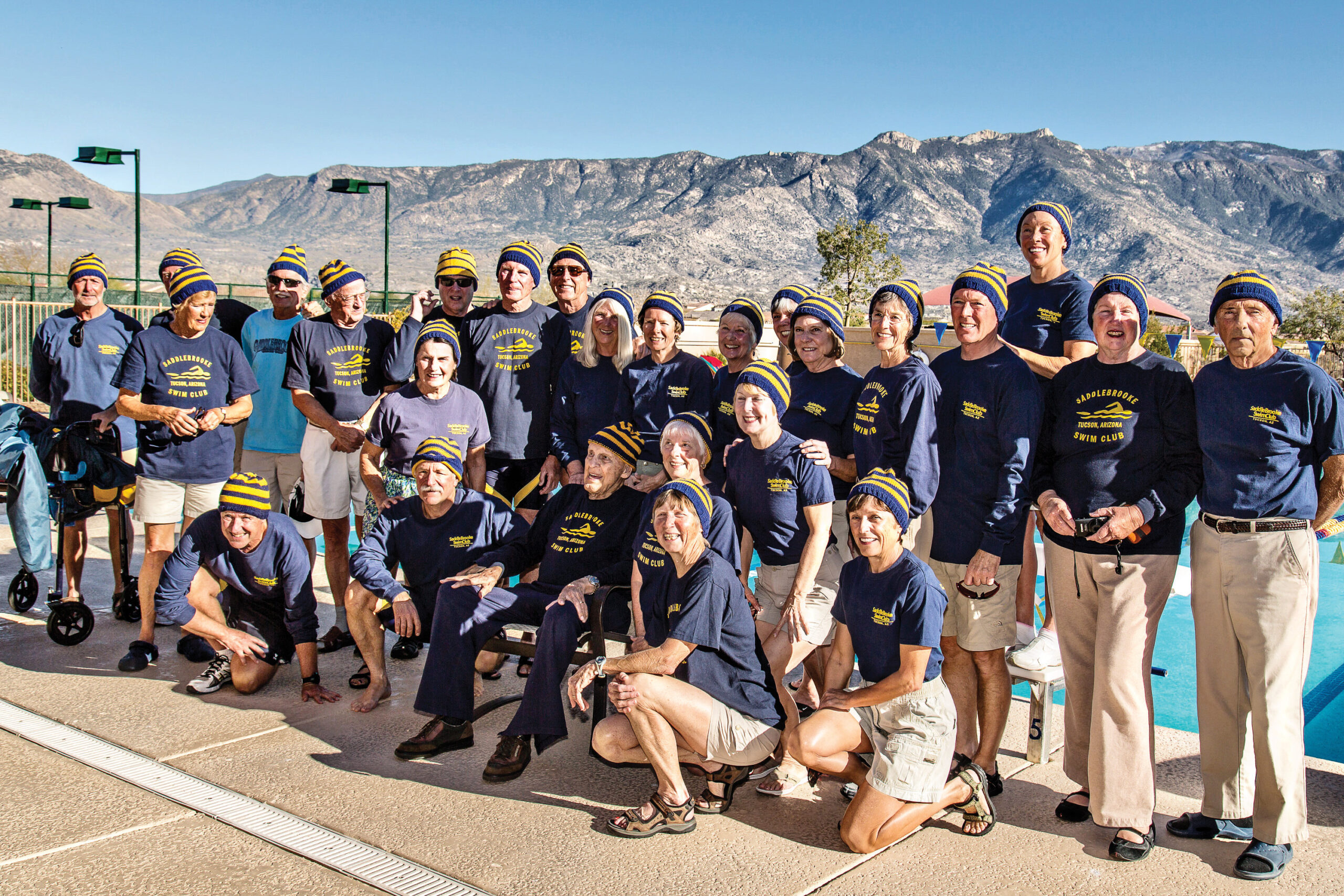 Elizabeth Henley
Service
The club has raised money for several other clubs and activities here in SaddleBrooke, including pickleball, softball, the dog park, and the multi-use court behind DesertView. We have donated equipment to the San Manuel high school swim team, and one of our members coached there for several years. Several members still donate money to that club via the Arizona tax credit.
For many years, the club has hosted an Easter Egg Hunt for visiting grandchildren as well as Grandkids’ Pool Games. We have also regularly provided timers and officials at several meets held at Oro Valley.
In 2015, Lyn Moreno, our current president, coach, and one of our most dedicated volunteers, started the Let’s Swim program. This program is to help people get back into swimming after some absence. It involves teaching techniques, individualized coaching (with at least one volunteer club member assigned to each lane) and conditioning. Initially, the program met twice a week for six weeks and was held four times a year. More recently, the program has been offered in March and October; Mark Randall and Steve Trousdale share in the leadership of this group. This program has not only helped residents feel better about their swim abilities, but Coach Lyn says that typically about one-fourth of the club’s membership is made up of recreational swimmers, many of whom are graduates of this program.
In 2019, Terese Butler started the Adult Learn to Swim program. This program is for non-swimmers and includes participants who are or have been absolutely terrified of the water. It involves one-on-one coaching from members of the club while taking overall direction from Terese. This instruction really works!
There are many other ways that club members and its officers provide service for each other. A partial list includes:
* Coaches, who are on deck most days for at least an hour, and some as many as three hours
* Planning and printing out workouts for six weeks during the summer when we suspend regular coached workouts
* Serving as timers and referees for meets, some in which SaddleBrooke does not participate
* Organizing the participants at meets—“herding the cats” (Nancy Springer, Gisela Peter, and others)
* Photographing our events (Bob Shea, Roger Bivens, Jeff Eighmy, and others)
* Knitting Club hats for all members (Jill Fritz)
* Planning parties and celebrations for the club (active social committee)
* Creating beautiful art pieces for the President’s Award, which is presented each year (Terese Butler and Candy Armstrong)
Several of these activities can’t be held during the pandemic but will resume when it is safe.
Many of these leadership roles, including coaching and refereeing, require certification; those are obtained on a volunteer basis and at the expense of the person getting them.
Club Details
Dues for club membership are $20/year, which includes a club shirt. You can learn more about the club and find a link for workout signups at our website www.SaddleBrookeSwimClub.org. We welcome new members.