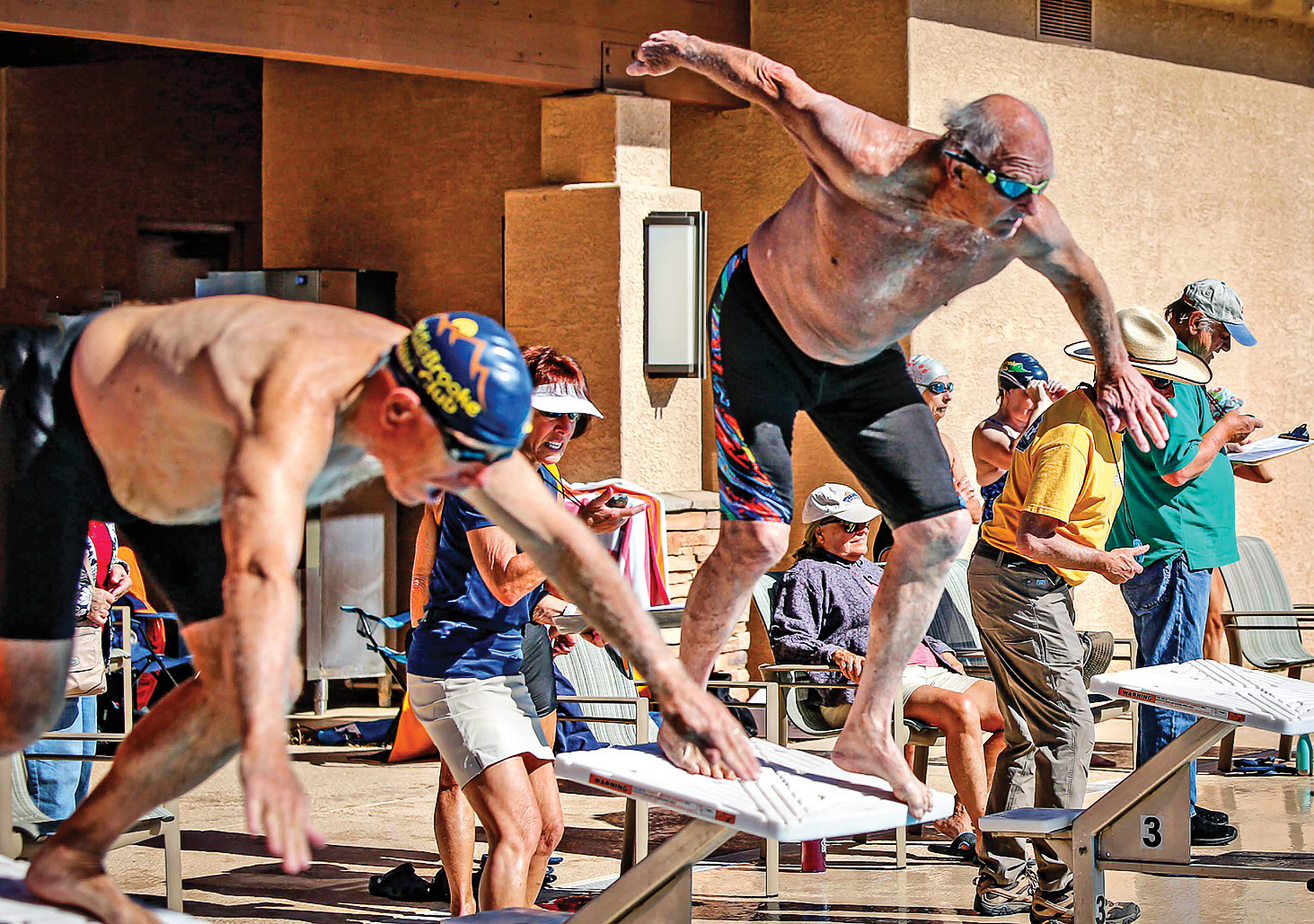 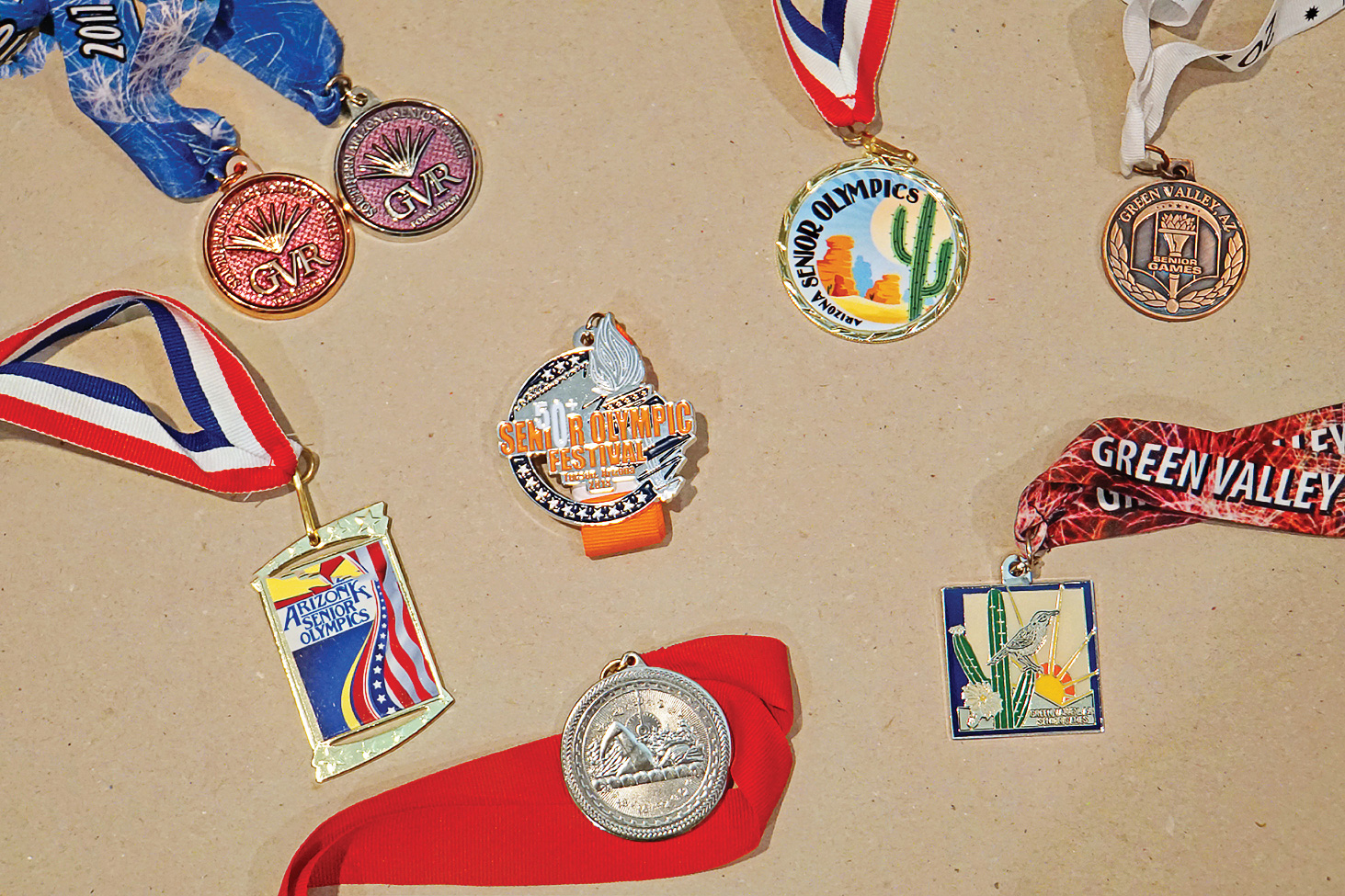 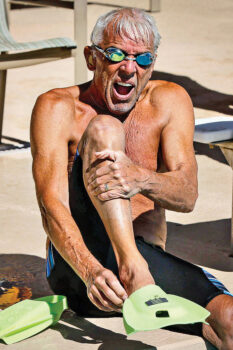 Getting ready to race with fins (Photo by Robert Shea)

Some of our members joined the club to participate in competitive events, and many of us were convinced by a very persuasive past head coach, Coach Doug, to do so.

Club members generally have participated in events sponsored by our own club, Senior Olympics, and the United States Masters Swimming association (USMS), which sanctions its events.

Here are some generalities that some people may not know: generally speaking, we compete in five-year age brackets—for example, 50-54, 60-64, etc. Most events are all male or female, but some are mixed. Competitive events include four basic strokes: freestyle, backstroke, breaststroke, and butterfly. One can compete in multiple distances of each stroke and all strokes in one race known as the Individual Medley (IM). Our coaches teach us the rules, good stroke technique, and how to do starts and turns.

Meets are held in pools of three different lengths, and meets are named accordingly:

Here are two “secrets” that have made our club very successful in competitions:

* The older the age bracket, the fewer participants there are. Therefore, as a team composed of seniors, we have a much better chance of winning than a team representing all ages.

* There are fewer participants in the long races than the short ones, so some of us slower swimmers swim the long races and win more team points and medals that way.

In recent years, the club has held an Intra-Squad club meet early in the spring. This meet provides an opportunity to start the competitive season in a fun atmosphere and get used to the many rules that apply to meets. Sometimes, the coaches include events, such as dog-paddling or swimming with fins, that are not allowed at sanctioned events.

Senior Olympics events are a great opportunity for individuals to compete and earn medals. Popular events for club members are held in Tucson and Green Valley. Doug Springer and Harold Peter, among others, have gone all the way to nationals with the Senior Olympics.

Another form of competition in which members have participated is the triathlon, which consists of swimming, running, and biking. The most famous of these events is the Ironman, which takes place in October every year in Hawaii. This race consists of a 2.4-mile swim, a 112-mile bike ride, and 26.2-mile run. To date, ten individual club members have entered and completed the Ironman, several more than once. Many others have completed other triathlons.

Note: Once the pandemic set in, competitions were cancelled. I’m certain that Coach Terry will continue the club traditions and establish some of his own.

Dues for club membership are $20/year, which includes a club shirt. You can learn more about the club and find a link for workout signups at our website at www.SaddleBrookeSwimClub.org. We welcome new members.