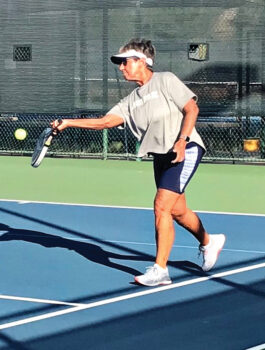 There’s been a buzz around SaddleBrooke about pop tennis. What is it? Pop tennis is the revitalization of a 100-year-old sport which is increasingly being popularized due to a shorter court, underhand serve, and a pop racquet. The racquet is often called a paddle, which is a derivative carbon fiber and composite foam core. There are no strings on the paddle, but it does have holes drilled throughout the face of the paddle. The International Pop Tennis Association has adapted the “green dot” ball, because its internal pressure is reduced by a certain percentage of a standard tennis ball. SaddleBrooke One generously provides paddles for those incoming players who may be interested in playing pop tennis. You can check out a paddle at the SaddleBrooke Tennis Center or there are paddles in a lock box by court 5 and 6. Your pool key will open the box, just make sure you lock them up when you’re done.

Pop tennis uses the traditional tennis courts, but doubles are played using the singles lines (no doubles alley) and the baseline is closer to the net. All serves are underhand, and you only get one serve unless it’s a “let” serve. When serving you can bounce the ball before hitting or hit it out of the air to start the game. Contact with the ball must be under your waist. Scoring is exactly the same as tennis: 15, 30, 40, game, includes deuce format.

Current pop players include tennis, racquetball, pickleball players as well as newbies that have fallen in love with this sport. If traditional tennis is getting harder on your body (knees, shoulder, elbows), please take the time and check out pop tennis.

In the near future, Chris Madsen, STC pro/instructor, will be offering demo lessons to all SaddleBrooke residents who are considering being involved in pop tennis. He has vast experience and knowledge of pop tennis and is available to both male and female players.

Come check it out and see what all the pop tennis talk is about!