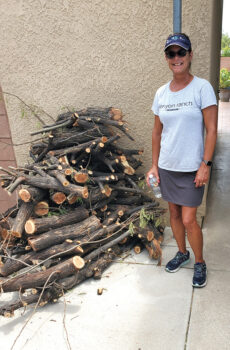 Anyone can post articles for sale, or for free, on Nextdoor once you register.

Nextdoor covers just your local area such as SaddleBrooke, or surrounding neighborhoods. For example, I responded to a post of free mesquite lumber from a tree being cut down about 30 miles from my home. When I mentioned I was interested, but was pretty old and it would take me some time to bring my clippers and trim some of the smaller limbs, the owner responded by asking me what size would I like my logs to be and said her brother would cut me some.

Wow, was I surprised? They said the logs would be ready on Saturday. I arrived and the tree was almost gone as neighbors were stacking huge logs into their trucks.

A lady motioned for me to pull my Odyssey into her driveway and there was a huge stack of cut mesquite logs the size I had requested. When I got out and introduced myself, the lady I had been communicating with identified herself as Micci and she said I could have as many of the logs as I wished.

Then she asked if I was wearing gloves, and went to get me a pair when I said no.

Then she helped me load my van!

Yes, it was all free, but I insisted on giving her two of my recently published books. She started to refuse, but I told her it would make me feel good about accepting her free logs.

When you register on Nextdoor you can offer items you no longer need or want for sale. If you just want to give them away, you can do so.

Fire logs for two books? Yes. We both enjoyed the exchange.