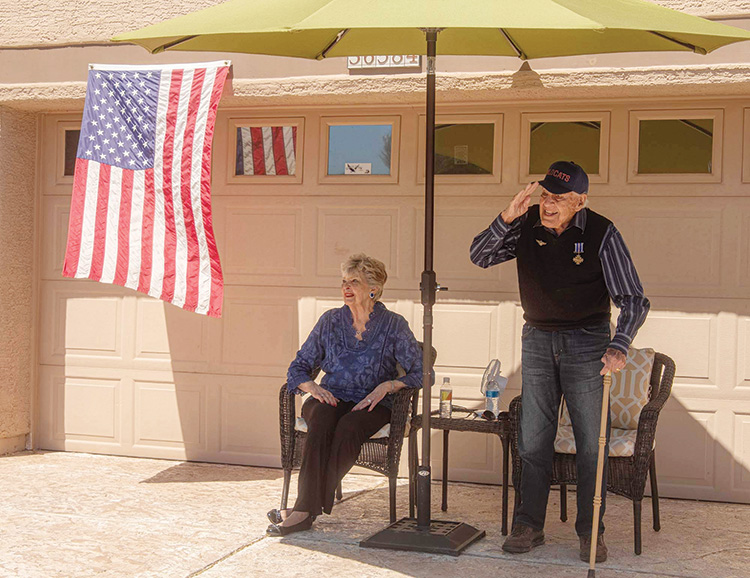 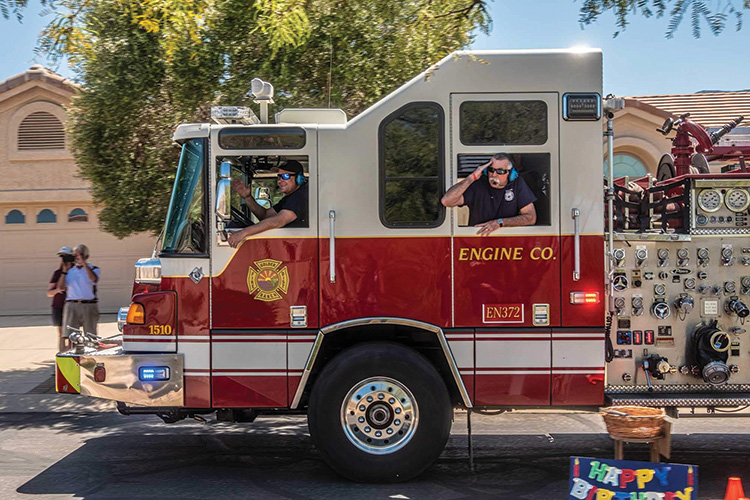 SaddleBrooke’s most senior resident celebrated his 104th birthday on April 25. Fred Klein truly enjoyed the huge parade that passed his house that morning. It was one of the most memorable birthdays of his life.

Organized by his fellow swimmers from the SaddleBrooke Swim Club with a lot of help from many other service groups, Fred saw over 220 vehicles pass his house. Over 150 birthday cards were dropped in a basket along with balloons, signs, and even a roll of toilet paper! Fred will enjoy reading each card. Someone even left a book from Dartmouth University, Fred’s alma mater, with a letter in it written by the University President congratulating Fred on reaching 104.

Due to social distancing guidelines in effect, only golf carts and cars could participate in the parade. The line-up of vehicles began at 11 a.m. on Saturday morning on Ridgeview Drive with the parade kicking off at 11:15 a.m. Special thanks should be given to the SaddleBrooke One Patrol for their unexpected, but greatly appreciated, help in lining up the parade, along with SaddleBrooke Swim Club members Debi and Steve Truesdale. Additional thanks to other club members who helped make the event a success, including Bob Shea as event photographer, Bill Ton and Jay Selznick for managing road detours, and Doug Springer as organizer.

We were very happy to have the parade led by the Golder Ranch Fire District as well as the Pinal County Sheriff’s Officers. We sure hope that they noticed Fred salute them as they passed by. He, as well as the rest of our SaddleBrooke community, greatly appreciate all the dedication that these two vital service groups provide to our community.

We are sure that this event will be remembered by everyone who participated, as well as the whole SaddleBrooke Community, for many years to come. It was a great party, all done with social distancing. The SaddleBrooke Swim Club joins with many of our other clubs and organizations in hoping that we continue to stay safe during this time and can look forward to a day in the near future when we can return to the new normal.