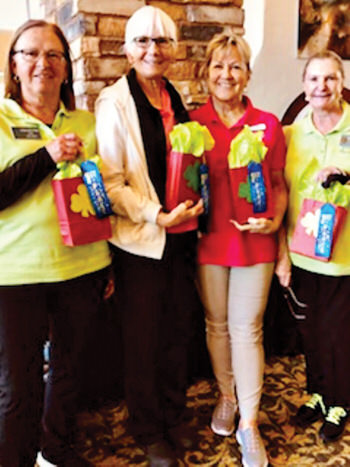 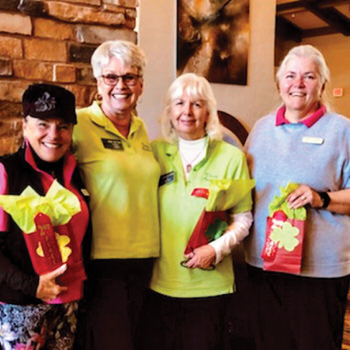 On March 7, the sun was shining, the air just a little chilled, as 72 Sputters and Ranchettes (from SaddleBrooke Ranch) congregated upon the putting green at SaddleBrooke One. Teams of four included two Sputters and two Ranchettes. Sputters all were dressed in their verde-colored shirts, and the Ranchettes were in their red/pink shirts, so we could easily tell who was who. I saw a couple players jump and holler as they made a hole-in-one! I don’t know how many holes-in-one were made, but I saw Sputter Donna Bujnovsky make one and Ranchette Jackie Boll make another one. Karen Simmons, Donna McPherson, and Hazel Roper set up the course layout, and Elaine Ackerman, Mary Lindsey, and Cathy Howard did check-in, both for the playing and for the luncheon.

Afterwards, 81 Sputters and Ranchettes joined together in the Vista dining room for fun and games and lunch. The theme was St. Patrick’s, with shamrock plants decorating each table and a St. Patrick hand towel for each person to take home. Each table place setting had an Irish name, and the name Brianna at each table was the winner to take home the shamrock plant.

Our presidents, Lydia O’Connor and Barb Rempel, and the Ranchette president, Jacque Hendricks, welcomed everyone and thanked Jodi Walker Lowe, Ranchette coordinator, and Marilyn Palatas, Sue Ryan, Donna Lemier, Tara O’Donnell, and Susan Cluley, who worked all the details to bring it all together. Thank you again, ladies, for all your hard work!

Donna Lemier, as master of ceremonies, announced the winners of that day’s games, but not before the score verifiers, Judy Anick, Jeanne Moehn, Ginny Porteous, and Lisa Lefebvre, checked and rechecked the numbers to come up with the first, second, and third place winners—and for those who were putting-challenged, last place award! First place winners were Sputters Carolyn McLean and Susan Delago and Ranchettes Loretta Gresham and Mary Stastny; second place were Sputters Carol Jones and Jill Jepson and Ranchettes Doris Carlin and Donna Lura; third place were Sputters Mickey Levich and Deborah Gryniewicz and Ranchettes Jacque Hendricks and Judi Townsend. Last place were Sputters Jan Deschamp and Karen Martin and Ranchettes Susan Eggleston and Nancy Eisenstein. Their gift was a plaque that stated, “Friends don’t let friends 3-putt!” First place winners won a flask (don’t leave home without it), second place prizes were wine tumblers, and third place prizes were ball markers. We all had so much fun, and we hope to do this again. There was actually a tie for first place, and the winner was determined by the team who had the lowest score on hole 8.

Sputters held the Marj Cattrell Invitational on April 3. After putting, they met for dinner at the Vistas of the SaddleBrooke One Clubhouse. This is a special and unique event held once a year.