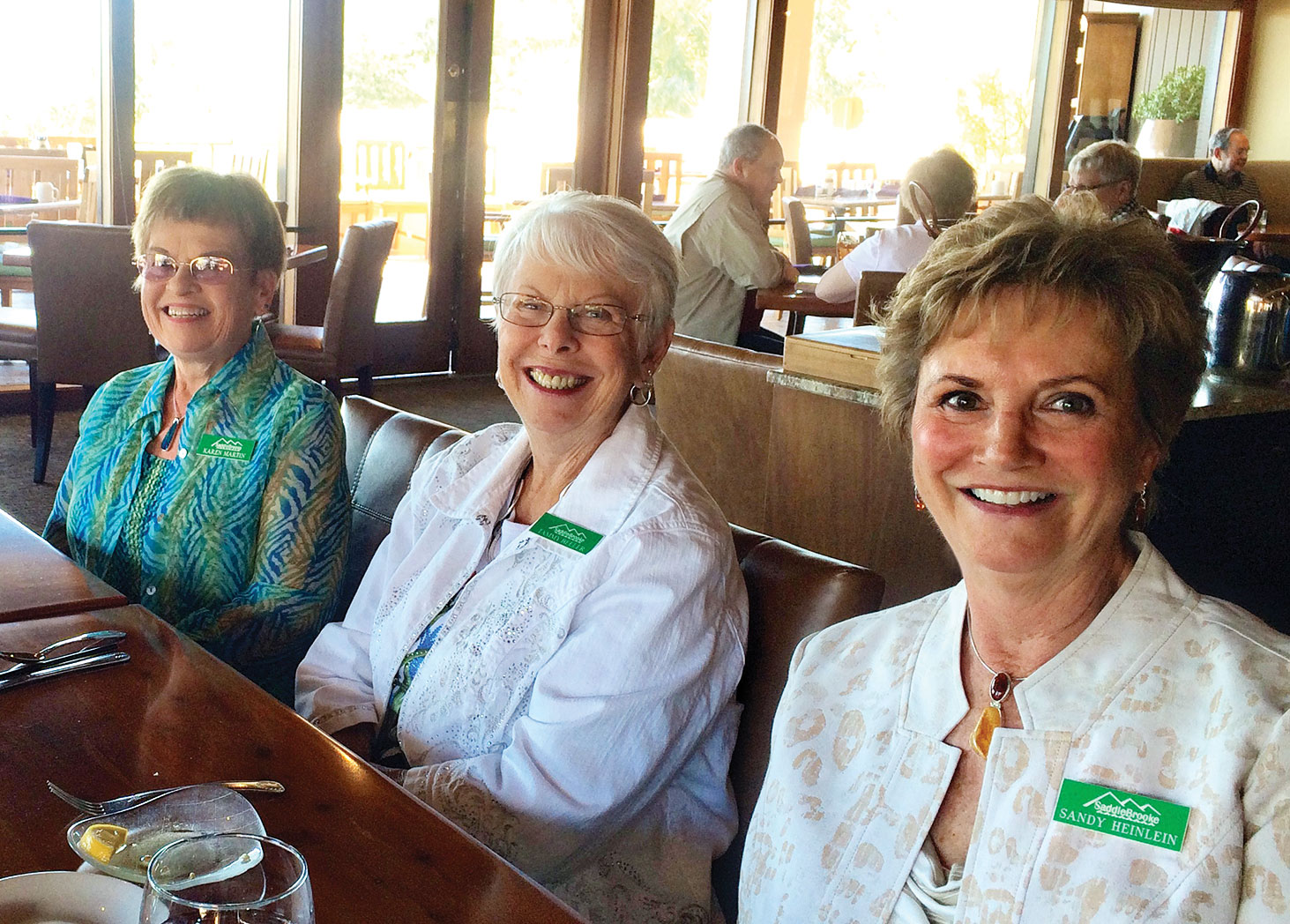 On March 6, 2015, twenty seven ladies from Unit 21 in SaddleBrooke gathered at Westward Look to renew old friendships and make new ones while dining in the beautiful Gold Room. The event was planned by the two wonderful hostesses, Tammy Beeler and Karen Martin, who made all the arrangements. The food and service were excellent as attested by all that gathered. As an added show of appreciation by the restaurant each woman was given a Buy One, Get One Free coupon for their next visit along with complimentary cookies for everyone. After the luncheon many of the ladies took a stroll through the lodge’s well stocked gift shop. 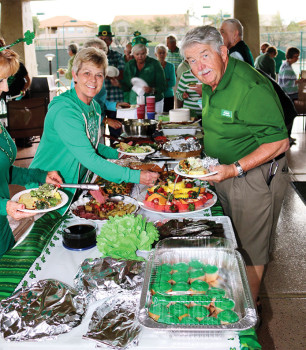 Dining up at the food table are Pat Andrea (left) and John Martin.

Who said you had to be Irish to enjoy St. Patrick’s Day? It just so happens the biggest requirement is to put on some green clothing, a big smile on your face and, of course, an appetite for some great Irish food.

The event was held at the HOA1 Tennis Center facility where over forty one Irish and want-to–be Irish kicked off the first St. Patrick’s Day celebration held by the Unit 21 Social Committee.

How long has it been since you have enjoyed Irish stew, soda bread, colcannon (Irish dish of kale and potatoes boiled and pounded), Sheppard’s pie, corn beef sliders with mixings of fruits and vegetables? That should be enough incentive to make sure you sign up for next year’s gathering.

As with any celebration of St. Patrick’s Day, it wasn’t long before loud, clear voices were singing When Irish Eye are Smiling, I’m Looking Over a Four Leaf Clover and a special rendition of Oh, Danny Boy from the trio of Al Mollenkopf, Doug Lombardia and Chuck Fries. You can be sure the tears were flowing all the way back to Ireland. Al and Midge Mollenkopf made sure of that as they provided the karaoke machine so that those wonderful Irish tenor voices got the respect they deserve.

Special thanks go out to Judy Saks and her volunteers for organizing this event and who knows if you attend next year you may even find that pot of gold. 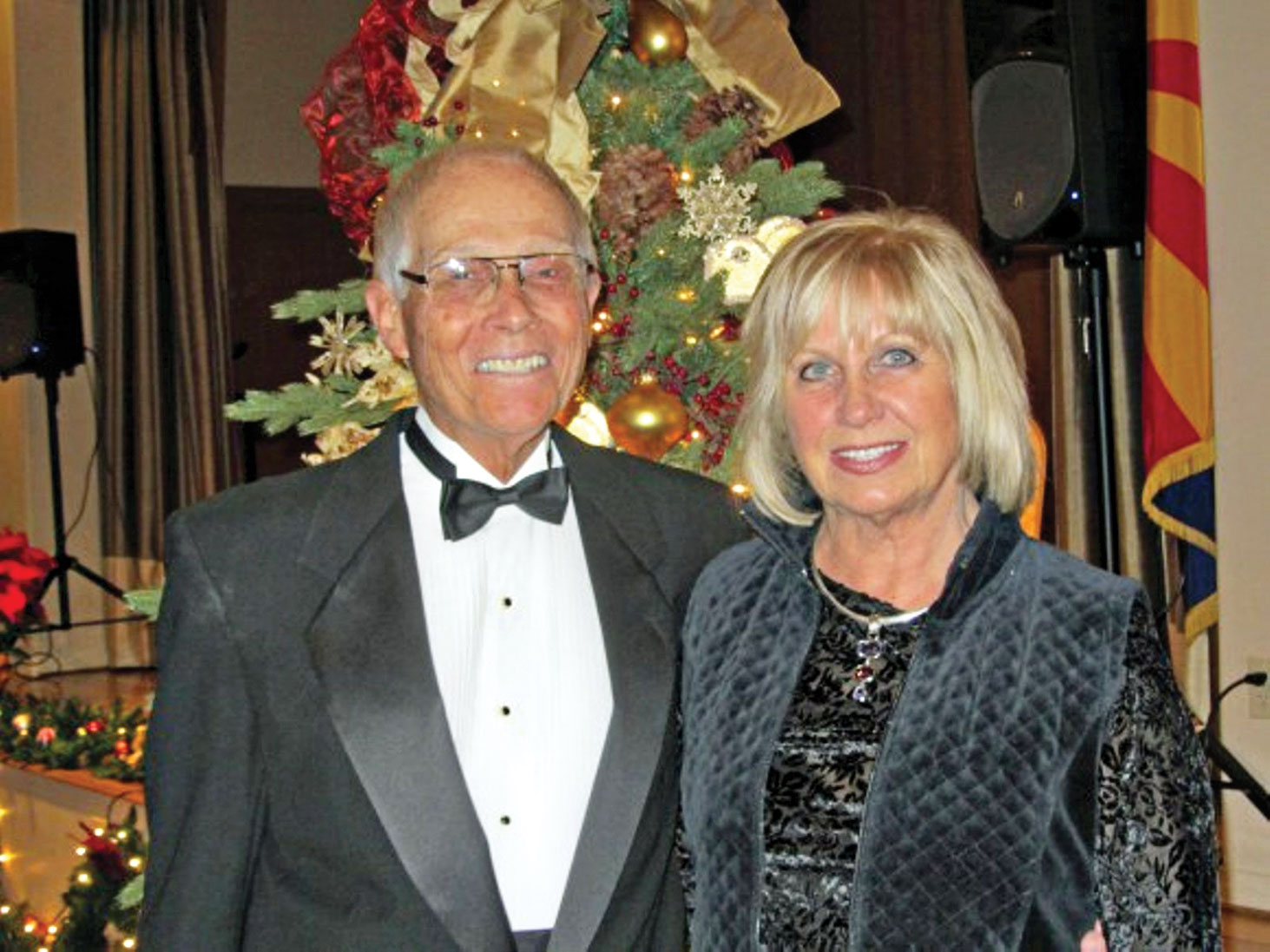 Unit 27 residents have kept active during the winter months of 2015, although reports of such activity have been limited thus far; therefore, a recap is in order.

Unit meetings have been held in February and March and each meeting has included some interesting discussions of topics ranging from common area maintenance, emergency contacts and food. Jan Talbot arranged for Food & Beverage Director Joseph Speers to speak and answer questions at our March 3 meeting and that generated considerable discussion. Everyone came away from that meeting with the hope that Joseph will be able to turn around his organization and produce a superior product that a majority of HOA2 residents will enthusiastically support.

Eileen and Len Raab hosted a unit Snack and Chat on January 23 and many of the unit winter residents were in attendance along with the regulars. Also attending were the unit’s (then) newest residents, Barb and David Lancaster. The party was held both inside and out, thanks to the warmth provided by the hosts’ outdoor fire circle.

No Snack and Chat was held in February due to illnesses in the families of both the intended and back-up hosts. However, Sandy and Phil Barney put us back on track by hosting a Snack and Chat on Saturday, March 21. Sandy was initially concerned that there may not have been ample notification. However, considering the wonderful weather, and all the other competing activities in the area, it was actually quite well attended. As usual, no one ever goes home hungry from the Snack and Chats and this one was no exception. The Barneys’ visiting granddaughter mingled with the attendees and provided additional charm to the event.

After coordinating the unit Dine Around events for several years, Karen Spalter decided to step down; and the dynamic combo of Fira Stout and Janie Grinstead agreed to take over those duties. Their first selected restaurant was Li’l Abner’s Steakhouse and approximately 25 unit residents met there on Tuesday, March 24. Li’l Abner’s Steakhouse started life in the early 1800s as a Butterfield Express stage stop and the restaurant and bar have continuously operated since 1947. It certainly has a vintage old west look and feel to it. The food is all cooked outdoors and several times a week (although sadly, not on the night we were there) they have live music for dancing. Everyone seemed to be enjoying themselves and certainly no one went away hungry!

It is with profound sadness that we had to say goodbye to one of Unit 27’s earliest residents, June Stoebner, who passed away in Hawaii on February 8, 2015. Known for her artistic and culinary talents, she lived her life with zest. Our heartfelt condolences and best wishes go out to her husband Don Stoebner.