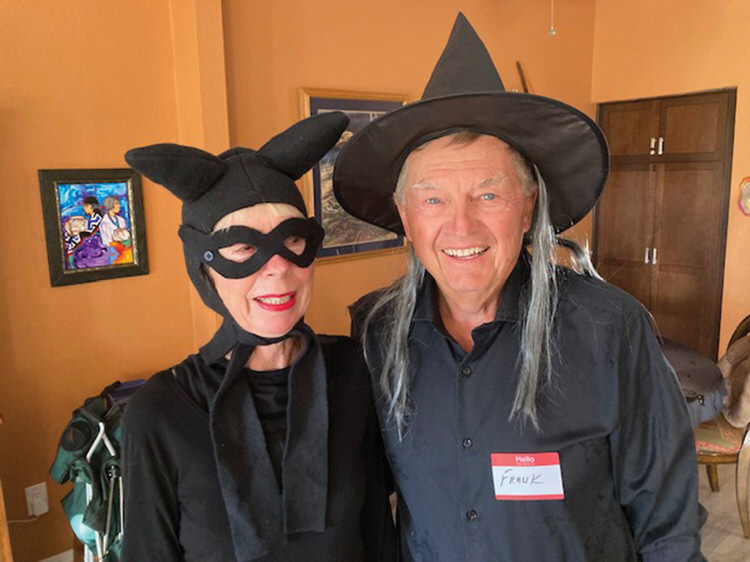 On Oct. 31 a Unit 2 gathering was held at the home of Barbara and Bob (aka Bob-cat) Allen. Costumes were optional; however, the majority attending were dressed for the occasion. A coven of witches, their familiars (cats), pirates, athletes, a member of the Addams family, cowgirl and cowhand, and others in pumpkin orange got together to enjoy wine, conversation, and assorted treats. A good time was had by all.

We are looking forward to the holiday dinner with Units 18, 19, and 16 in December, as well as other pre- and post-holiday events. 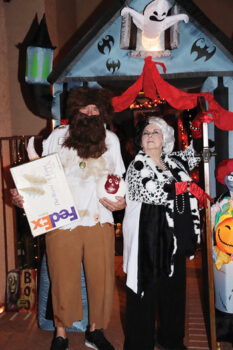 Unit Nine held its annual Halloween Party at the home of Tom and Gretchen Houston who always go over the top with Halloween decorations. Sky Blue Court cul-de-sac gave plenty of party room for 68 costumed attendees to have a fabulous time enjoying shared hors d’oeuvres, desserts, and BYO beverages. The party was a howling success (yes, even a four-footed costumed guest!). Unit Nine wishes to thank Tom and Gretchen for their hospitality and another wonderful party.

Lots of Treats (No Tricks) in Unit 17

Pictured are Unit 17 contestants for the annual costume judging. Robyn Gearheart (the scarecrow) was the winner.

When Unit 17 throws a Halloween party, we really know how to do it. This year’s concept was a first for us, but quite successful! Instead of cooking, we hired a very popular food truck. Fifty-four meals were prepared, but more resident spooks and goblins came to the Halloween party. The Halloween event was held in one of our many cul-de-sacs. Residents brought their own chairs and dressed in costume.

We played the traditional cornhole as we gathered with our friends. The Stoney Flower Bakers were at it again. They made loads of delicious homemade cookies that were devoured by the attendees. And then there was the annual costume contest. Using applause, the best costumes were judged. It’s just another fun party in the Unit 17 paradise!

Our next big gathering is the holiday dinner and dance at the RoadRunner Grill! Hope to see everyone there! 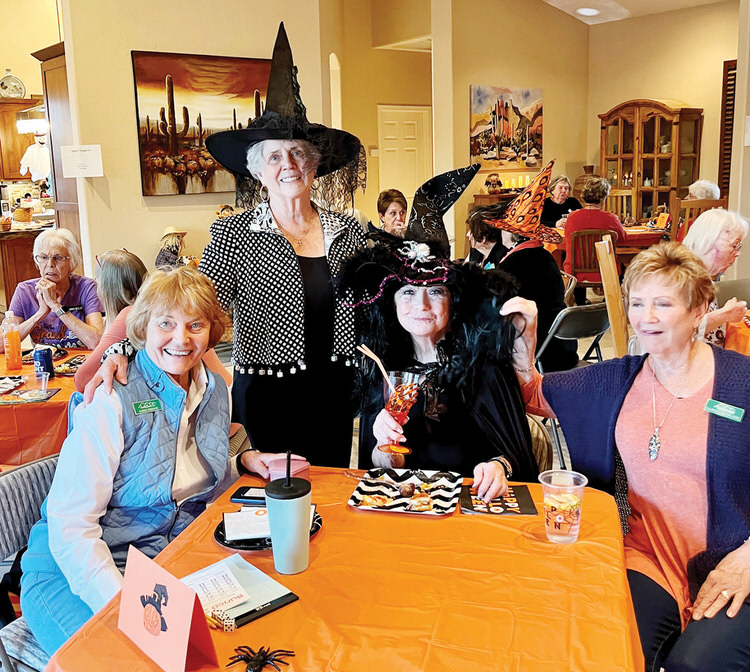 Twenty-one ladies gathered for food, drinks, bunko, costumes, and lots of giggles at Linda Ansay’s home on Oct. 25. Prizes were awarded for the top four costumes, in addition to the bunko. Everyone had a screamingly good time. 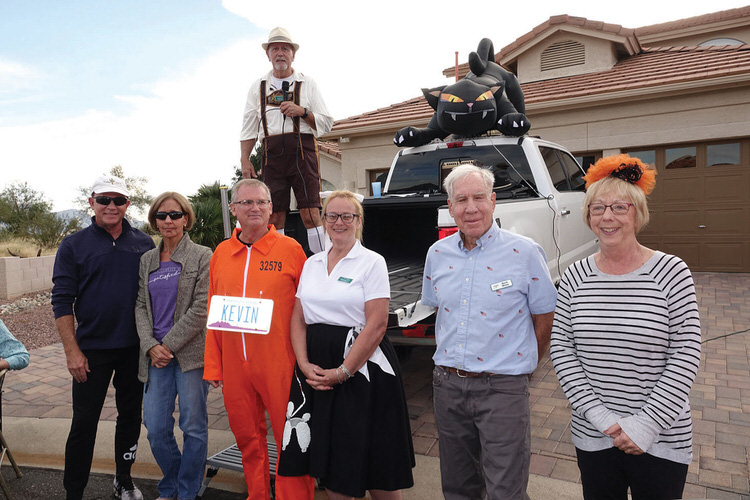 Oct. 30 was an especially beautiful day for Unit 24. That was when we held our annual block party to welcome our snowbirds home. The Unit is never quite the same when they are away. This year’s theme was Halloween. No Halloween party would be complete without a costume contest and parade. This year’s costume winner was Bill Pike who was the Tooth Fairy.

There were 90 residents in attendance. We spent hours catching up on everyone’s news, introducing our newest residents to the Unit, and, of course, enjoying good food. There was fried chicken, baked beans, devilish eggs, many sides, salads, and, of course, desserts.

The day began early for those on the Social Committee. There were tables to be picked up, chairs to be brought in, and tablecloths to be put out. A special thank you to everyone (especially the truckers). When the party was over, everything had to be taken back down. A lot of work, but so much fun. Thank you to everyone for making this such a success. 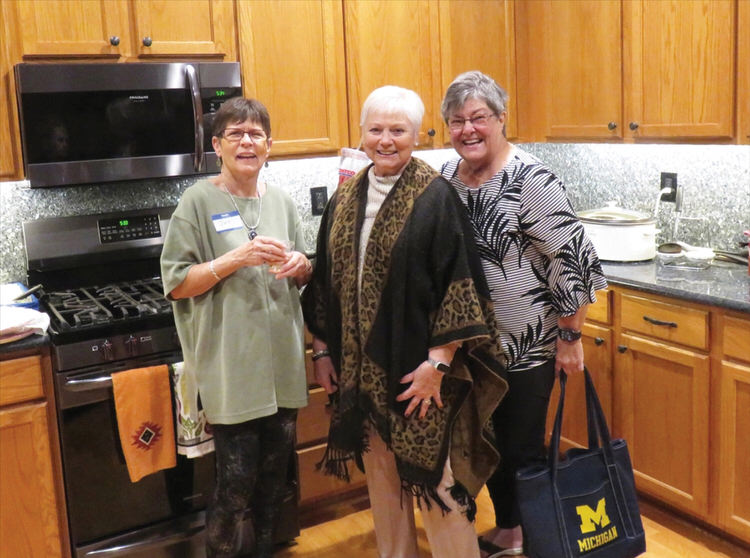 Jan, Sandy, and Fira in the kitchen at the Merlini Snack and Chat (photo by Ron Talbot)

A large group of apparently ravenous Unit 27 residents descended upon Carol and Richard Merlini’s house on Nov. 12 for the monthly Snack and Chat, talking and eating their way through virtually all the food they brought to share with each other. Hopefully, no one was counting on taking home the food they had brought that night! Perhaps the cooler temperatures made everyone hungry. It was nice to see Dan Weiler, recently recovered from surgery, and his wife Flo, happy to have a break from babysitting. Sandy and Phil Barney came for a fellowship and a quick meal prior to attending an SASO concert at DesertView. Those attending the Snack and Chat were seen eating and chatting in the kitchen, family room, dining room, and outdoors on the patio. The trend seemed to be women inside and men outside! As always, it was a good time. Thanks to Carol and Richard.

Phil Doyle reports that those who played in the Nov. 14 monthly golf mixer/scramble were treated to perfect weather after a frost delay in the morning’s play. All teams finished at par or below, and the team of Don Erickson, Terry McCarthy, Betty Cole, and Janet Drake, as well as the team of Terry Turner, Jeff Depka, Lynda Dolejs, Carol Merlini, and Jan Talbot shot identical total and per-hole scores. They were unable to break the tie, and the winning prize was split among both groups. Carol Merlini was closest to the hole for the women, and Phil Doyle for the men. Richard Merlini and Chris Lomax shared the award for Most Valuable Putter, sinking eight of nine putts, respectively, for their teams. Betty Cole was awarded Shot of the Day with an impressive long-distance approach shot, followed by a great putt. As always, the after-party at the home of Anne and Phil Doyle, with drinks and good food, gave the golfers plenty of opportunity to talk about their golfing exploits.

The Unit 27 Bocce outing was held on Nov. 17. According to Fira Stout, four residents played, and John Gill was the “Best in Class.” Congratulations, John, and thanks, Fira.

The Unit 47 Men’s Club enjoying breakfast at the Mesquite Grill.