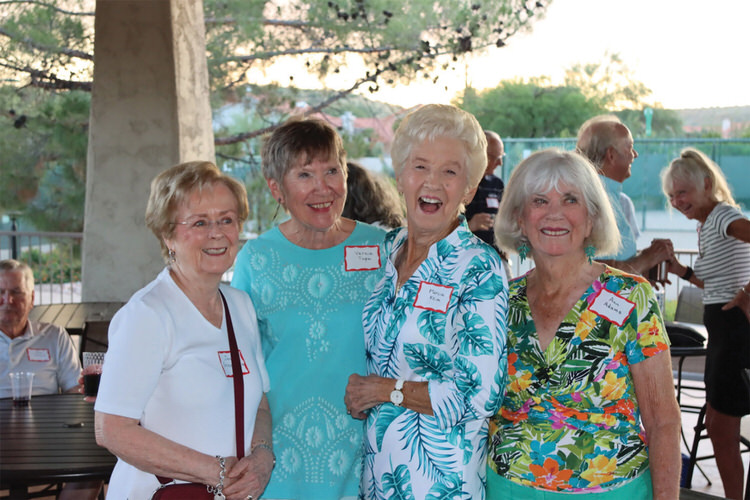 On Oct. 1 Unit Nine of SaddleBrooke One held its annual Welcome Back Party honoring all the snowbirds who have returned to their Arizona nests. More than 50 members were present at the tennis pavilion to enjoy a wide selection of hors d’oeuvres made by the attendees. It was good seeing old friends and meeting new ones, and everyone had a great sunset to enjoy as well. 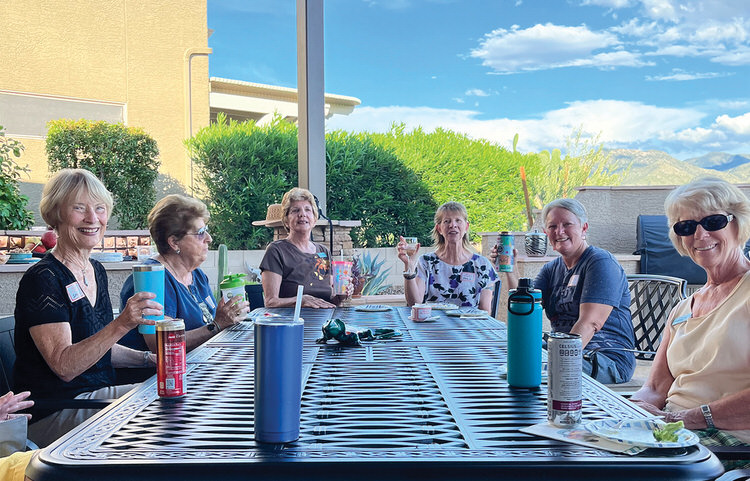 The ladies of Unit 25 gathered together for a cocktail party at the residence of Sheila Mazurek on Sept. 22. Keeping their men at bay, the ladies had the opportunity to socialize together on the back porch with their beverages and some light snacks on a delightful September late afternoon! Just goes to show, it does not always have to be an “extravaganza” to get together for a good time! 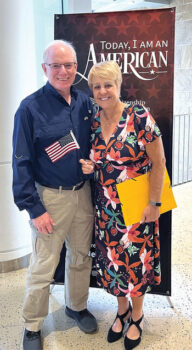 One of our Unit 27 residents recently became a U.S. citizen, and we are all thrilled for her! On Friday, Oct. 21, Suzan Carter was sworn in during a naturalization ceremony at the federal courthouse in Downtown Tucson. When she and husband Terry arrived home in SaddleBrooke, her doorway was decorated with red, white, and blue balloons in celebration.

Suzan was born in the North of Brazil to a Brazilian mother and a British father and still holds citizenship in both countries. In 2014 while on a family trip to the United Kingdom, she met her husband-to-be, Terry McCarthy. They were married in 2018 in Tucson; however, the story of her journey through the naturalization process began before they were married. She submitted lots of paperwork and documents and obtained a fiancée visa, a temporary green card, and a work permit on the way to becoming a naturalized citizen. And, of course, she had to take a test to show her knowledge of the government. It is said that naturalized citizens know more about how the government works than anyone born here. Suzan says that she has always felt very welcome in the U.S. by the many friends she has been fortunate to make. And we sure like her here in Unit 27! Congratulations, Suzan!

Another of our Unit 27 residents, Eileen Depka, is a candidate for the SaddleBrooke TWO Board of Directors. She is well known to our unit as the driving force behind the recently adopted Common Area regulations. We know that if she is elected, she will give full attention to her job, and we wish her well. It should be noted that she and husband Jeff are great party-givers and are always willing to help out whenever a neighbor needs a hand.

Phil Doyle’s Unit 27 golf Mixer-Scramble with Designated Putter events began the season on Oct. 13 with 25 participants, including two new putters, Marty Fisher and Barb Lancaster. The team of PJ Turner, Randi Roberts, Melody Branstrom, Doug Drake, and Jeff Depka had the lowest score, and Fira Stout was not only designated “Most Valuable Putter,” but made the “Shot of the Day,” by sinking a 40-foot putt, allegedly with her eyes closed!

If any other Units or Unit Reps think a mixer/scramble would be fun for their unit, they should contact Mike Karpe at the MountainView Pro Shop.

The third full week of October was indeed a full week for Unit 27, with a Dine Around arranged by Fira Stout at Churrasco de Brasil on Oct. 18, which Brazilian-Brit-American Suzan Carter and her husband Terry McCarthy attended, and a Snack and Chat hosted by PJ and Terry Turner on Oct. 22. Both events were well attended, and everyone enjoyed themselves, as well as the food. Our thanks to Fira and to PJ and Terry for hosting these fun and tasty events.

Autumn came rather abruptly this year. Time to unpack the woolies!

The first Oktoberfest was held in 1810 to honor the Bavarian Crown Prince Ludwig’s marriage to Princess Therese von Sachsen-Hildburghausen. Who knows if it was a happy marriage, but it turned out to be a great reason to enjoy beer and brats. And that’s just what 68 residents of Unit 49 did on Oct. 2 in the Ironwood Court cul-de-sac.

A few games were set up to play, and we were entertained by accordionist Vince Biase. His lovely wife Dona Ferry assisted. Our very own Bratmeister, Jeff Boettner, cooked up the beer-soaked brats, and they were good!

The weather was fine until a little squall blew in, and it rained for a few minutes, but the cooler temperature was appreciated, and we were rewarded with a beautiful rainbow over the mountains. Gathering with friends and neighbors again led many to say how lucky we are to live here in SaddleBrooke!