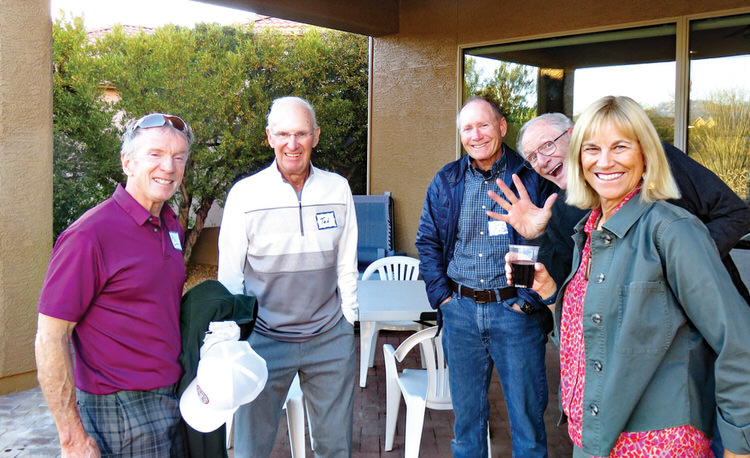 Fira Stout has organized monthly bocce games for Unit 27 residents, and various residents have taken advantage of the opportunity from time to time. On Feb. 27, Eileen and Jeff Depka and their two out-of-town guests joined Fira. The ladies played two games, and then the men played one game. Then Fira went home, and the two couples played each other. According to Eileen, the weather was perfect.

Kathy and Dan Booher, one of the couples who moved to our unit during the pandemic, hosted the Snack and Chat on Feb. 19. They have done extensive remodeling on their new home, including partially screening their large patio, which looks out over the mountains. That provided a great opportunity for guests to mingle outside as well as inside, which was a good thing because the turnout was quite large. Those guests who remained inside had the privilege of experiencing the Booher’s indoor remodeling. With a large attendance comes a large amount of food to share, and this event was no exception. The big variety of desserts was impressive and “beyond delicious,” according to one attendee.

The third monthly unit fun golf scramble organized by Phil Doyle was held on Feb. 21. Although they experienced winds that blew up to 30 mph, the hardy golfers stuck it out. A few of them drank “birdie juice” to keep warm! Obviously, the battle was not only between teams but also all players against the elements. Three teams tied for first place, beating back the wind as well as their fellow players. After that invigorating outdoor experience, everyone retreated to Karen and Don Ericksons’ house to eat, drink, and warm up.

Here’s to better days ahead!