Unit 11 has started to have fun again. After our long months of quarantine, it was time to reactivate a social committee, and eight neighbors volunteered to get things going.

On April 29, we held a street party on Cleek, with 40 neighbors enjoying food, games, and reconnecting. Then, on June 23, we held a potluck-style get together at the Activity Center. This was originally planned as an outdoor event at a home, but the heatwave called for plan B, and we definitely appreciated having such a nice, air-conditioned facility available. Twenty-eight folks made it, despite a last-minute change of date. Many of our snowbirds were missing, but we got to meet a couple who had moved in just four days prior.

There are some great ideas for future events in the works, and we intend to make this a priority for building valuable neighborhood friendships. These connections are something we no longer take for granted! 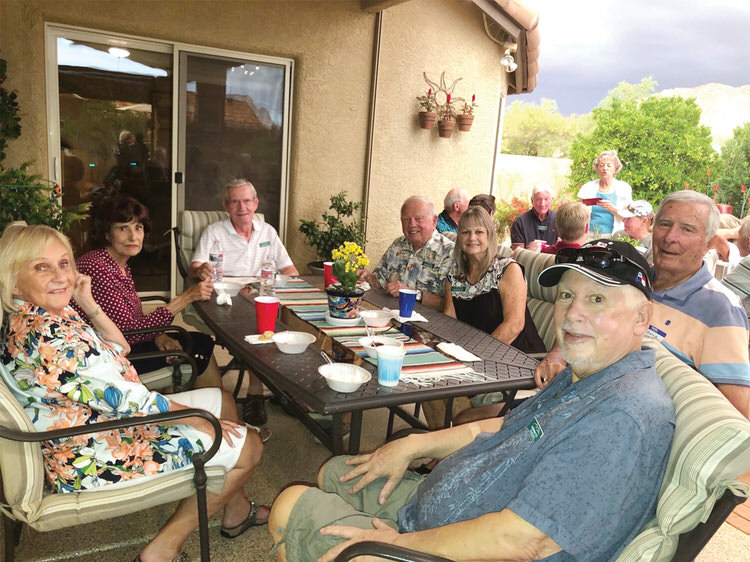 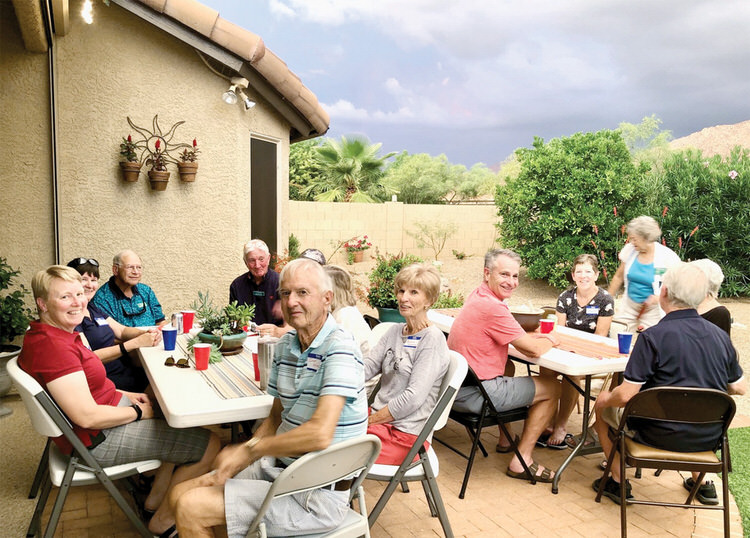 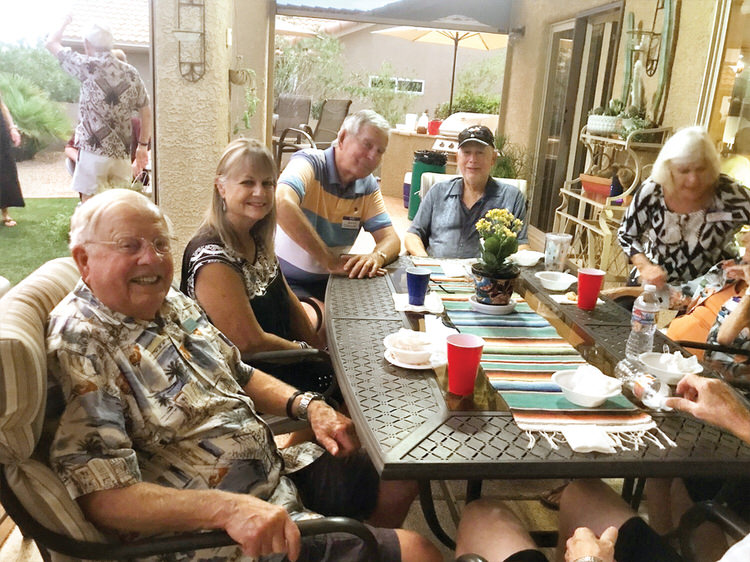 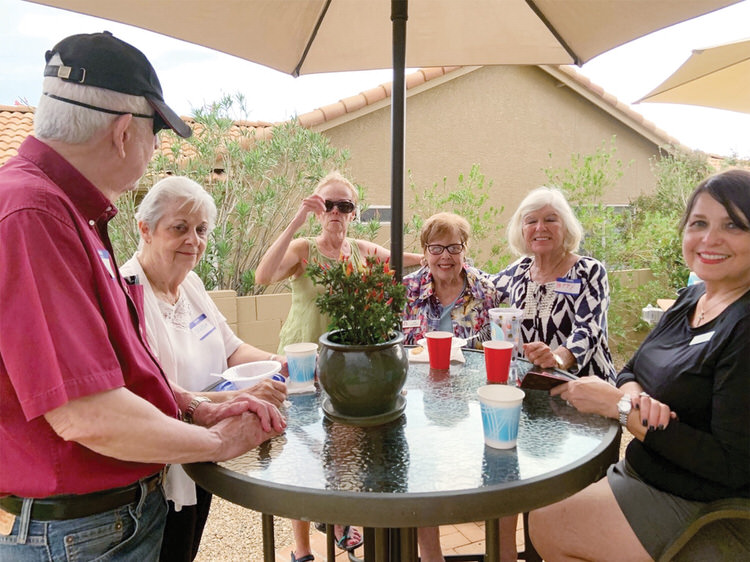 Unit 17 celebrated National Ice Cream Day with our annual Ice Cream Social, held at the home of Chris and Elissa Cochran. Old and new neighbors caught up on their lives while enjoying seven different ice creams at the unit event. In addition to a variety of ice creams, there were brownies, cookies, fresh strawberries, blueberries, bananas, a mixed fruit cobbler, and even an apple crisp. 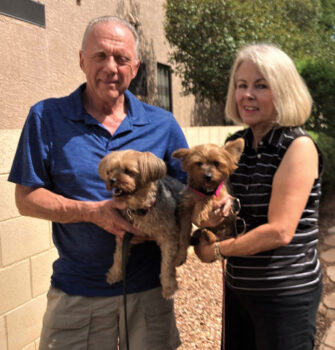 In addition to the monthly update of Unit 27 activities, we are highlighting some of our newer residents, many of whom have moved to our neighborhood during the pandemic shut down and have not had a chance to meet their fellow residents. This month, we feature Shirley and Chris Webster, who moved to Unit 27 from Unit 32 in late August 2020.

People have many reasons for moving to a new home, but Shirley and Chris had a somewhat unique reason; they wanted to find a more suitable location for their ping pong table! Always active, they had been avid golfers for many years, even taking golf vacations, including to Hong Kong and Mexico. Golf is what initially attracted them to SaddleBrooke, but things changed, and they started playing less and less golf and more and more pickleball and ping pong. So now, they take pickleball vacations!

Shirley and Chris were high school sweethearts in Centralia, Wash. After high school, Chris attended the junior college across the street from the high school, obtaining a surveyor degree. He served in the Army National Guard, after which he and Shirley moved to Montana. He intended to attend engineering school on the GI Bill but changed his focus to accounting and finance, and he instead studied to become a CPA. They then moved to Buhl, Idaho, near Twin Falls, and to Reno, Nev. before coming to SaddleBrooke. Luckily, Shirley’s job as a cosmetologist, and later a massage therapist, has allowed her to move relatively easily.

In addition to pickleball and ping pong, Shirley and Chris walk their two dogs, Kotzi, a large Yorkshire Terrier, and Luna, a small Yorkie. Kotzi, which is a German nickname for Katherine, was named after a friend and former neighbor. Luna is a recent rescue and is fitting into the family quite well.

A well-deserved shout-out to Shirley and Chris and all the other SaddleBrooke residents who have given homes to otherwise unwanted pets.

Welcome to Unit 27, Shirley and Chris!

The first official Snack and Chat in over a year was hosted by Unit 27’s unit rep, Jeff Depka, and his wife, Eileen, on July 24. Aided by a benevolent Mother Nature, the event was a smashing success. Southern Arizona has been the grateful recipient of lush monsoon rains, which everyone has appreciated. Of course, the falling rain does tend to put a damper on outdoor activities. However, as luck would have it, the rain stopped for the entire two hours of the Depkas’ Snack and Chat, which allowed for those attending to congregate either inside or out, therefore alleviating congestion in the house.

In lieu of actually taking a count of the large attendance, one needed only to look at the food people brought to share. Honestly, there was food all over the place! Certainly, no one went away hungry. Because of the many new residents who have moved into Unit 27 during the shutdown, the social chair, Ron Talbot, put out an email prior to the Snack and Chat, reminding everyone that attendees should bring food to share, as well as their own drinks. He made a point of saying the food could be appetizers or any other type of savory or sweet dish, and there were plenty of both. In fact, the food seemed to be one of the big subjects of conversation, along with the rain, of course. And sports… always.

This successful Snack and Chat is just the first of what will, hopefully, be a year full of opportunities for neighbors to come together. Fira Stout is planning Dine Arounds; Jan Talbot is setting up the Not-So-Gourmet potluck events; Vicki Strief has already told the unit ladies to hold Saturday, Dec. 4, for the Ladies’ Holiday Party; and the Talbots have set Thursday, Dec. 9 for the Unit Holiday Party. Additionally, the monthly unit meetings, likely with dinner to follow, will start up again in the fall.

The monsoon rains held off for what became a perfect, late afternoon happy hour with Unit 48 at The Preserve on July 21. While warm and somewhat humid, the misters and fans made it a very comfortable evening. The appetizers were wonderful and so was the company, not to mention the views! The service was impeccable as always, which is not easy with a group of 40 or so. There was lots of talk about upcoming travel plans or travel that had already taken place during the summer. Post COVID travel is the best travel, and everyone still seems to be taking proper precautions. What a lovely way to spend a nice summer evening. Life is great in 48!