March was a month of changing weather patterns. For example, snow, followed a few days later by temperatures in the high 70s. And of course, the ever-present pandemic continues to challenge both our physical and mental well-being. However, Unit 27 residents are resilient and flexible, and they have found ways to move around and have fun, no matter the obstacles.

New-ish residents Randi and Tod Roberts ventured out on their first visit to Tubac to play golf and walk around the town, also enjoying good wine and food. They report that cattle still roam the Tubac golf course. Although the weather was not great during their visit to Tubac, they enjoyed themselves, and they are looking forward to more adventures around the Grand Canyon state.

Also touring southern Arizona were Sandy and Phil Barney, who drove to Wilcox to see the migrating sandhill cranes.

“There were a lot of them, they are very large, noisy, and beautiful to see,” Phil reported.

They then drove about 30 miles to the Chiricahua National Monument, with its unique vertical rock formations. They did not make it to the nearby Fort Bowie, but suggest that others might consider a visit now that the cranes have left for the season.

Barb Lancaster retired from the SaddleBrooke TWO Fitness Department on March 11. She is looking forward to some well-deserved R&R. Barb and her husband Dave plan to travel and spend more time with family in Missouri. She is also anxious to participate in some groups that she has been eying here in SaddleBrooke now that she has more time. Congratulations, Barb!

Jim Fetrow reports that after 10 years and 70,000 miles he and Peggy have sold their motor home. During the past 10 summers they have traveled to both coasts several times, as well as many places in between, including U.S. and Canadian parks. He and Peggy will not stop traveling but will do so by more conventional means. They also gave a shout-out to the resident volunteers and to Desert Life Pharmacy for the successful COVID-19 vaccine program. Hopefully, with most residents vaccinated, we will soon have more travel to report.

While some Unit 27 residents traveled, most have stayed home during the past few months. Ron and Linda Bouchard have been growing lettuce, peas, arugula, and other cool weather produce, as well as lemons—lots of them! With gardening and continued sports activities, Ron says they will soon be in great shape!

On March 1, ten Unit 27 volunteers surveyed the unit for the SaddleBrooke TWO Unit Beautification Program. They identified areas in need of trimming, weeding, and other such maintenance work. All noted items that needed work were mapped, described, and submitted to the Common Area crew. The volunteers are hoping that their efforts will be rewarded by a cleaner and more appealing common area. Those volunteering were Fira Stout, Jan Talbot, Carole and Fred Drango, Bonnie Barker, Vicki Strief, Jane Zielske, and Jeff and Eileen Depka. Thanks for your efforts, neighbors!

In addition to volunteering, Eileen Depka has been honing her artistic talents. Her latest project has been learning to use a cricut maker, which is not a device to make crickets. It is very versatile for making a variety of projects with cardstock, wood, fabric, vinyl, and more. Eileen says it helps keep the creative side of her brain happy.

Two of our most recent residents, PJ and Terry Turner, are getting to know other Unit 27 residents while walking their pug, Martini Vermouth. They are also getting to know much of the resident wildlife, including coyotes, deer, and a “cheeky” bobcat. Now that the boxes are mostly unpacked, they are also playing golf and love the beautiful courses. PJ reports that their daughter, who initially questioned their move, recently visited from South Dakota, and is now “in love with SaddleBrooke!” They look forward to more social gatherings in the unit, as well as outings in the Tucson area.

Jaci Nissen volunteers with the Senior Village of SaddleBrooke as an “intake interviewer,” meeting with residents to explain what SaddleBrooke Senior Village has to offer, and to help them complete required forms. She also assists with mailings, schedules COVID-19 vaccine appointments, and is hoping to assist in the “Moving On” program. In addition to her work as a volunteer, Jaci also continues with what she modestly describes as her “self-taught efforts to become a ‘satisfactory’ watercolorist.” She continues to play golf, and is thankful that the courses have remained open.

Chuck Aurand, who has the longest continuous residency in Unit 27, recently announced that he will be moving. However, his daughter, Cheryl, and her husband, Kurt, will be buying Chuck’s house. Although we are sad to see Chuck leave, we welcome Cheryl and Kurt.

Fira Stout organized another Bocce Ball outing for the unit, on March 18. According to Fira, the weather was perfect. Six people played, including Chuck and his daughter, Cheryl. Fira says that Doug Drake has learned how to play so well that the group now insists he use his left hand to play. She says if he gets any better, they will put a blindfold on him. Now that’s talent!

Whether traveling or staying at home, our residents enjoy themselves. 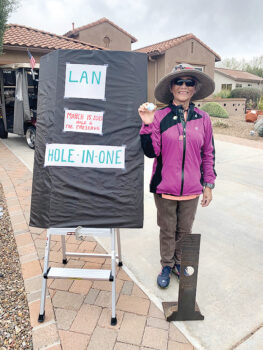 For all of you long-suffering golfers who have played for most of your life, you won’t like this story. Lan N. Bedard only started playing golf in 2001. She didn’t start playing regularly until she moved to SaddleBrooke in 2009. Her husband, Roger, has been playing since he was a kid. Yet you can bet the golf gods were laughing when it was Lan who got the family’s first hole-in-one.

On March 15 on hole number 6 at the Preserve, Lan took out her 5-wood, knocked it 100 yards and in one bounce it shot right into the hole! For a hole notorious for being generous for bounces off the side hill, Lan decided she would not take the easy route and instead hit it straight into the red flag.

Playing partners Mike Bershaw and Don Butcher watched as it landed, but their fourth, Bob Maruniak, had so much faith that he had his binoculars trained on the cup as he saw it fly in. Now that’s confidence.

Her Unit 49 neighbors let her know how proud they were as word got out before she even got home. She was greeted with a big welcome by her husband and friends, complete with signs and awards as she pulled into her driveway. Everyone then retired to her backyard to celebrate her ace with the appropriate beverage of choice … wine for everyone. Congratulations, Lan! Now hurry up and join the fun, Roger.