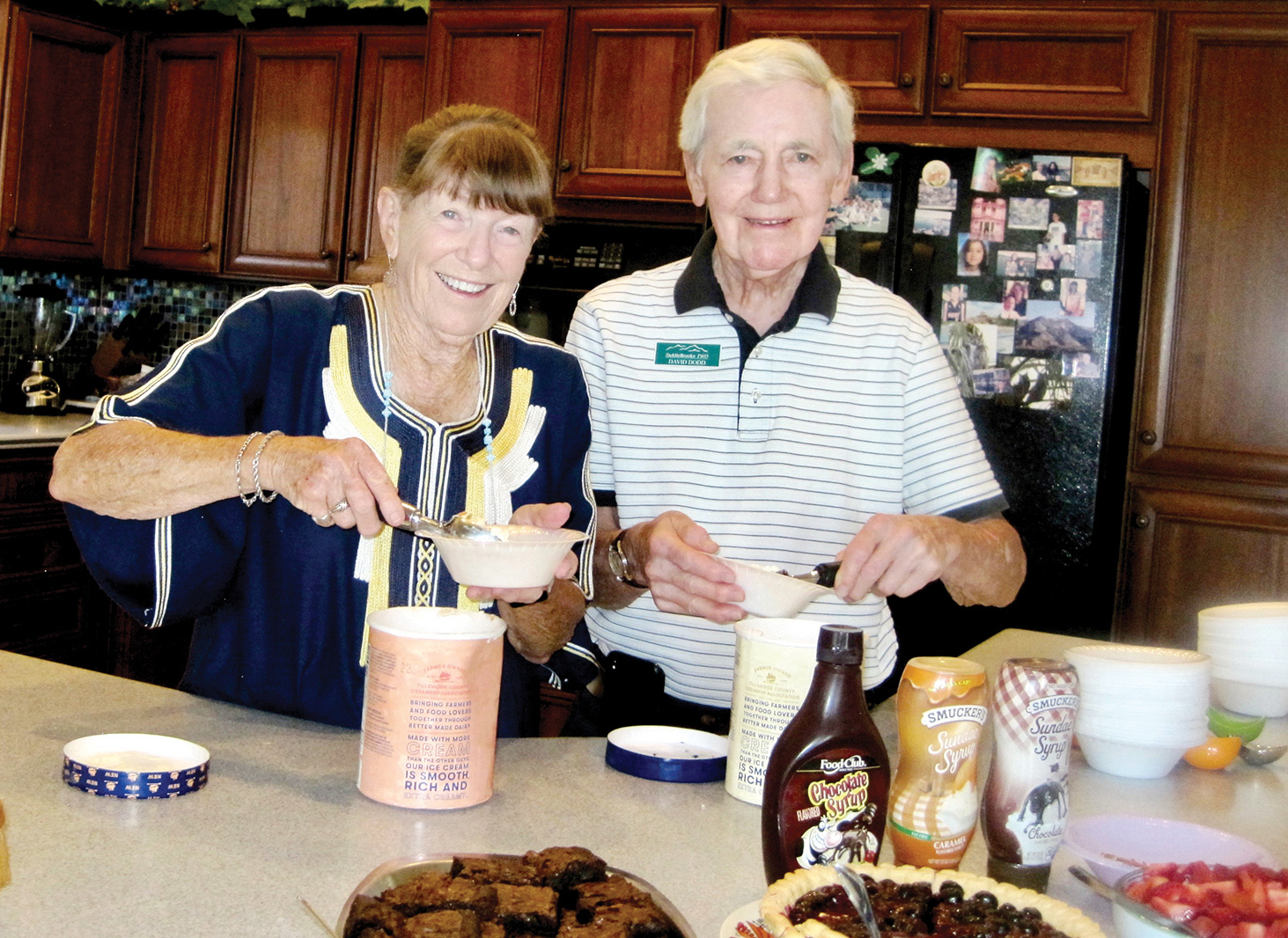 Arlene DesJardins and David Dodd served up many dishes of ice cream at Arlene’s home on July 26. Arlene had a great selection of goodies to make the ice cream quite enticing. This was our unit’s first chance to try having a gathering during the virus precautions. Hopefully we will be able do this again.

And it was great to welcome new owners to the unit. Joan Chasanov just moved here from Indiana. Cindy and Mike D’Angelo have moved here from Washington State. They had a good chance to talk with seasoned owners who can tell “what works and what doesn’t work.”

We are still planning events in the hopes that this virus will disappear soon!

September 4: Life is an End to a Long Hot Summer

October 27: Life is a Spooky Halloween (at the Activity Center)

December 6: Life is a Holiday Celebration 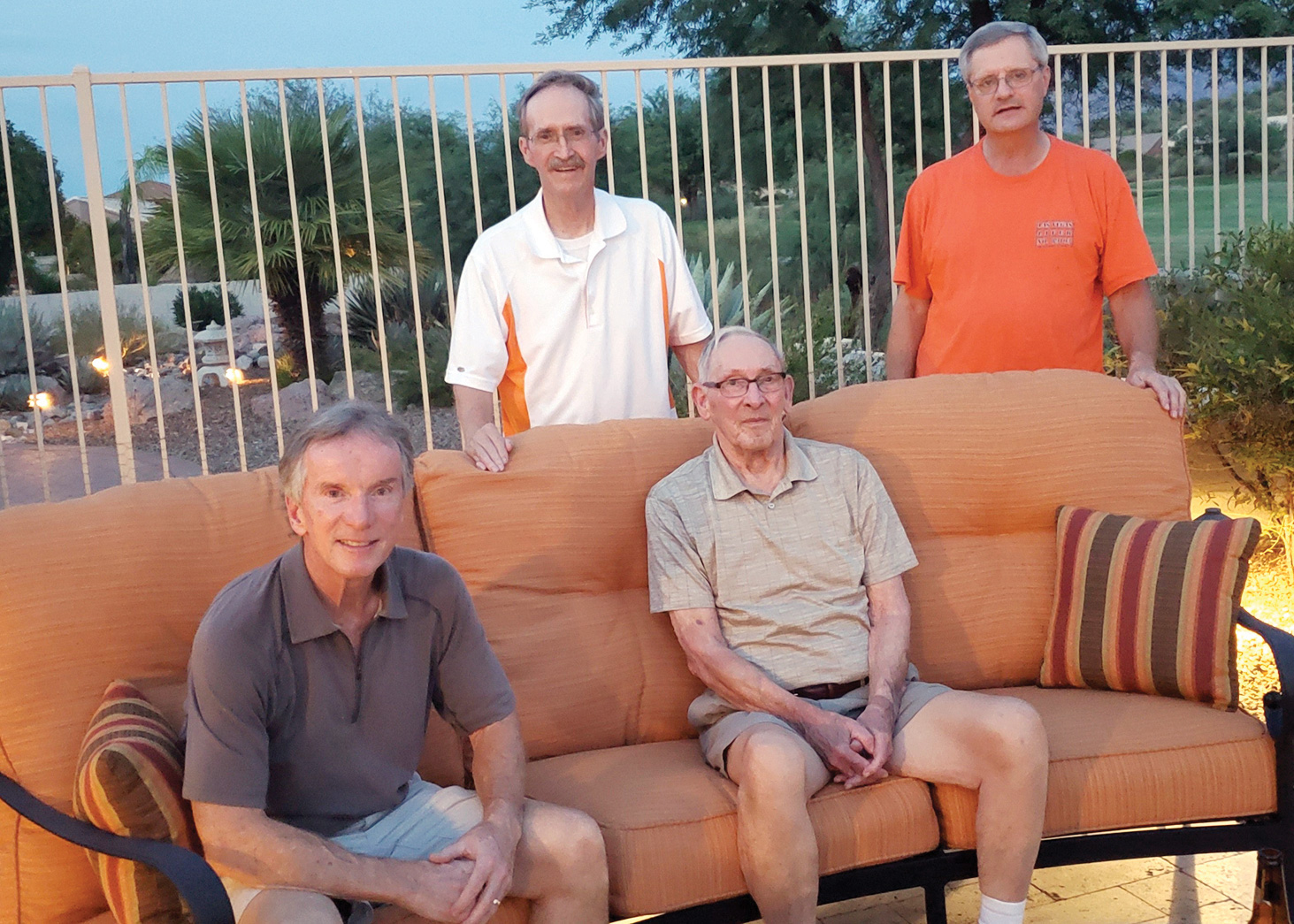 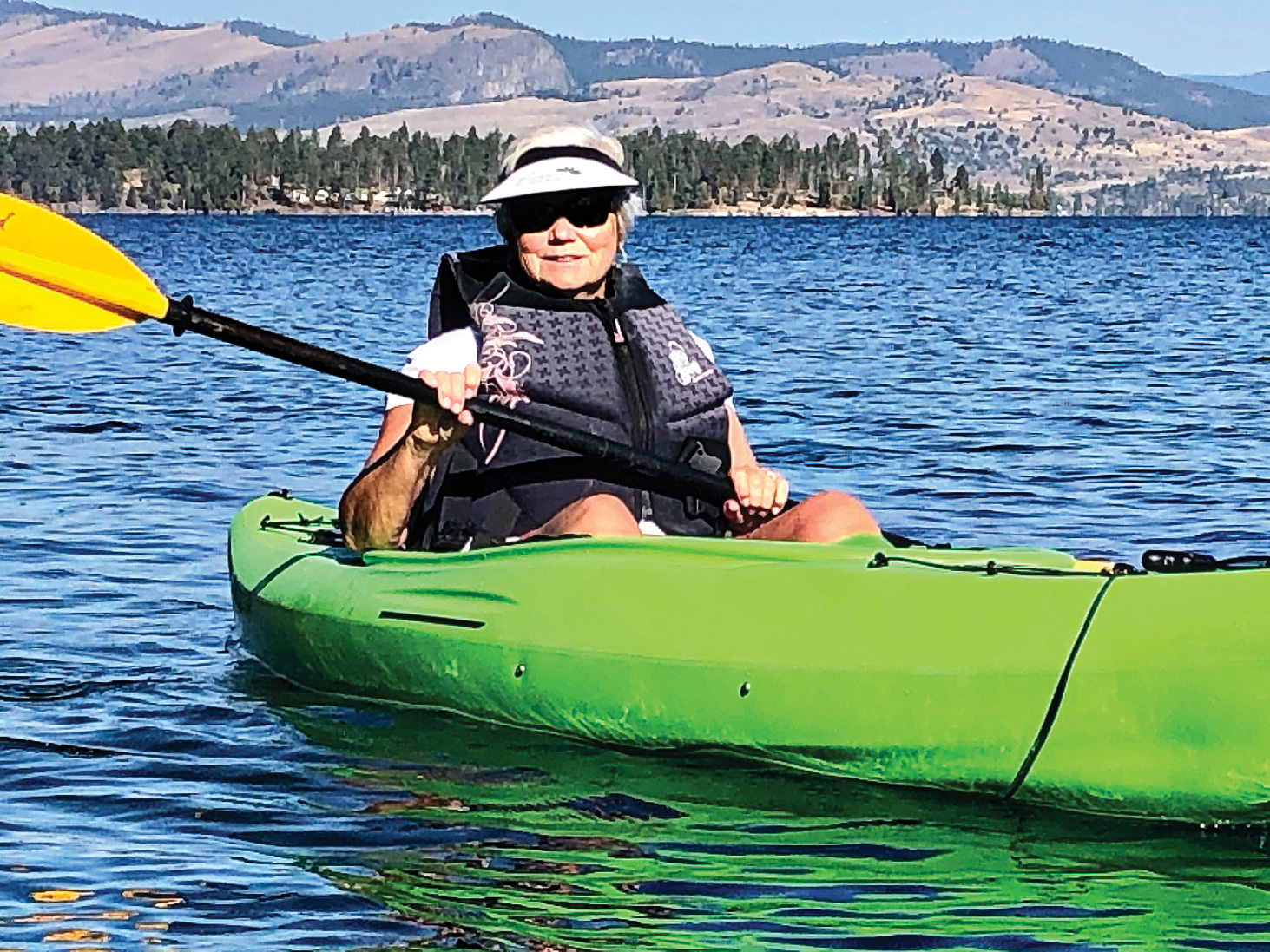 In early August, Unit Representative Jeff Depka announced that Frank Newburn had retired as the Deputy Unit Rep., after 12 years of service to the unit, and that Phil Doyle had agreed to take Frank’s place. The unit took up a collection; and Jeff, Phil, and Social Chair Ron Talbot presented a $300 cash donation to Frank, along with several six-packs of beer from around the world, plus two fancy clothes hangers, handmade by Fira Stout. Frank was very appreciative of the generosity of the Unit 27 residents.

Speaking of Fira, she related a story of her American Airlines flight from Detroit back to Tucson. She apparently had her obligatory mask over one ear, but forgot to put it on as she boarded. Accordingly, she was berated for her inadvertence. In addition to a human scolding, a red warning sign appeared on the monitor! She was warned, as we have read about in news clips, that unless she kept her mask on other than while eating and drinking, she would be permanently banned from flying American Airlines. Luckily for her, she was flying first class, and immediately ordered a glass of wine. Every time a flight attendant came by, she raised her wine glass. I’m glad I’m not a flight attendant!

Back in the unit, Carol and Richard Merlini have created a mini bird sanctuary in their backyard. From the comfort of home, they have had the privilege of seeing, and feeding, the likes of Abert’s towhees, white crowned sparrows, and Gila woodpeckers, as well as finches, doves, and quail. And also a Cooper’s hawk that tries to find a quail dinner. They have enjoyed watching 4-5 quail families grow up. Carol relates that if she watches long enough, she can distinguish various birds by their unique personalities. Unfortunately, nurturing beautiful birds comes with a price. A Broad-billed hummingbird hatched her chicks in a nest on top of a hanging wind chime, and nurtured them for a month. Sadly, however, they were all taken away by a roadrunner. It’s definitely a jungle out there! But Carol is quick to say that she enjoys waking up in the early morning to the hooting of the pair of Great Horned owls that have come into our unit.

In an entirely different endeavor, Phil Barney developed a rather one-sided voter quiz to “help” folks decide how to vote this year. As a public service, and to keep peace in the unit, I have chosen not to publish it. However, I am glad to know that Phil is keeping busy.

Phil’s wife, Sandy, is enjoying a more Zen-like existence, by kayaking on Flathead Lake in Montana, where they are spending the summer.

Jeannie and Jack Hepner created a Nana and Gramps camp for their grandkids that live in Tucson, to take the place of the kids’ canceled summer camps. Each child spent a week on their own with Nana and Gramps, after passing nurse Nana’s camp physical. They exercised each morning, followed by board game tournaments, (prescreened) Netflix movie watching, swimming, and bicycling. They had one meal on a restaurant patio as well as home-cooked meals of their choice, and a haircut, followed by a drive through Starbucks drink. They also did some “safe” shopping for school supplies, in hopes that school would eventually happen. It’s hard to say whether the guests or the hosts missed camp the most when it ended, as it was fun for all.

Shirley and David Neimeier celebrated their 58th wedding anniversary over the weekend of August 8 and were thrilled that their daughter was able to visit on her way from California to Houston. In fact, the guest made dinner for the happy couple! She will return on her way back to California; and Shirley is looking forward to another dinner made by her daughter.

Jim and Peggy Fetrow usually spend the summer driving around the country in their RV. This summer, however, due to the COVID-19 breakout, they drove the RV to Flagstaff, where they have been staying in a 55+ RV park. Jim reports that they have been able to read and listen to audio books, hike, and otherwise commune with nature. Jim calls it one of the best summers ever.

These little vignettes have shown how adaptable and resilient we can be—and have been, during these challenging circumstances in which we have found ourselves. Be well, everyone!