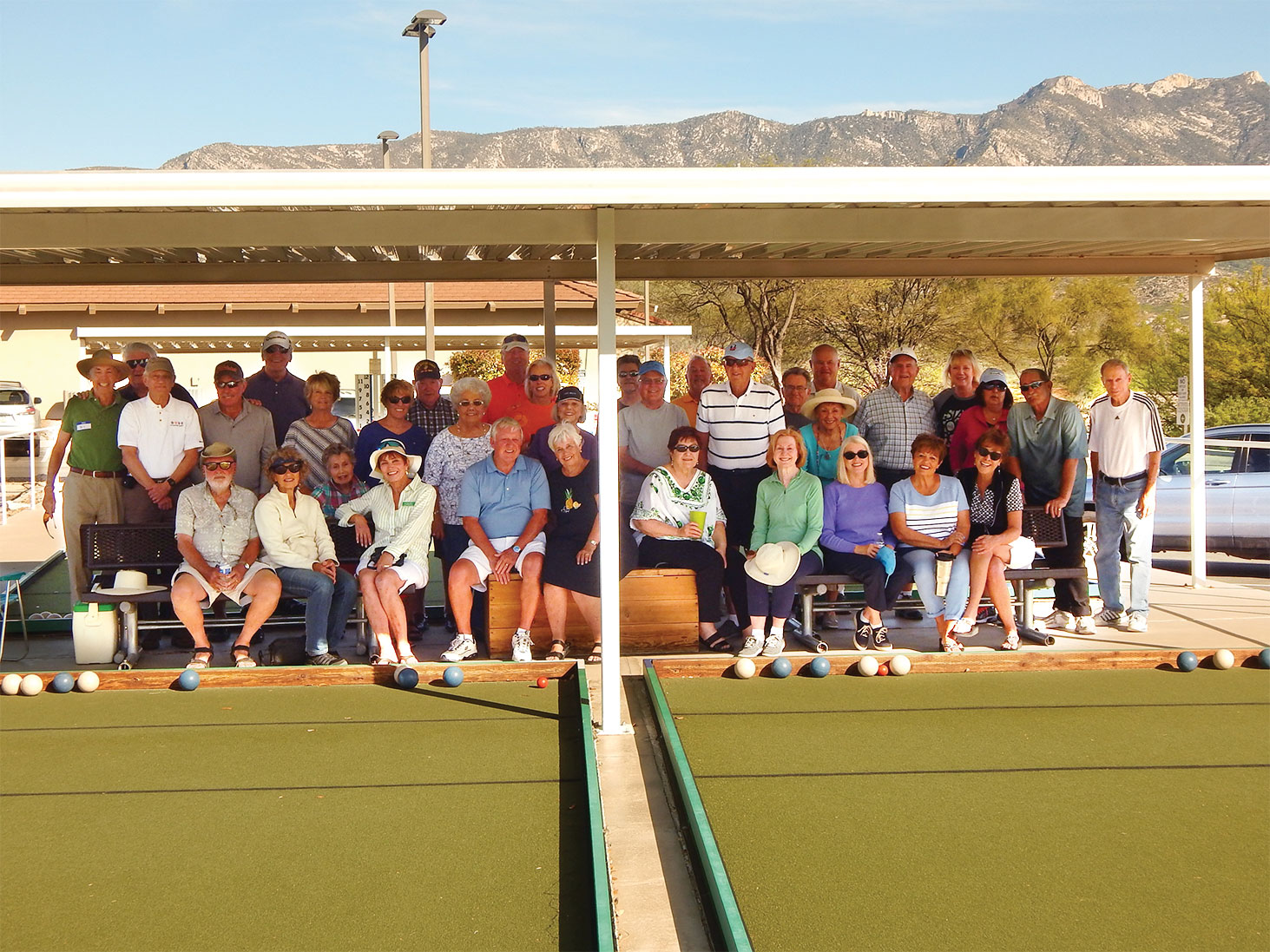 On Thursday, April 18, over 50 residents from Unit 3-S in SaddleBrooke One gathered together to learn to play bocce ball and to have a BBQ at the tennis center. Everyone had a great time playing bocce ball, meeting new residents and eating hot dogs and beans! In fact, Unit 3-S may form a bocce ball group and play on a regular schedule; spread the word! 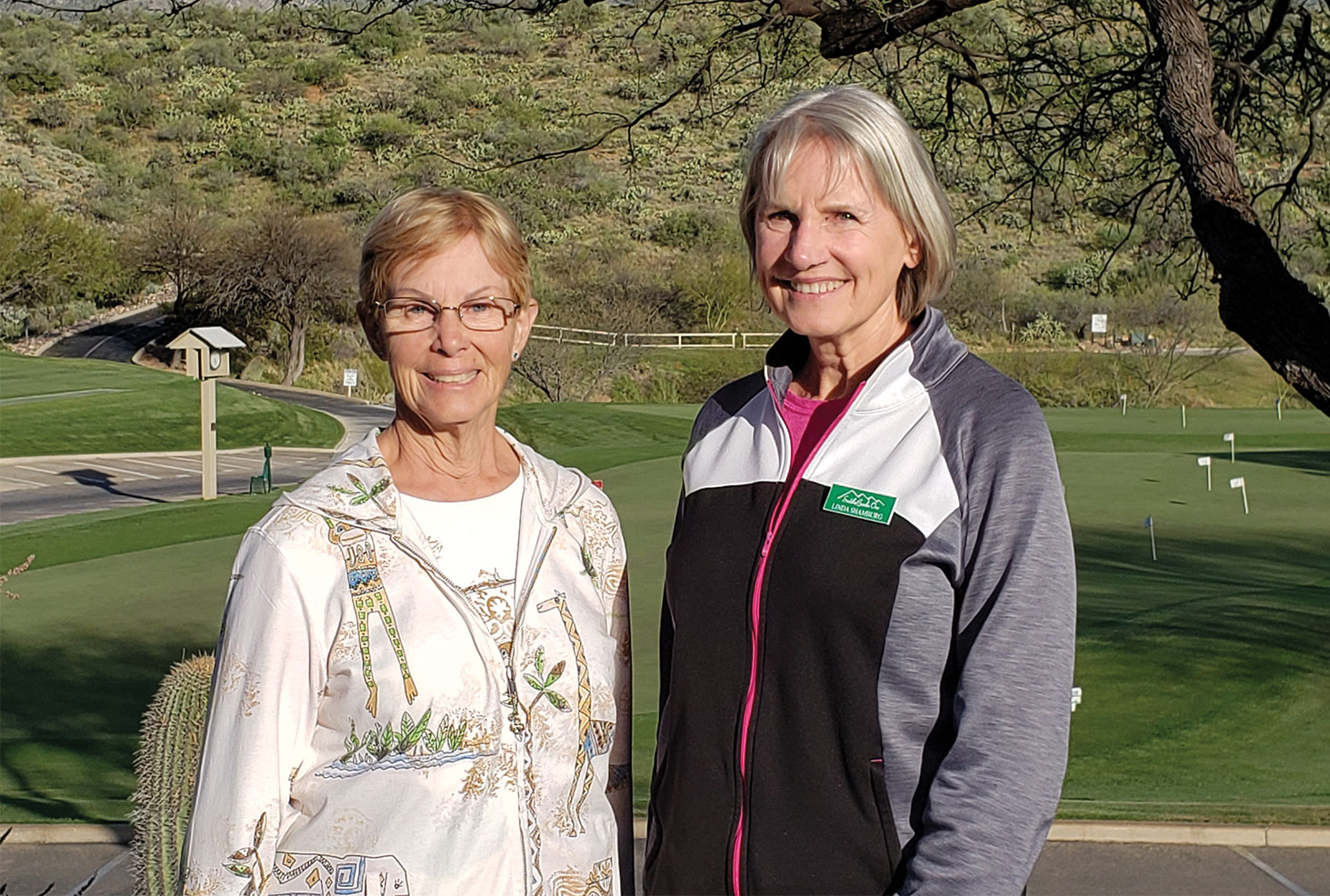 On the blustery afternoon of April 10, Unit 5 held its fifth annual putting party on the SaddleBrooke One putting green. Players battled wind gusts which redirected their putts on the course laid out by Roger Cady and Steve Overhaug. Despite the wind, 48 hearty and determined putters were put into groups for the shotgun start; no one was allowed to play with his or her spouse or significant other. To be fair for all participants, regular golfers were grouped with duffers and residents who never play golf. The groups played 9-holes of “Best Ball” and 9-holes of “Alternate Shot.” First, second and third cash prizes were given to the groups with the lowest scores. First place with a score of 38 for the 18-holes was won by Linda Shamburg and Pat Stead. Second place went to Sally Drennan, Jim Pierce and Marcia Weitzman. In a third-place tie broken by a coin flip, winners were Bob Tibor, Cheryl Coberly and Roger Cady. A buffet of fresh salad, plenty of pizza and liquid refreshment greeted the players in the RoadRunner when they completed their rounds. Everyone promised to return for next year’s sixth annual event, but requested calmer weather!

On February 4, we had a party at Nonna Maria’s. Pizza was, of course, the main entrée. We discussed the itinerary for the year 2019. Sounds like a good year. The unit thanked Donna and Elaine, who have been our unit chairpersons for nine years. They have worked hard to make the unit special. It is up to the rest of the unit to continue and with 62 of the residents showing up for the meeting, it will be done. Also discussed was the importance of the contributions by each of the members to the health of the unit.

Our progressive dinner was indeed a dining experience. March 9 was not a warm night so we stayed indoors for the most part except for the hardy people who ventured out into the night air. The dinner, because of the timing, was corned beef and cabbage with everything that goes with it. Everything was delicious but the hit of the evening was the meatballs in a delicious sauce at the hors d’oeuvre table. Getting together with over 40 other members of the Unit is always fun and thanks to Karen for putting it all together.

On April 20, we held a golf cart rally which meant driving around SaddleBrooke looking for items such as butterflies, horses, mining wagons, etc. that were on display in front yards of individual homes. It was a good two hours of driving before we had driven the route set out for us. It was great fun followed by a delicious Mexican dinner with tacos and enchiladas. Thanks to Duane and Dian Kupper for setting the route and thanks to Mel and Laura Ingold for hosting the after-rally party.

We welcome Wendy O’Dell, Marilyn Fisher and Cathe Kropp as the new social chairpersons for Unit 12.

What better place is there to celebrate “America the Beautiful” than in SaddleBrooke? Over 80 of our Unit 17 members gathered at the Tennis Pavillion at 4:30 p.m. on April 14, for our annual Spring Fling. It was nice to see many new homeowners and also some long-time owners we hadn’t seen for a while. Patriotic decorations set the lively scene.

The special event this year got us moving around to all the tables. The “Where are We” Photo Contest asked homeowners to identify pictures placed on all the tables of popular American scenes and places. Winners were Gary Luster (19 photos), Pat Parkinson and niece Sue Davis (18 photos), and Jan Koshak (17 photos).

Then a wonderful chili dinner was served; there were several kinds of chili with a great variety of toppings, cornbread muffins and tossed salad. Brownie cupcakes and a variety of cookies left us pleasantly stuffed.

Be sure to watch for Bill George’s video with party pictures.

In spring, there are two events that are a given: Taxes are due and the Unit 21 Bocce Ball Tournament Championships! And so it was that on Sunday, March 31, the 2018-2019 Champions were determined by a Playoff Tournament held at the SaddleBrooke One bocce ball courts.

According to Midge Mollenkopf, Manager of the Unit’s annual bocce ball competition, there was again a great turnout for this season’s play. “Our bocce ball season runs from October through March,” Midge explained. “This year, 18 teams competed in two divisions, each team playing seven matches. The top teams from each division played in the tournament to determine the top four places. The playoffs also included a competition for last place!”

The tournament was spirited, but civil. The excitement mounted as the tournament competitors took their best shots at becoming this season’s champions. When the dust settled, Tammy and Gary Beeler took home first place. Lea and Bob Stocks locked in a second-place finish; Sandy and Steve Heinlein garnered third place. A tough competition for the cellar slot was locked in by Pam and Bob LaPine.

Following congratulatory handshakes and hugs, 36 participants and bocce ball groupies retired to the RoadRunner Grill for refreshments, a great meal and the awards ceremony. John Hanna donated a brand-new bocce ball set as a traveling trophy to be used by the Beelers to defend their championship next season. Given the camaraderie and good-natured jokes and jibes going back and forth, there will likely be a good group of players for next season’s competition!

Anne and Phil Doyle, along with Ron and Linda Bouchard, Marty and Glenn Fisher and many others, produced a fun and entertaining Block Party on Saturday, April 13. (It does take a village!) The event was held in the Terrace Park cul-de-sac; and after some uncertainty, the weather was favorable.

The festivities went to the dogs quickly. The first events featured the canine friends of Linda Rueger, Carol Shupe, Kay Erb, Bunny Gill and Phil Doyle. Beginning with the musical Leashes, which was emceed by Carol Merlini, and ending with a doggie square dance, which was called by Sue Case. The dogs, and their owners, were fun and entertaining, despite early misgivings on the part of some residents. Many thanks to Kay Erb for directing the dog events.

Joe and Lynda Dolejs once again volunteered to make and serve margaritas for all attendees, using their heavy-duty, homemade margarita maker. No doubt about it, they are always the biggest draw!

While the margaritas were being served, the games of “skill” were played. Those included a basketball shoot, using multi-colored balls thrown toward garbage bins; a Frisbee toss, trying to hit concentric chalk circles drawn in the street; and a beanbag toss to a series of holes in small pieces of wood. Obviously, there are quite a few very good sportspeople in Unit 27, as some contestants actually hit these various targets! Whether the margaritas were a factor has not been divulged. Those winning prizes included Jack Hepner, Kay Erb, Eileen Depka (twice!) and Dave Lancaster. Congratulations!

The buffet dinner was a groaning board of food. The main courses were catered by Mama’s Hawaiian BBQ; and the salads, sides and desserts were provided by the residents. Anne Doyle was ably assisted at the tables by Karen Erickson, Evelyn Schommer, Flo Weiler and others. During dinner, Ron Bouchard hosted a trivia contest, pitting individual tables against each other. The winning tables received lottery tickets, although apparently no one became an instant millionaire. However, everyone seemed to enjoy participating.

After dinner, with the ambience of Glo lights at dusk, Phil Doyle and Bunny Gill led attendees in line dancing. The evening ended with handing out prizes to the game winners.

It was a fun event; and all involved in the planning and execution are to be commended. Special mention must be made of Phil Doyle’s musical assistant, Alexa, who took requests during the event. We are looking forward to using her services more often. 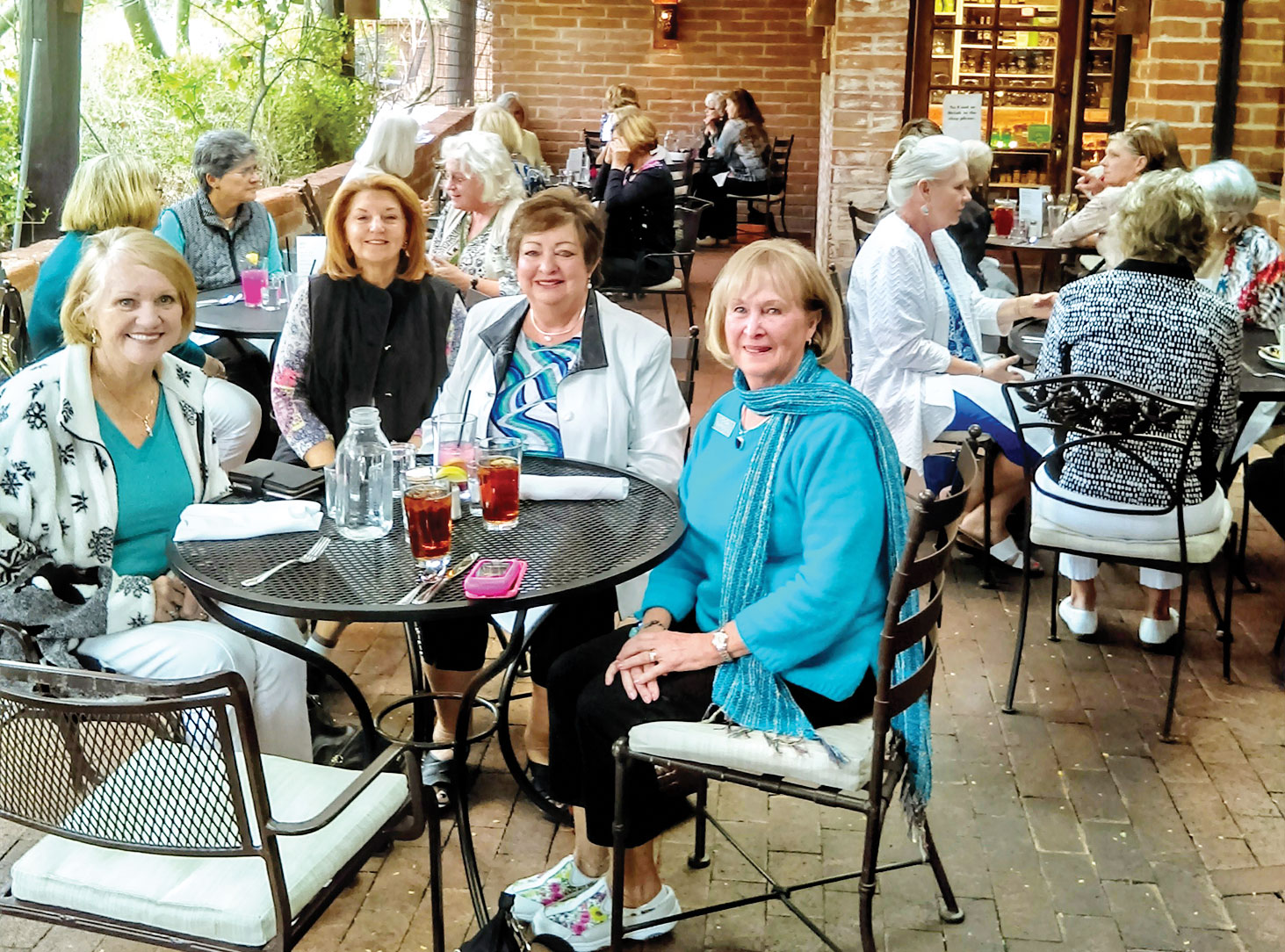 Spring was in full bloom on Friday, April 12, when 30 ladies from units 42, 43 and 45 gathered at Tohona Chul, a botanical garden, nature preserve and cultural museum located just off Ina Road. The outing began with a happy hour in the courtyard of the Garden Bistro where Black and Blue Mojitos were a favorite. After socializing and imbibing, the group headed to the patio to enjoy a delicious meal. Following lunch, the ladies walked off the calories with a private tour of the gardens arranged by the Preserve’s own Rosemary Zimmerman who is a docent at the garden.

The Ladies of The Preserve get together at least six times a year to experience interesting area restaurants, enjoy different types of cuisine and socialize. If you reside in unit 42, 43 or 45 and are not receiving the email invitations, please send your contact information to [email protected]

Get pickled and preserved

Sunday, March 31, a whole kit and kaboodle of Court Critters came out of the woodwork for The Preserve Pickle-Rama Extravaganza, followed by babble, burgers and beer at Barazani’s. The date had been scheduled three times due to weather conditions, which is extremely unusual, seein’ as how 98% of the time the weather forecast here is pickleball, with 100% chance of fun. Finally, it was just time to say, “Pickleball or bust!” As they say, three times is an alarm – so watch out – here comes The Preserve Pickleball Parade! So, without a lot of paddle-addle or ball-squall, six courts filled up and we let the games begin. The play was “Drop-In” style where players stack paddles in sets of four, and those four become court chums, making it a great way to mix it up and meet all your pickleball neighbors. We’re just a bunch of ebullient elders executing our carefully strategized retirement plan, pickleball and party, and living our motto, “Coffee – Pickleball – Beer – Repeat.” How do we do it – playday after playday after playday! After a hearty round of court cavorting, the gang moseyed homeward for a quick shower and shut-eye before heading over to the Barazani’s Beerhall and Beanery for a Grub-B-Q. Good friends, a cold thirst-quencher of choice and the warm evening sky made the barrage of burgers, potato salad, chips and brownies taste even better.

A special thanks to Gary Stevens for the idea and planning of this perfect pickleball day. Gary and his wife Peggy have been very active in The Preserve (Units 42, 43 and 45), and all of SaddleBrooke, since moving here from Del Webb in Houston two and a half years ago. They are passionate pickleball players, and, like many of the other top-rated players here, Gary generously and patiently helps others increase their skills and fully appreciate the art of pickleball. Gary has played pickleball for seven years, has a current USAPA rating of 4.62, and was the gold medal winner March 3 at the Dual in the Desert at Casa Grande, playing in the Men’s 4.0 Doubles, 65 and older. He has contributed greatly to our Pickleball Community, including his service as V.P. of SPA. Just another golden oldie worth his weight in gold.

And, a huge and long over-due medal of some sort to Fred Barazani, a man with a heart of gold, who for whatever self-induced, psychotic reason, co-dependently conspires with wife Bonnie, The Preserve’s Social Chair, in letting The Preserve Pack incessantly invade their property in the name of fun. Fred, an avid and agile pickleball player, is one cool court cat, and usually one of the first to hit the courts, often heard crowing, “court-a-doodle-doo, court-a-doodle doo” at the crack of dawn. As always, we are most grateful for our incredible life here in pickleball paradise, a gold mine of fun and friends. Now, let’s pack as many as we can fit back in the handbasket and see where we’re going next.