Sheila Tuhy, well known in Unit 3-S for her baking talent, hosted a Sunday brunch at her house on October 14. It was attended by 51 Unit 3-S residents who enjoyed the catered custom omelets and also the many breads, rolls and muffins that Sheila and her former neighbor, Mary Murphy, baked in the wee hours of Sunday morning. Torrential rain stopped just in time for the party to begin and everyone had a wonderful time. 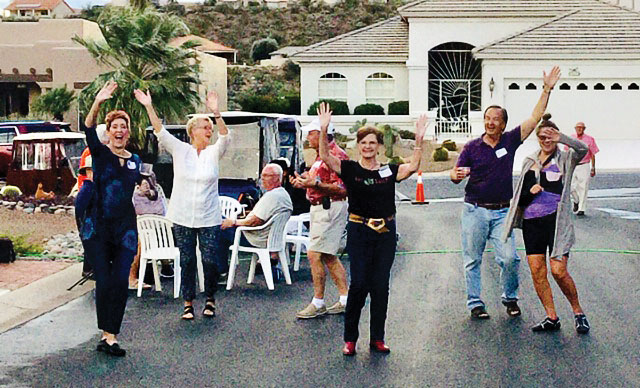 Neither thunder, lightning or sporadic raindrops could deter 62 unit 16 neighbors from dancin’ in the street to the live music of the Wild Ride band at their annual potluck, block party. Mother Nature teased for a short time with gusts of wind but the sun came out and the partying continued. Three full tables held the delicious entrees, desserts and beverages that were protected in Joyce Garcia’s garage as well as providing cover from the intermittent sprinkles. The party was a great way to welcome back our winter neighbors, introduce our new residents and kick off the upcoming holiday season. 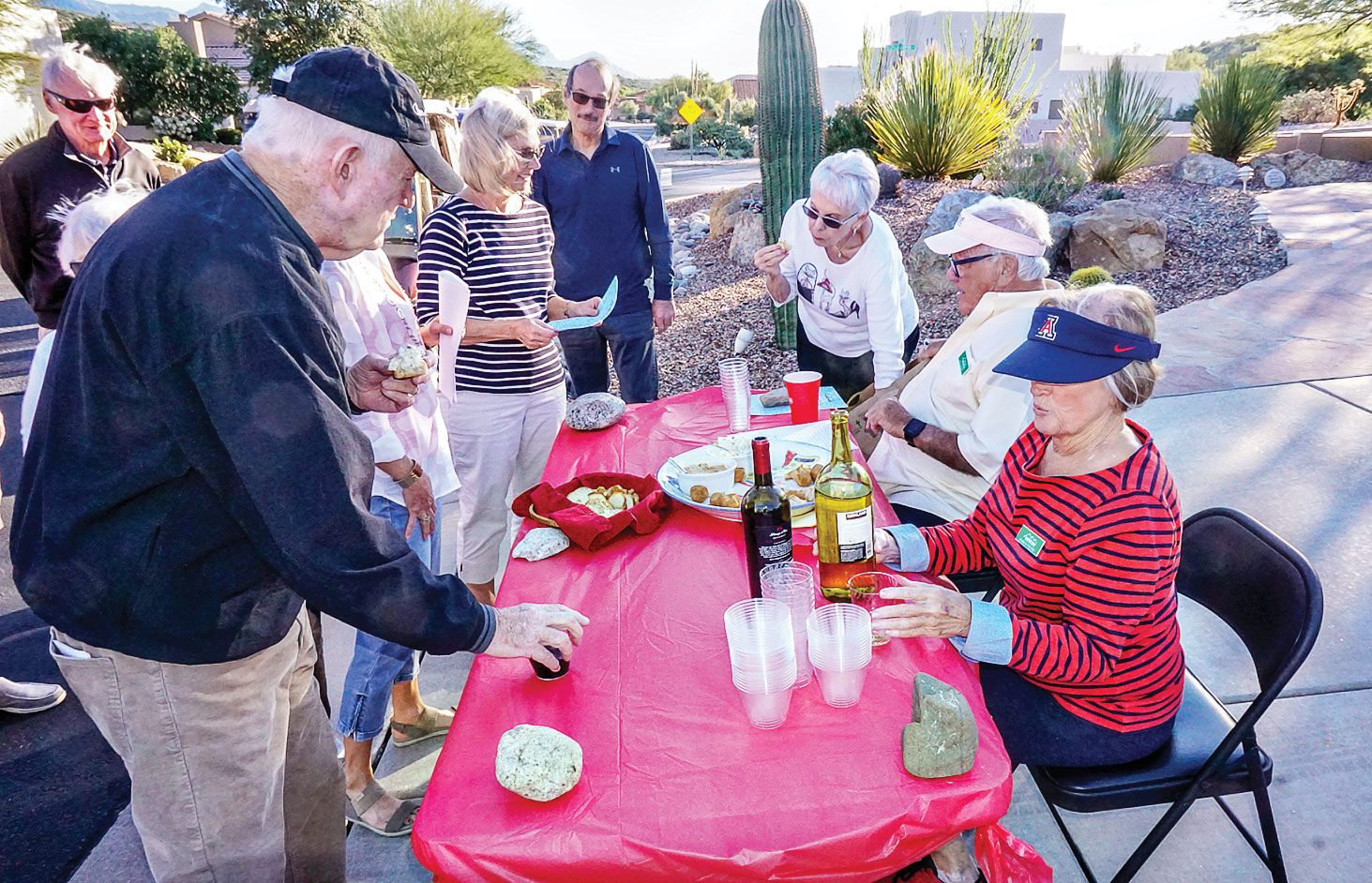 Sixty Unit 21 residents took to the streets in golf carts on a beautiful Wednesday evening in October in search of a winning poker hand. Their hopefully winning hand was made up of playing cards that were handed out at the homes of six Unit residents. As an added incentive, each stop served up tasty hors d’oeuvres and beverages! An unknowing person driving into the area would certainly have wondered what all of those golf carts were doing, buzzing around the Unit!

At each stop, the “players” were given one playing card in a sealed envelope. When all six cards were gathered, everyone headed for the RoadRunner Grill to have their envelopes opened and the best possible poker hand assembled and recorded. Then it was time for dinner!

As usual, the HOA chefs and cooks put on a great spread of smoked brisket, Kielbasa sausage and all the fixins’. Dessert was a “do-it-yourself” ice cream sundae with toppings galore. Several completed sundaes were just about overflowing their bowls.

Barbara and Dick recognized the volunteers who helped make the evening a great success. Based on the comments of those in attendance, there will very likely be another Poker Run again next year! 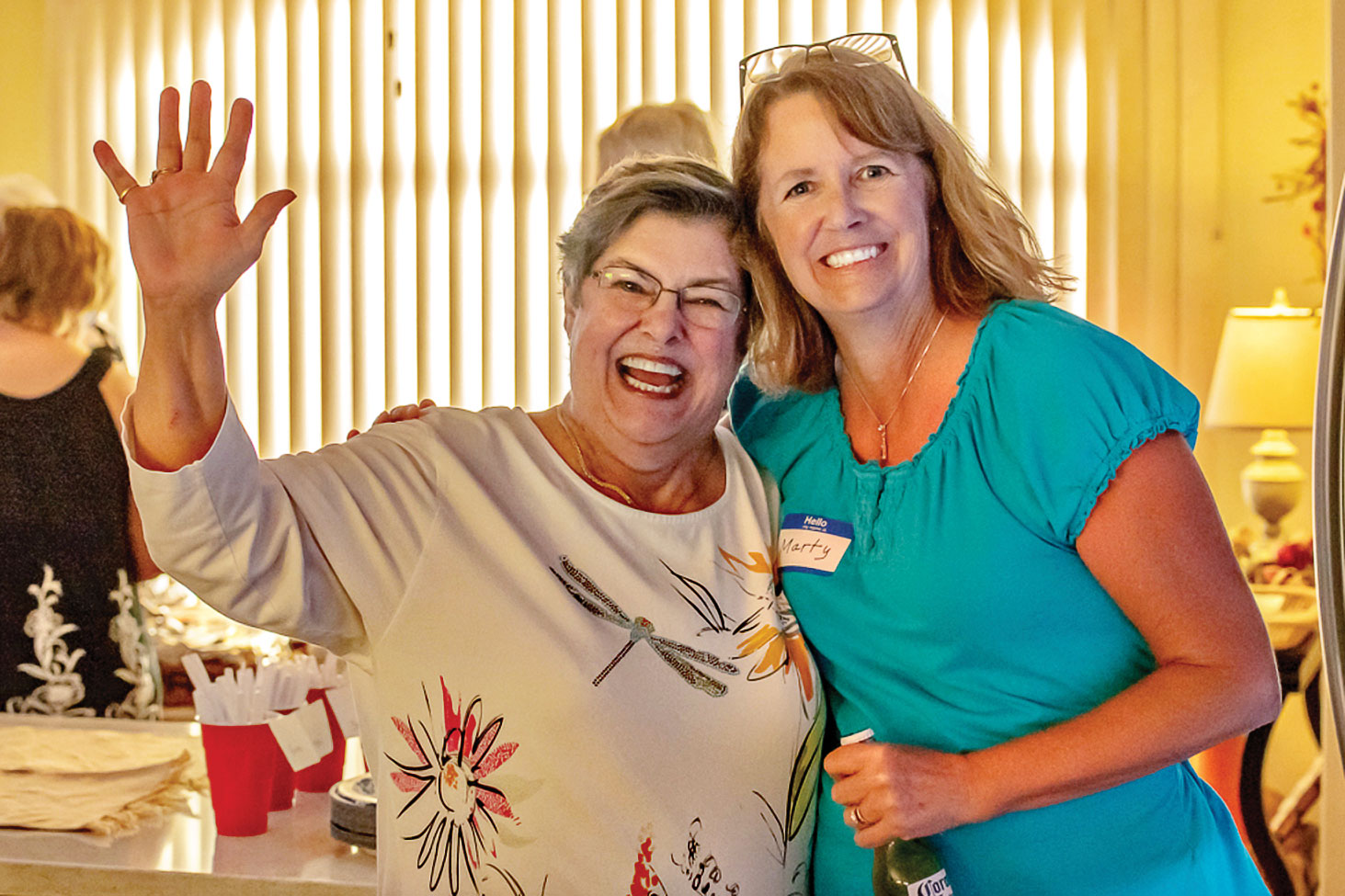 Our Unit 27 “Resident of the Month” (year?) is definitely Fira Stout. She has put her bubbly enthusiasm to work for us by organizing Dine Arounds, where unit residents can try different restaurants in the greater Tucson area. She has successfully organized Dine Arounds in September and October and has another one on the horizon, which will undoubtedly be highlighted in a future article.

On September 11 unit residents had the opportunity to try Wild Garlic, which was the venue of a Dine Around several years back. However, the restaurant has since moved from its funky First Avenue location to its current, upscale digs on Skyline Drive, across from La Encantada Shopping Center. Attendance was down, as many residents were traveling or had not yet returned from their summer digs; however, those that went were heard to say they enjoyed the food as well as the ambience.

Speaking of La Encantada, Fira organized another unit Dine Around that was held on October 9, at Firebirds Wood Fired Grill, in the La Encantada Shopping Center. It was well attended and diners enjoyed their meals as well as the opportunity to swap stories of their respective summer vacations.

Barb and Dave Lancaster hosted a unit Snack and Chat on Saturday, September 29 which was well attended, even though our usual social event photographer, Ron Talbot, was traveling. However, unit resident, Nelson Rodriguez, graciously stepped in to take pictures of the event. Considering that the month of September was terribly hot for the most part, the temperature that evening was quite tolerable, allowing attendees to spend their time outside as well as inside.

In addition to organizing yummy Dine Arounds, Fira also organizes Bocce games for the unit. This year they are on the second Thursday of each month at the Bocce courts and everyone in the unit is invited. No experience is necessary and all one needs to do is show up.

Welcome to new unit residents, Linda and Ron Bouchard, and get ready to say good-bye to long-time residents, Eileen and Len Raab, who plan to move to Florida (Florida?!?!) at the end of the year to be closer to kids.

Don’t forget the Ladies Lunch at Vivace on December 7 and the combined units Holiday Party in the Ballroom on December 11.

Never a dull moment in Unit 27! 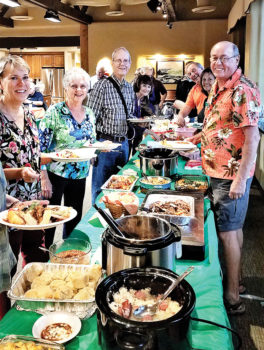 It was a dark and stormy night. No, really. It was a dark and stormy night! Saturday, October 11 was rainy, dark and downright miserable. That is until 5:30 when the Unit 48 Social Committee opened the doors of the SaddleBrooke One Activity Center to host the Unit’s Fall Harvest themed “Meet Your Neighbor” event. Magically, the rain subsided and the Activity Center was soon filled with the wonderful aromas of stew, chili, grilled pork tenderloin, sausage, sauerkraut, salads and autumn vegetable side dishes. Tabletops were decorated with pumpkin filled floral arrangements, autumn leaves and my personal favorite, candy corn and candy pumpkins. (Embarrassingly, I must apologize to my table-mates for thinking those were all mine.) As usual, the desserts were over the top: pumpkin caramel cheesecake, pumpkin bars, brownies. No one ever goes away hungry at Unit 48 food get-togethers. New Unit neighbors, Dwayne and Ann Jobst and Cathy and Jay Holberg, were introduced to the group and it was great to see a few of our snowbirds back.

Thank you to our hard-working and dedicated Social Committee for hosting this event. Their efforts make living in Unit 48 so much fun and rewarding. They can use some help, though, and would welcome new members. So, if you are a member of Unit 48, have a few hours a month to volunteer and would like to join this fun and creative group, contact Karen Brooks, the Social Committee Chairperson, at [email protected] The Committee has a lot of fun and works on events in teams so no one is ever left on their own. 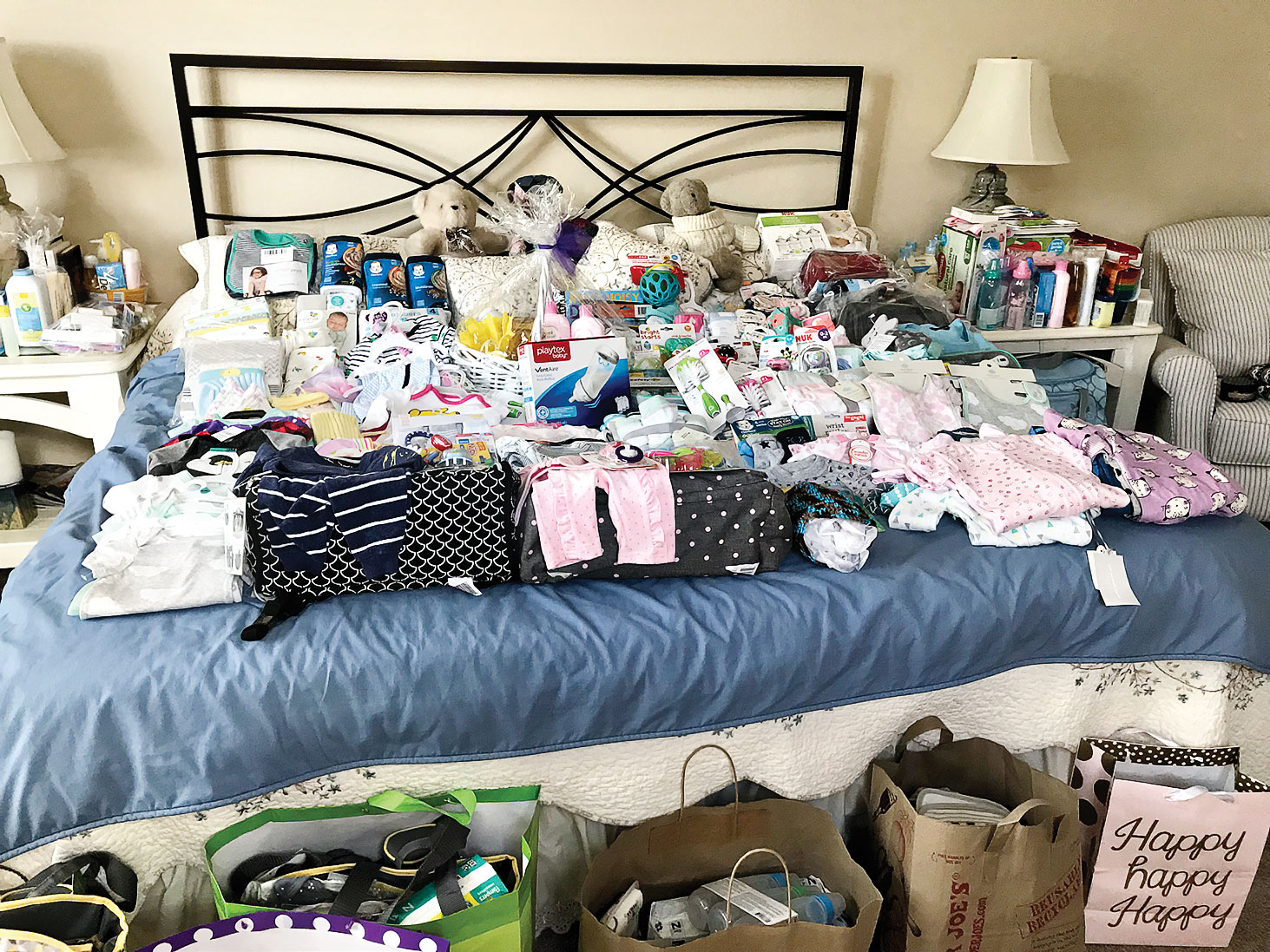 Who doesn’t like a baby shower? Approximately two dozen Unit 49 ladies gathered on Monday, October 8 for a light luncheon and shower to benefit the Tucson Troop Support’s Layette program.

Beth Bradford is the Layette Chair and she co-ordinates the distribution of the gifts. Each potential recipient is vetted for need and baskets are filled with a myriad of supplies, needed clothing and baby items.

If you would like further information about the Troop Support group or if you would like to make a contribution or join our group, please see our webpage at Saddlebrooketroopsupport.org.