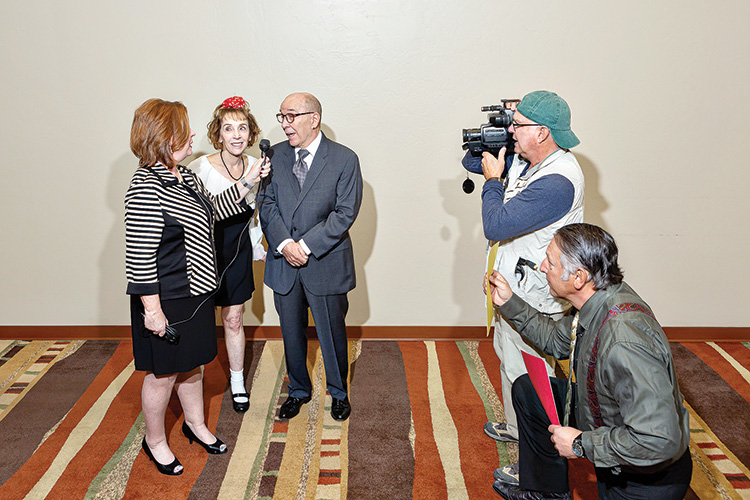 Don’t miss out on a great night of entertainment! Tickets for Community Circle Players’ dinner theatre show The Outsider, debuting next month, are going quickly. The play is a timely and hilarious political satire that skewers politics and celebrates democracy.

According to director Tim Morsani, SaddleBrooke’s performances of Paul Slade Smith’s script, which is produced by special arrangement with Playscripts, Inc. “may be the only place on Earth where you can watch non-partisan political comedy. Will Rogers, who spent most of his career lampooning politicians, could have written this play. There also are hints of Saturday Night Live.”

The cast has been busy rehearsing this well-written and very funny play since the beginning of the year. Some had to take on new roles after one actor had to drop out due to a family emergency.

Also continuing in his role as a political consultant/operative is David Fuller, who relocated from central Oregon in June 2014 and has been in the SaddleBrooke productions of Calendar Girls, The Mafioso Murders, and Eat, Drink, and Be Deadly! Previously a dentist in private practice, he has had experience in stage, film, improv comedy, and music. In early 2019, he co-wrote and starred in a short film titled These Friends of Ours.

Moving into new roles are Fran Berman as Louise, a Kelly Girl; Pete Frank as A.C., a cameraman; Monica Gustafson, as Paige, a pollster; and Patty Gregory-Burke as Rachel, a TV reporter.

Patty was in CCP’s The Mafioso Murders and Eat, Drink, and Be Deadly. Patty danced in high school musicals, studied and taught dance until her early 20s, and had a 17-year career at the Rochester NY Police Department where she met her husband and found her calling as a 911 Police/Fire Dispatcher and Supervisor and then as a Dispatcher/Supervisor for the Carlsbad PD in California.

CCP shows often sell out quickly. “If you haven’t tried SaddleBrooke dinner theatre, you’re missing a great chance to dine and laugh with your friends,” said Fred Lowy, the producer of The Outsider. “Get some neighbors together and buy a table. You can’t find a better entertainment value anywhere!”