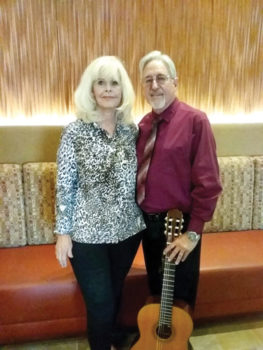 It is rather amazing the breadth and scope of the experiences people have had who come to live in SaddleBrooke.

A while ago, I met Linda Dighton through the Sonoran Singers, a group to which we both belong. Linda and her husband, Randall, moved to SaddleBrooke from Paradise, CA, three months ago.

Linda was born in California and obtained her B.S. degree from California State University Sacramento. She worked as a claims representative for the Social Security Administration before retiring and moving to Paradise. Randall was also raised in California. He attended Chapman College, where he was a math and music major. He sang throughout Europe with the college’s madrigal singers. His career included being a label designer/calligrapher for Gallo Winery, as well as a professional musician. In addition, he worked for Disney at EPCOT Center as a British troubadour. For the most part, music has been a large part of their respective lives.

The Dightons did not intend to leave Paradise—but Paradise, in a way, left them. Linda shared with me how she and her husband lost everything in the infamous Camp Fire, named after Camp Creek Road where the fire originated, in Nov. 2018. It was a tragic event that changed the lives of Linda, her husband, and thousands of others who lived in Paradise and the surrounding area. I thought, “How could anyone survive emotionally and physically from such a horrific tragedy?” Then, I found my voice.

“Linda, how did you and your husband survive? How did you come through it all?” I asked.

Linda said, “You just do,” and proceeded to detail the day when life in Paradise receded into oblivion.

Few on “the ridge” were given instructions to evacuate, when the intense fire was making its way up the canyon to Paradise. Warned by friends, Linda and Randall grabbed their lock box, important papers, their guitars, cats, and some clothing and made their way through the raging flames, smoke, and traffic until they were out of harm’s way. Linda was concerned about her mother, who lived in a retirement home in the area. Communication during the tragedy was sketchy, at best. It wasn’t until a few hours later that Linda found out that her mother was in a vehicle that was surrounded by flames and, sadly, she perished in the fire.

The fire was ignited by a faulty electric transmission line in Feather River Canyon and a fierce wind drove the fire uphill, followed by a firestorm that originated in the town of Paradise. The fire caused at least 85 civilian fatalities and covered 240 square miles. It destroyed an estimated 18,804 structures (95% of the structures) within four hours.

Imagine losing everything—your home and its contents. More importantly, imagine losing a loved one at the same time; the incomprehensible pain of it all.

Linda said, “I think the hardest part of the fire (other than the loss of my mom) has been the loss of our community. Our friends are now all scattered across the U.S. But we are so looking forward to making new friends here in SaddleBrooke. If people see us, nothing would make us happier than if they would stop and say hello.”

It’s hard to say how each of us would come to terms with such tragedy. Suffice it to say, we have been fortunate not to have faced a catastrophe of this magnitude.

This I have learned.