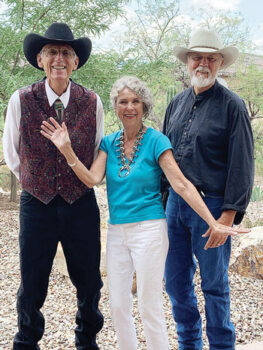 Three SaddleBrooke Ranch residents will perform a free concert on Saturday, March 4, at 7 p.m. in the Sol Ballroom at the Ranch. Bruce and Nancy Carlson and Ken Wilcox sing as Carlson/Wilcox 47, or CW47.

This talented trio has been together at the Ranch for about three years, but their collective experience of more than 55 years playing music on both coasts better reflects the great sound they have. Last year more than 200 folks attended the concert, and we hope for another good turnout.

CW47 has a load of new tunes and will, of course, sing old favorites, too. Come out and enjoy!

A new policy at SBR does not allow them to advertise a noncontracted group such as ours. We’re doing a free concert, so this article will be your only notice of the concert. It will not be on the regular weekly SBR Events email. Mark it on your phone and calendar now!

CW47 plays a variety of music, including originals and covers of both current and traditional folk songs, reflecting the style of James Taylor, Jim Croce, Ian Tyson, and others. You could call their music Southwest Folk Americana.

Bruce and Nancy met at a New York college and started singing at coffee houses, wine and cheese cafés, and folk festivals. Bruce writes much of their material and has a song on an album produced in Nashville. In the 2018 Tucson Folk Festival, Bruce was a finalist in the lyric competition. They’ve played many other venues in New Mexico and Arizona, including several gigs at the Music in the Park series at Catalina State Park and a Dark Sky concert at Oracle State Park.

CW47 is geared to a listening audience who will appreciate the lyrics, complex harmonies, and intricate work on acoustic instruments. So, plan for this evening of music, both laid back and energetic, a good cross section from early folk days, the ‘70s, and up to today.

The concert is free, but there will be a tip jar for donations. All proceeds after paying SBR charges for room setup and chairs will go to local charities to support jail and rescue mission ministries.