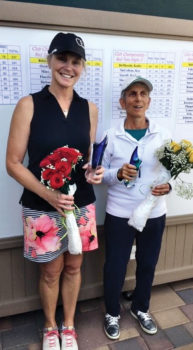 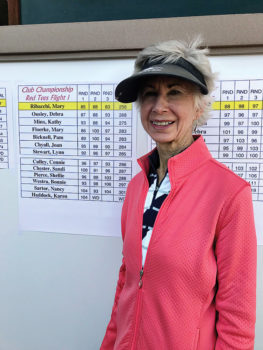 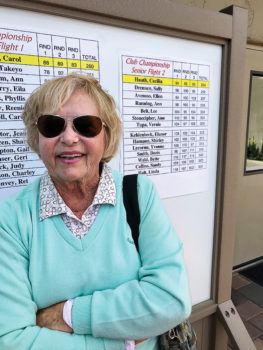 The last day of SBWGA-18’s Club Championship broke cloudy and cool, but the luck of the Irish was with our major tournament contestants. A bright St. Patrick’s Day sun appeared and warmed the players as they made their way to the clubhouse. A small group of spectators, evenly spaced, applauded the final pairings, then came to the patio in front of the pro shop to cheer for the winners.

Congratulations and elbow bumps to our winners and everyone who participated in this three-day test of endurance and skill.

Three cheers for our 2020 Club Champion, Helen Graham, who led the tournament wire-to-wire with scores of 71, 81, and 79. Helen was presented with a bouquet of red roses and a beautiful engraved vase, donated by our 2019 president, Sherry Fitzpatrick. Later in the year we will bring you photos of our winner with the club’s crystal trophy.

Our 2020 Senior Club Champion winner with a three-day score of 260 goes to Carol Bidwell. She proudly held her yellow roses and an engraved vase also donated by Sherry Fitzpatrick.

Our sincere thanks go out to Barbara Turriff, Kay Cruise, and their gang of unindicted co-conspirators for the hard work and long hours they put in to make this tournament a success. Circumstances beyond their control resulted in the cancelation of the Championship Awards party and these co-chairs acted quickly and got the information out to all the participants. And, just so you know, it’s harder to cancel a party than it is to put a party together. You might want to ask if Kay plans on going into the shrimp selling business.

Our staff photographer was not able to capture Kodak moments of all our winners and we hope to do so at our next luncheon meeting.

Until next time, get out and play. Our crazy weather looks questionable in the morning, but by afternoon it’s beautiful.