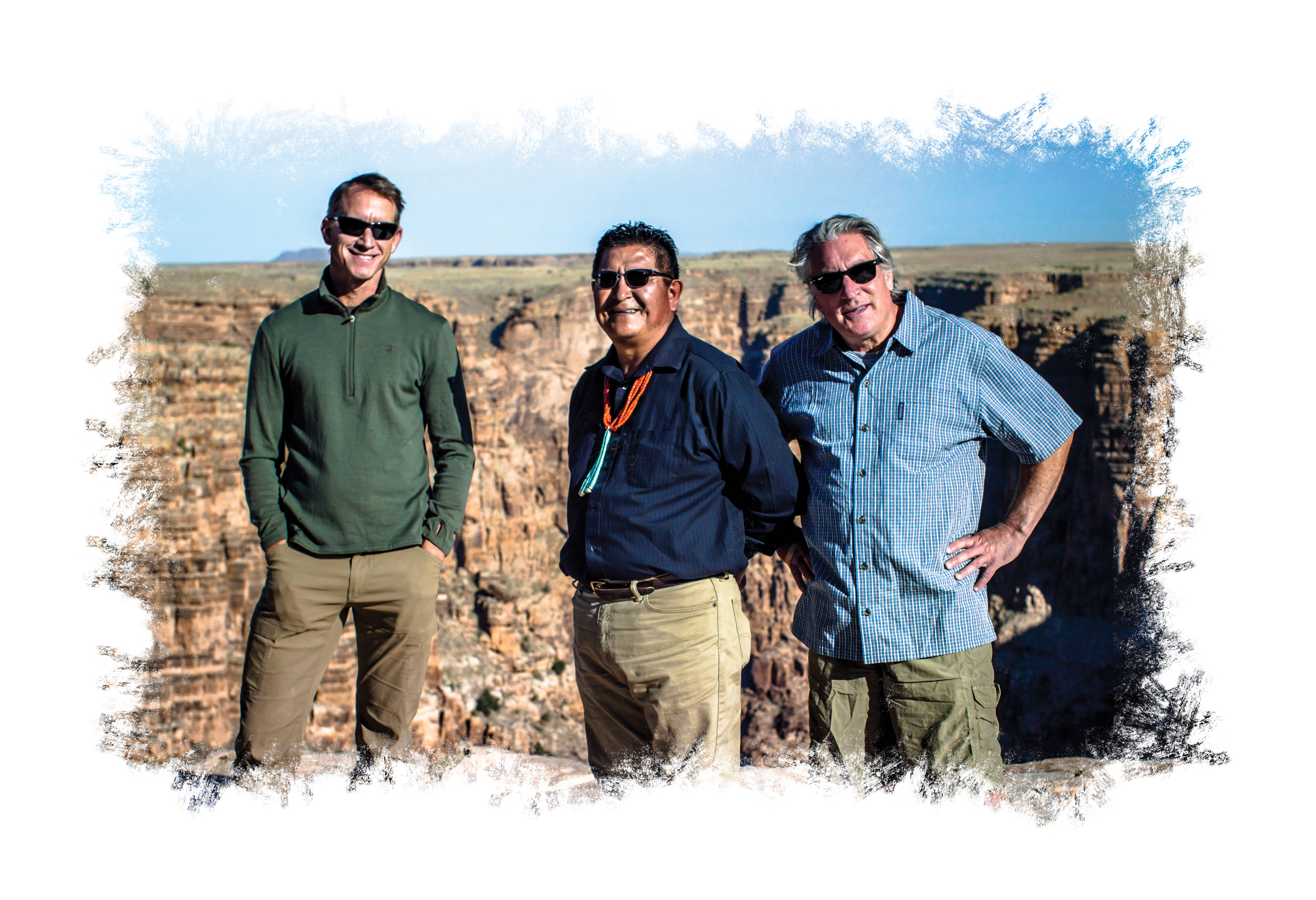 By now you’ve hopefully heard about the exciting new multimedia presentation about the Grand Canyon that’s debuting at SaddleBrooke next month. Called Ongtupqa, it features narration, music and visual art to explore the Hopi connection to the canyon.

The word Ongtupqa translates from the Hopi language as “salt canyon.” It’s the tribe’s word for the Grand Canyon, which they consider their spiritual homeland. Three performing artists—a vocalist, a flute player and a drummer—will bring the story of the canyon alive for SaddleBrooke audiences on November 7.

But there’s also a story behind the story about how these three men came together. It begins in 1931, when six ancient wooden flutes were unearthed from a cave in the Prayer Rock Valley of Arizona. Skip to 1995, when a flute player saw the flutes at the Arizona State Museum in Tucson and created replicas. One of the flute replicas found its way to Gary Stroutsos.

Stroutsos, a renowned flute player, has spent the last 25 years exploring Native American flute traditions. Once he got his hands on the flute replica, he wanted to know more about it. He tracked down Matthew Nelson, an ethnomusicologist, who thought the flute was of Hopi origin.

“Before I knew it, Gary was on a flight from Seattle, and we were driving across the Colorado Plateau toward the Hopi Reservation,” Nelson said. “Along the way, Gary shared a dream he’d had the night before about playing the flute in an old village high on a mesa.”

When they arrived, Nelson introduced Stroutsos to Clark Tenakhongva, a Hopi elder and vocalist. As soon as Stroutsos began playing the rim flute, Tenakhongva was awestruck and said, “The flute is definitely Hopi. We used to have flutes like that—long flutes—but they haven’t been played here for a very long time.”

Tenakhongva took Stroutsos and Nelson to Walpi, a Hopi village on First Mesa that has been continuously inhabited for more than 1,100 years. As they rounded the last turn toward the top of the mesa, Nelson heard Stroutsos gasp, “This is the place…the place from my dream.”

After Stroutsos played the flute inside an ancient adobe home on the mesa, Tenakhongva shared an eerily similar dream: “In the dream, I am standing on the Hopi mesas. When I wake up, I try to sing the song I hear in the dream, but I can’t sing exactly what I hear. I know now that it’s because the sound in my dream isn’t my voice—it’s your flute!”

The rest, as they say, is history. The trio reunited at the Grand Canyon’s Desert View Watchtower to record Tenakhongva’s songs with accompaniment from Stroutsos’ rim flute and Nelson’s clay drums. The result is what SaddleBrooke audiences will see and hear—an authentic representation of Hopi history and spirituality recorded within the most culturally significant structure in Grand Canyon National Park. To accompany the recorded narrative and live musical presentation, breathtaking photographic panoramas of the canyon will be shown on the large screen at MountainView.

Tickets for the 6:30 p.m. show on Wednesday, November 7, are on sale for $15 at the MountainView Administrative Office from 8:00 a.m. to 4:00 p.m. Monday through Friday aand online at https://tickets.saddlebrooketwo.com. A special themed dinner of chicken enchiladas and side dishes to complement the program will be offered in the Bistro before the  show for $13.99.