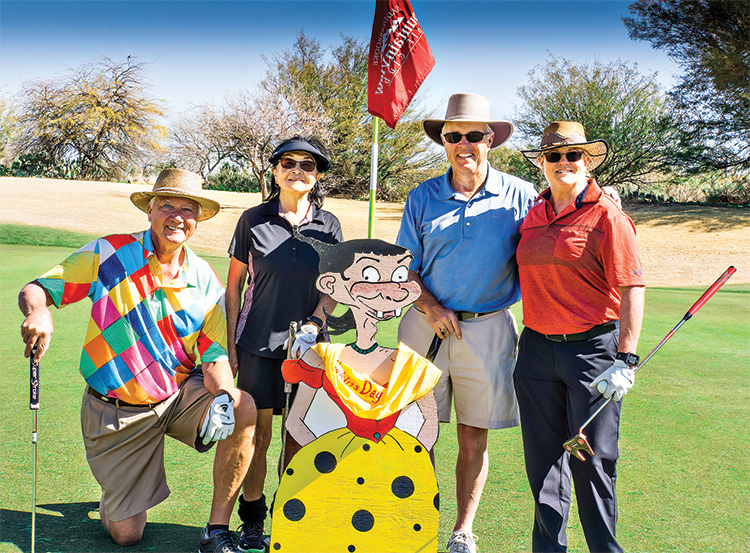 Each year, the MountainView/Preserve Women’s and Men’s Golf Associations (MPWGA and MPMGA) alternate hosting the Sadie/Bubba golf event. As Feb. 18 approached, the Sadies sharpened their spikes and set out to snag ‘n bag one of those fine Brooke Bubbas from our little village in Podunk Patch. Seein’ as how there aren’t actually any coyote-ugly gals in all of SaddleBrooke, nor any javelina-homely gals in all the Catalina Hills, and that the eyesight of the Bubba boys has declined in equal proportion to the fading beauty of the Sadie ladies and the speed at which they can still run, the chase wasn’t really much of a race.

Prior to the 8:30 a.m. shotgun, Mike Karpe took credit for the perfect golf day and explained how country bumpkins play a modified scramble. Two Sadies and two Bubbas formed each team to obtain a best ball score on each hole, with a lot of Bubba buffoonery and bunk along the way. Two of the par 4 dance floors required careful steps not to flubba-dubba the putta by knocking it into the hole on the green instead of through the hole in the Sadie or Bubba board. On par 5 greens, all four clodhopper club-hackers had to putter around sharing the same flatstick. Without too much more hoopla, but a lot of hubba hubba, the 88 hicks with sticks sped off to their green and yellow tee boxes ready to start the 18-hole hillbilly hullabaloo.

After crossing their 18th green finish line, the Bubba brothers and Sadie sisters headed to the MountainView Ballroom where, a fearin’ a backwoods preacher was awaitin’, they were pleased to find instead some good old bubba-grubba of hillbilly burgers, salad, chips, and raspberry bars. It was another delicious and satisfying lunch prepared and served by our MountainView Bar & Grill staff. After the country cousins had finished licking their fingers and wondering what cloth napkins and extra forks were for, Beverly Smith announced the winners.

The 22 team scores ranged from 66-79, with payouts ranging from $20 to $65 to each individual in 11 winning teams. Dan Nordhill, Ann Van Sickel, Bill Burnett, and Carey Ricard placed first with a score of 66 and a payout of $65. Jim Van Sistine, Marsha Thompson, Leonard Kirklin, and Marilyn Brewer placed second with a score of 68 and a payout of $60. There were 3-way ties for the remaining 9 places with team scores of 69, 70 and 71, and payouts of $50, $35, and $20. KP winners, who pocketed a picture of Andrew Jackson were new member Carey Ricard for the Sadies on hole 8 and Jim Van Sistine for the Bubbas on hole 17.

Each booboisie Bubba received a party favor. And by favor, the Sadies mean it would be a really big favor if this little packet of deodorant, toothpaste, and shaving foam got used. We’ll never make city slickers outta them local yokels, but we do like our fellers clean. Bubbas who do a little rub-a-dub-dubba and a little scrubba-in-da-tubba now an’ again might clean up real good. Perhaps if that first Sadie maidie back in 1937 had used a little primp ‘n prink packet, her father Hekzebiah Hawkins wouldn’t have had to use such an extreme scheme to get “the homeliest gal in all them hills” a husbubba. The ugly truth is, some Sadie soap ‘n sudsin’ to go with her frilly frock and blue baubles might have bamboozled a Bubba and avoided a family intervention.

As we put a cap on this fun day of course cartooning, the speech bubble of the 19th frame of the Lil’ MPWGA’s comic strip was blown way up with thanks to many a folk. Our event chairs Beverly Smith and Eva Langdahl put a lot of hard work and humor into planning this folklore festivity. Barb Laskowski took on the task of managing the tee sheet as befuddled Bubbas were snatched and matched. A huge buck-toothed grin of thanks to Patrick Shaffer, DDS, our key event sponsor since 2002, whose team helps us keep the two or three good teeth we started with and whiten the ones yellower than an ear of country corn. As always, golf-loving gratitude to Matt Hudson and Mike Karpe, for supporting our golf events. In honor of our relations back in Dogpatch, KY, keep the Sadie saga going. Extra special thanks to Andrea Gray for memorializing our MPWGA events and good times through her extraordinary photography talent and slide show creations. It takes an entire village to fit so much fun into one single day.