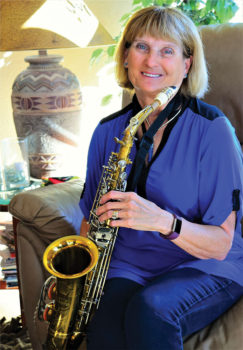 In 1995 Brenda played twice for Pope John Paul II, one of which was the band in a private audience with him. In 2000 she toured and played in France, Belgium and Luxembourg. Brenda credits her music for taking her places and providing her opportunities and experiences she might never have gotten as a young woman.

As a member of the SaddleBrooke community Brenda enjoys playing tennis, pickleball, line dancing, hiking and spinning. She is a member of the Santa Catalina Church where she crochets Baptismal Shawls and Prayer Shawls. As a member of Volunteer Optometric Services to Humanity (VOSH) Brenda has just this past February returned from Mexico where the team treated over 2,500 patients, from two to 88 years old. She belongs to Knit Wits where she crochets hats for kids and has been an active member of SaddleBrooke Senior Village for the past three years.

Brenda and Owen have been married for 17 years and have four children. They travel back to Wisconsin each year where Brenda is playing her sax with the local VFW and Sun Prairie Community Bands. She is still involved in her field work as a PRN Echocardiographer.

The SaddleBrooke Winds and Strings is proud to have Brenda as a member of the band. She is quick to share the fun and joy of making music.

If you would like The SaddleBrooke Winds and Strings to entertain at your next gathering, please call Jim
at 520-241-3522.