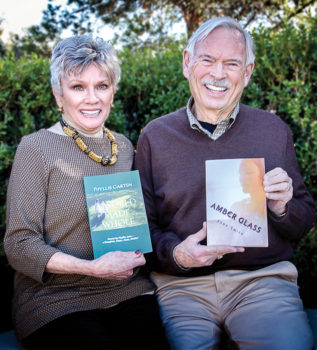 This month we are pleased to introduce two of SaddleBrooke’s talented writers, John D. Smith and Patricia Fremont-Smith. Both write in a variety of forms with an emphasis on poetry.

Patricia was born in Cincinnati, Ohio where she graduated from Sycamore High School. She earned her BA in liberal arts at University of the Pacific, Stockton, California. After working for a number of years, Patricia returned to UPSC doing post-graduate studies in the art department.

John was born in Belle Plaine, Kansas, moved to Wichita while in high school, and later attended the University of Kansas, obtaining two degrees. He then earned his Ph.D. at the University of Wisconsin, Madison. Between his schooling, he served four years in the Marine Corps. Later, he taught for three years at the University of Wyoming and then the University of the Pacific, where he met Patricia. John’s specialty was the English Renaissance and he taught courses in literature and writing. For the last few years of his career he focused, as administrator/teacher, on interdisciplinary general education.

John’s interest in literature began very early, but his writing was a hobby until 2013 when Patricia organized his stacks of writings and gave him the needed push to publish.

Patricia has always loved literature and has written poems, but she became a serious writer two years ago.

Patricia and John share a home office which serves as their writing space. According to them, “A writer’s needs are simple: quill, pencil, pen, typewriter, or computer.” They both work with Apple computers. For both, the enjoyment of their craft comes from having an idea or vision and getting it into shape “by revising it and polishing it until it’s right and rings true.”

John and Patricia have been to Europe, Mexico, and much of the U.S. Their current plans are to see more of beautiful Arizona. In 2006, they moved from their longtime home in Stockton to SaddleBrooke after studying many retirement communities. With its lovely setting, amenities, activities, and housing choices, SaddleBrooke was the clear winner.

The two of them joined the SaddleBrooke Gift Shop in autumn 2019 to present their writings. Patricia published a collection of her beloved deceased sister’s poems (the net proceeds go to the Senior Village at SaddleBrooke). John also sells his book of poems in the shop.

Come visit John and Patricia at the Gift Shop. Both enjoy talking with customers and connecting with the shop’s creative members. They suggest, “When you think of gifts for others or for yourself, think of the SaddleBrooke Gift Shop, as it is a rich source in a small space.”

The shop features handcrafted gifts, books, clothing, jewelry, artwork, games, and greeting cards. The SaddleBrooke Gift Shop is located near the Clubhouse in SaddleBrooke One (next door to the Fitness Center). Currently it is open every day except Sunday from 9 a.m. to 4 p.m.