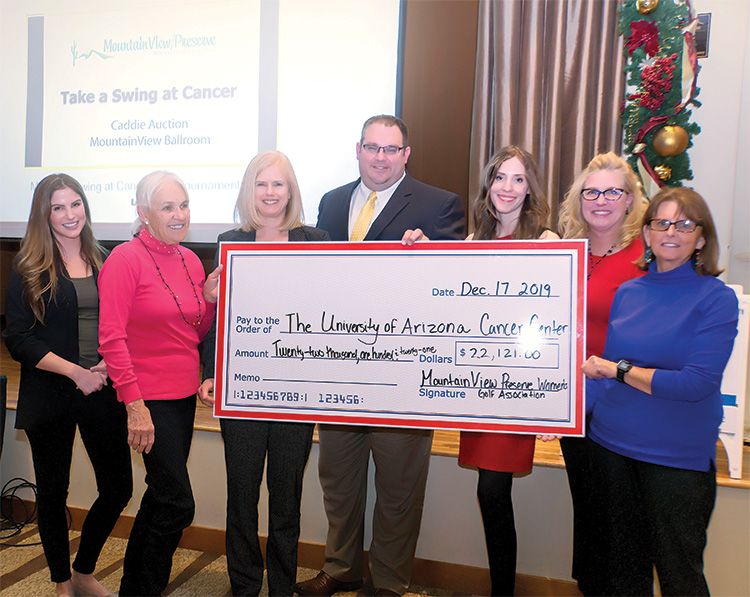 The MountainView/Preserve Women’s Golf Association (MPWGA) raised a record high $22,121 in support of the University of Arizona Cancer Center at its annual “Take a Swing at Cancer” tournament. The huge check, representing a huge heart-felt effort, was proudly presented on Dec. 17 in honor of the men, women, and children who are fighting cancer, who have survived, who fought courageously but lost their battle, and who may yet face the challenge of this devastating disease that in some way affects us all.

The tournament was held at the MountainView Golf Club Caddy Shack, starting the evening before with a “Caddies and Cocktails” event auctioning off a cavalcade of caddies supplied by the MountainView/Preserve Men’s Golf Association (MPMGA). There proved no better way to loosen the lips, widen the wallets, and charge up those credit cards than a happy hour to get those sassy lassies bidding way up on those caddy laddies. Emcees Matt Kambic and Dennis Marchand gave each buff ‘n burly bag boy a seductive sales spiel as they paraded for the hootin’ ‘n hollerin’ boisterous bidding biddies. There was no caddy lack here, as each and every one of the 34 brawny bag bearers went for top dollar, with the highest bid driven up well over $100. Was it his screamin’ loud neon argyle and plaid John Daly outfit? His magic foot wedge? His sand bottle large enough to fill a divot a backhoe would be proud of? At the end of the clamoring caddy kerfuffle, the big caddy sack was stuffed with money, and the MPWGA had invented a new definition of “cash ‘n carry.” Women pay cash and men carry. We like it!

The 25 teams and their caddy clan began the modified scramble with a shotgun early the next day, Nov. 19. With no caddy slack or back flack, the brawny beasts of burden picked up the messes the women made in the fairways and bunkers, and provided curb and club service. The women tried to cause a little club conundrum by asking their caddies for their brassies, baffies, mashies, and niblicks, but they came right back with their catty caddy crack, “With a knick knack caddy whack, just give the girl a club.” To further add to the stash of caddy cash, the players were allowed to tip their caddy to tee up and drive their ball. Par 3’s excluded, up to four caddy smacks were allowed per hole. Well now, what woman wouldn’t be willing to lay down a handsome sum to tell a man how to drive, where to drive, how fast to drive, or how close to get to other drivers! And, what man in all of SaddleBrooke wouldn’t put up with all that yakety-yak caddy attack to support the cause! And, by the way, you cavorting caddy chaps, we played golf just like girls, so we hope you paid close attention and learned something!

After playing, everyone made caddy tracks back to the Caddy Shack for a buffet luncheon of turkey with all the fixings. Our thanks to Jessica Ward, Food and Beverage at MountainView Bar & Grill, and the staff, for this magnificent caddy snack. Having been overly satiated, another round of monumental fundraising began. Over 70 raffle items and a silent auction featuring tables of gift cards, handcrafted items, artwork, and theme baskets brought in an abundance of additional proceeds. The string of sold honor ribbons paying tribute to family and friends who have faced cancer covered almost an entire wall of the ballroom.

We thank our two major tournament sponsors, Ironwood Dermatology and the Margie and Dottie Team at Long Realty, who year after year remain committed with us to this deeply meaningful event. We also thank our two sponsors of the new Caddy Kick-Off event, Sparkle & Splash Pool Care and Linda Stack, owner of Travelinda, LLC. Our event chairs, Annie Peaker and Donna Yon, spent months of time coordinating and planning, and knocked it right in the hole concocting the caddy consortium. In turn, Annie and Donna commend their hard-working committee and volunteer team. And, credits to our two pros, Matt Hudson and Mike Karpe of M&M Productions for their part in making Caddy Flack I such a huge success. The MPWGA and MPMGA caddy pack hope to raise even more money next year when they release the sequel, Caddy Flack II.