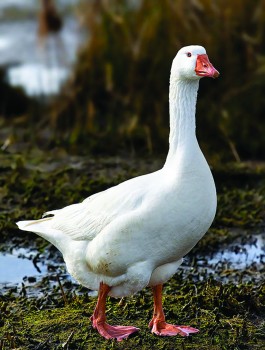 A long time ago, in a land far, far away, there was a tranquil forest where all the animals lived in peace and harmony—until hard times came. Month after month of hot, dry weather dried up the ponds, the lush grasses turned brown and the bushes and trees stopped producing the nuts and berries that the animals depended on.

At first the animals competed with each other and the strongest and most agile hoarded the limited food and water that was available. They refused to share or donate and even shunned and criticized the sick, weak or less fortunate.

One forest creature however, a humble goose named Charity, recognized that despite their differences in size, strength, color and origins, all of the creatures of the forest were more alike than they were different. Charity showed them they were more effective when they worked together. She taught the birds to fly far and wide in search of the few small ponds that remained. She taught the climbing critters to share their nuts and berries and persuaded burrowers to share their edible roots. Charity’s tireless efforts so inspired the creatures that they all willingly donated the food and water they didn’t need.

Eventually the rains came and the forest once again became lush and green. But the forest had changed; the animals had a new appreciation for how trivial their differences were and that everyone benefited when they helped each other. These lasting changes were not lost on the humble goose. She and her devoted gander taught each of their goslings about how generosity had transformed the forest. They in turn, resolved to teach each of their offspring and the story of the humble goose not only travelled far and wide, but was passed on from generation to generation. Many years later a man named Aesop was so inspired by the story that he wrote a children’s fable about a goose that laid golden eggs.

All this brings us to today: Flying over southern Arizona, a goose named Charity, namesake and descendant of the legendary goose of the forest, noticed the dry desert landscape below. She was reminded of the stories of the dried up forest passed down to her from generation to generation by her great grandma Charity.

As she glided over a small town called Catalina, a group of people were talking about what they might do to make a difference in their local community. As they took note of Charity’s silhouette against the blue desert sky, they were immediately reminded of Aesop and his story of the goose that laid the golden eggs.

The legend of that humble goose from the forest lives on today as that small group of volunteers parlayed their inspiration from the sky into a present day enterprise that pulls hundreds of volunteers together to raise millions of dollars for local charities. The official logo of the Golden Goose Thrift Shop illustrates Charity with two golden eggs. The eggs represent Impact of Southern Arizona and SaddleBrooke Community Outreach, the two organizations that receive the funds raised by the Golden Goose.

To this very day, in honor of the noble Goose from the forest, the word charity has become synonymous with giving and generosity.

That’s the way it all happened and every word is true. Please keep the spirit of Charity alive by supporting the Golden Goose Thrift Shop and, by the way, teach your children and grandchildren the story, too.