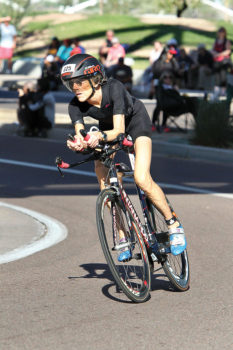 On Sunday, October 21 Arizona’s Half Ironman Triathlon race was held in Tempe, Arizona. A Half Ironman triathlon is exactly half the distance of a full Ironman (think Ironman Hawaii), which means competitors must first do a 1.2-mile swim, then a 56-mile bike and finally a 13.1-mile run. Participants are grouped into five-year age groups for competition purposes. This was an important race for Teresa, after having achieved a second place finish in the tough Half Ironman Boulder, Colorado on August 4. Since that race, she had increased her training to bring her fitness level even higher.

While rain had been in the area before race morning, by the start of the race at 6:20 a.m., conditions were pleasant, with partial clouds and sun. The Tempe Town Lake (where the swim would take place) often has outside PH tolerance levels for swimming. But measurements on race day showed the tolerance levels were satisfactory. The water temperature was 71 degrees, allowing for the swim to be wetsuit legal. The swim start was done in waves, based on age grouping. The swim course was one loop around the lake and Teresa’s swim was steady in spite of the fact that competitors were swimming facing into the sun, which made it difficult to see the buoy course markers. Teresa had a very fine swim but came into transition in second place, as the first place swimmer had a fantastic swim, finishing nine minutes ahead of Teresa.

But once Teresa was out of the transition area and on her bike, she began to steadily reel in the first place woman. The bike course consisted of three loops through the streets of Tempe. Normally, there can be significant winds on the course, but this day, the winds were moderate. Teresa kept her pace going, so that by the time she entered transition at the end of the bike, she had pulled back eight minutes of the first place competitor’s lead!

On to the run, which consisted of two loops around the shores of Tempe Town Lake. The run course has virtually no shade, and the sun is a real factor. If one has not been hydrating well and taking in nutrition, the run can lead to real trouble. Teresa’s nutrition strategy, which she had practiced thoroughly in training, was to take water and gel (electrolytes) on a 30-minute interval. The run is where Teresa really excels and she showed it on this race day, maintaining a ferocious pace. In so doing, she ended up overtaking the first place woman and winning first place overall in her age group by 37 minutes! Her finishing time also eclipsed the finishing times of all but the first place finisher of the male competitors in the same age group!

By winning her age group, Teresa qualified for next year’s Half Ironman World Championships, which is to be held in Nice, France in September, 2019. She did not accept the slot, so it became available to the next highest finishing competitor. After a short recovery period from the Tempe race, Teresa is now training for the Half Ironman Indian Wells/La Quinta in California in early December of this year. What an endeavor for a true Age Group Champion!