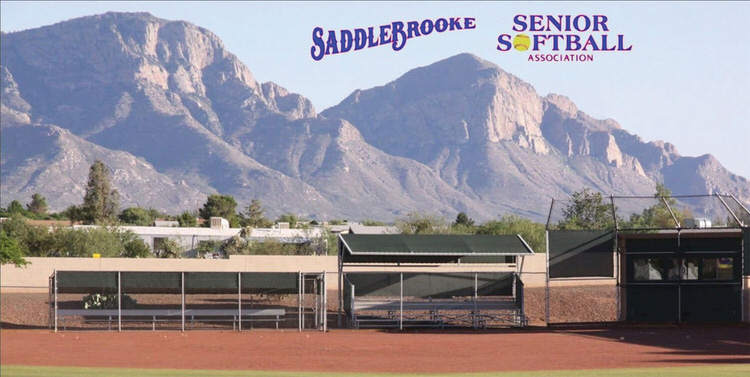 Mr. Softball is a longtime supporter of the game here at SaddleBrooke. He was kind enough to spend a few minutes with us to answer some questions about SaddleBrooke Senior Softball.

This interview was condensed and edited for clarity.

How is softball going at SaddleBrooke?

It’s better than ever. We’re in our 17th season and continue to grow with new leagues and players. We have 193 members and 60 local sponsors who support us. We recently made improvements to the playing field, so it remains one of the best facilities in Southern Arizona. Our annual Labor Day tournament in September was one of the best-attended ones by the community ever. So, you could say we’re on a roll.

That is impressive, Mr. Softball. Can you tell us about the current season?

We have 151 men and women playing in the fall season on 25 teams in eight leagues. Most play on more than one team. We play Monday through Friday, with games starting at 8 a.m. We have four games on Monday, three on Tuesday, two on Wednesday and Thursday, and three on Friday. The season ends Dec. 17.

Where are the games played?

We have our own state-of-the-art facility, complete with dugouts, electronic scoreboard, beautifully maintained field, stadium seating, and outfield fence lined with sponsor signs in the southeast part of the community. There are two umpires, a scorekeeper, and scoreboard operator for each game. It’s quite an operation.

Do you play year-round?

You mentioned that the Labor Day tournament was a big hit. Do you have any other tournaments during the year?

We anticipate a successful Veterans Day tournament Nov. 13. We also have a St. Patrick’s Day and Memorial Day tournament. These are great opportunities for the community to come together and celebrate the holiday. There is music, free food, and entertaining softball.

You’ve played here a long time. What do you see as some of the benefits?

It’s the three f’s: fun, friendship, and fitness. You put on a team uniform (with your name on the back, by the way), hit a ball, catch (mostly) and throw it, and run the bases. You get to be a kid again for two hours a day with your neighbors and friends. Being part of a team is a victory in itself, win or lose on the field.

My spouse has talked about playing but is concerned they might not be good enough. What do you say about that?

Nonsense. We have five leagues to accommodate every skill level. Most of our players hadn’t played in years before coming to SaddleBrooke, and many never played previously. We have 28 new players this year alone. We have a number of men in their 80s still playing. We offer skills training clinics for the entry-level leagues, practices, and a supportive environment. The league even provides bats and gloves if needed. As my daddy used to say, “The only failure is not trying.”

Apologies, Mr. Softball, but it’s not likely I will play next year. Are there other opportunities to get involved with the league?

Absolutely. We always need umpires, scorekeepers, and scoreboard operators. We’ll provide all the training you need. These are fun ways to stay involved with the game. Plus, you can always just come to the games and watch your friends and neighbors play. I can promise you a good time.

One more question, and thanks for talking softball with us. Where can I go for more information about softball at SaddleBrooke?

We have a wonderful website with team rosters, game schedules and results, standings, player statistics and photos, rules, and information on how to join. The address is saddlebrookesoftball.com. I look forward to seeing everybody at the field.