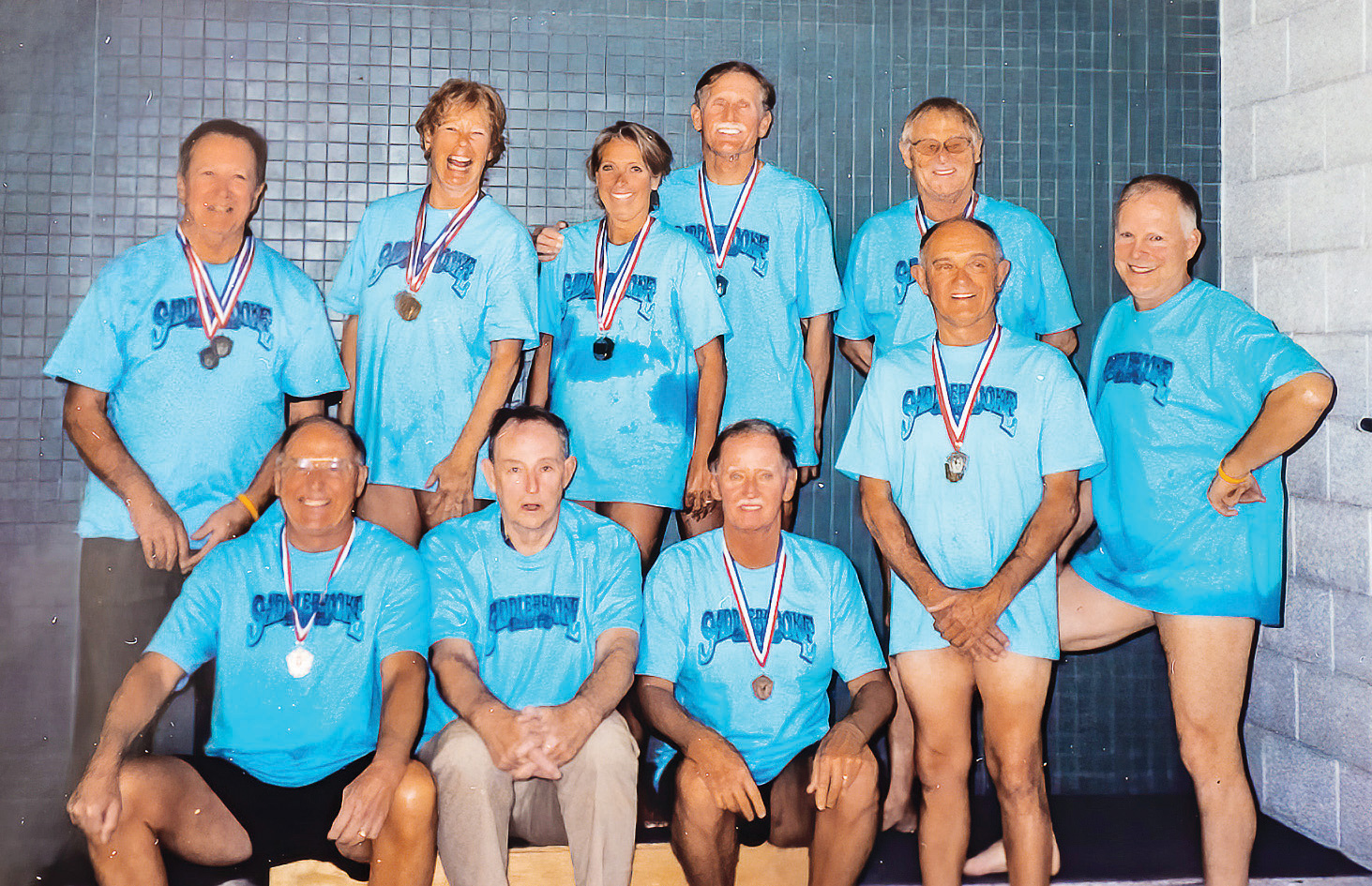 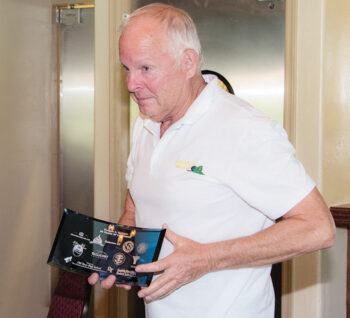 When Doug Springer moved to SaddleBrooke in 2003, there was a small group of swimmers, assisted by former SaddleBrooke resident and champion swimmer Sally Bolar, competing in the  local Senior Olympics. Doug offered to help coach us. We were swimming at the SaddleBrooke One lap pool, the only 25-yard lap pool in SaddleBrooke at that time with four skinny lanes. Trying to hold workouts there with more than one to a lane was challenging. Doug was instrumental in ensuring that the planned lap pool was up to standards for lap swimming and competitions. It was Doug who helped formalize the swim club into a more organized official club and expanded workouts as membership grew. One of our first swim club meets with Doug coaching was at Sierra Vista Senior Olympics. Jill Fritz recalled at that meet while doing the 200-yd. freestyle, both she and Jack were ready to stop after 150 yds. Doug was right there yelling, “Don’t stop! You have two more laps to go!”, encouraging them that they could do it. Doug has continued to guide, inspire, and encourage all swimmers.

Membership of the swim club continued growing and Doug expanded workouts to three and then four days/week and eventually to three workouts each of those days. Initially, Doug coached all the workouts but then encouraged others to coach as well. The swim club now has 14 additional coaches (10 of whom are U.S. Masters certified) to coach the 124 members (including 13 married couples,) many of whom compete in the U.S. Masters (USMS) meets and/or Senior Olympics/Games. He also encouraged members to get involved with the state and national organizations. Three swim team members have served on the board of the Arizona State Local Masters Swim Club. Six members certified to become USMS Officials and have officiated at meets ensuring that rules of swim competition are followed. Doug wanted the club to be all-inclusive, not just competitive, and encouraged fitness and recreational swimmers to join, encouraged social activities (some say they just joined for the parties!), fun low-key pool games, events and relays, outside activities (i.e., the Easter Egg Hunt, Grandkids’ Pool Games), and volunteer opportunities such as helping at swim meets (not only ones in which SaddleBrooke competed, but others like the swim program for underprivileged children held at the Oro Valley Pool). The swim club made donations to pickleball, softball, dog park, as well as equipment donations to a local high school swim club. One of the SaddleBrooke Swim Club members volunteered to coach that high school team for many years. The “Adult Learn to Swim” and “Let’s Swim” programs were offered here for residents free of charge to provide a life-long learning activity. Additionally, Doug began holding clinics for swim development and stroke improvement and also brought in experts to hold clinics for our swimmers.

Through Doug’s efforts and encouragement, the swim team has risen to an impressive competitive level, with the SaddleBrooke USMS swimmers placing first in the 2013, 2014, 2015, 2017, and 2018 State Short Course Yards Championships and the 2014, 2016, 2017, and 2019 State Short Course Meters Championships as well as the 2019 first place win as part of the State Masters Team at Spring Nationals in Mesa and first at the 2019 State Long Course Pool Championship Meet. Through Doug’s initiative, the swim club hosted the AZ Short Course Championship twice and the Long Course Pool Invitational twice (would have been three times but COVID-19 canceled it). Doug also organized an official Centenarian Meet here for 100-year-olds, Fred Klein and Mary Anne Cooper, with both setting national records. Other notable achievements include 29 All-Americans, three national pool record holders, 16 national champions with six national champions at the Canadian National Championships.

Notably, so compelling has been the growth, achievements, and outreach of the SaddleBrooke Swim Club through Doug’s ceaseless efforts that it attracted the attention of the CEO of USMS (Bill Brenner) to visit and learn about our club’s success and how that might serve as a model for similar active adult communities.

Doug inspires all of us yet is quite humble about his own outstanding accomplishments preferring to focus on the swim club and its members. He is an All-American multiple times, has set an impressive number of state and national individual records as well as on relay teams that set state and national pool records and in 2016 set an age group national and world record for the 100M breaststroke, 200M breaststroke, 200M butterfly, and 400M IM. In 2015, Doug received the prestigious Kerry O’Brien Coaching Award recognizing 50 years of coaching and inspiring swimmers of all levels and abilities. For all of Doug’s contributions to the swim club and the community, we are forever grateful and wish him well as he retires from coaching. Terry Heggy is taking over the swim club that Doug developed from its small beginnings into a dynasty of swim clubs with an all-encompassing inclusion. What many people may not realize is that Doug did all this for 17 years as a volunteer! According to Doug’s wife, Nancy, this has been a “labor of love!”