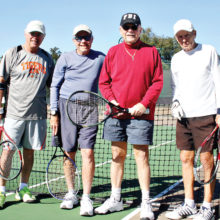 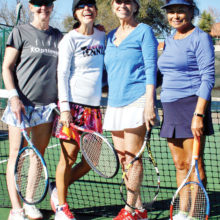 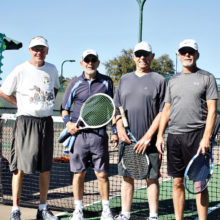 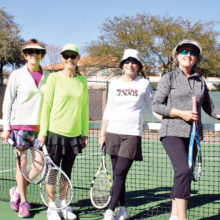 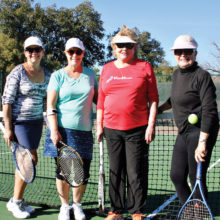 Debbie McGeehan
Awesome tennis, wine, beer and snacks, all happening at our tennis center! Who wouldn’t have enjoyed an afternoon of spectating, playing and socializing at our beautiful venue? Taking place in good weather over six Wednesday afternoons in February and March, Social Team Tennis was another successful and fun event hosted by the SaddleBrooke Tennis Club. This was the perfect friendly event that allowed new and long-time members to play together on teams. Listening to the laughter and chatter on the patio reflected how much all participants enjoyed themselves.
As usual, it required many volunteers to make the event a success. Debbie McGeehan and Dave Lamb managed the event, starting with recruiting players and captains and finishing with the final clean up on the patio. Debbie provided delicious snacks, including baking what Dave claims are the best chocolate-chip cookies in the history of the universe! Dave helped keep the production running smoothly and saw to it that tennis balls, beer, wine and soft drinks were purchased for each Wednesday. He had great help from Joe Schullik, our ambassador to tennis and volunteer extraordinaire, who transported the bottles and coolers to and from the patio.
All the team captains did a fantastic job of arranging balanced matches on each court. Working around the team members’ schedules was many times a challenge.
The captains of the four men’s teams in winning order were Hawks (Gary Rowell), Eagles (Mike Oberski), Falcons (Darrell Jackson) and Vultures (Dave Lamb).
The captains of the four ladies’ teams in winning order were Manhattans (Sandy Schoenleber), Mojitos (Tina Huber), Martinis (Ginger Riffel) and Margaritas (Cindy Madsen).
Al Bush is recovering from back surgery, but he was there every Wednesday to assist wherever needed. He iced down the drinks, opened wine bottles, kept the play on schedule by blowing the musical horn and was a great spectator!
A few courts would have been defaulted were it not for the wonderful subs who volunteered to play where needed to fill a vacant spot.
We have a terrific bunch of STC members; Debbie and Dave thank everyone who helped in even the smallest way to make this such a wonderful event!
Don’t miss out on the fun; consider playing on a team next year!
That’s the thing about STC. It is the venue for fun in the outdoors. To join us, just call Connie Kacer, Membership Chair 825-7585 or the STC office 825-0255. It’s that easy.
Browse through hundreds of photos and find event details on our Facebook page, you don’t need a Facebook account, www.facebook.com/saddlebrooketennisclub.