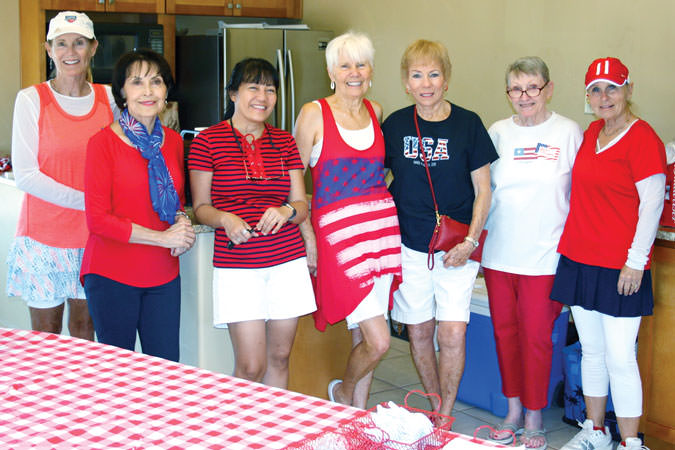 As usual, the Fourth of July provided us with a beautiful day to celebrate, play tennis and enjoy a BBQ potluck.

We had players on 15 courts playing mixed doubles with the pairing and format developed by Melanie Murphy, Carol Eisenbraun and Mike Oberski. Everyone enjoyed the spirited tennis in spite of the heat and were rewarded with lemonade and ice tea on the patio after their matches.

Due to an unexpected glitch with our grill master, Jerry Fay and Richard Boyer stepped in to fire up the tennis center grill and cooked hamburgers and hot dogs just in time for the potluck to begin.

The potluck fare was exceptional with crockpots of baked beans, salads, chips and condiments to enhance the hot dogs and hamburgers. There were also plenty of yummy desserts. When everyone was seated, you could tell from the noise level that a good time was had by all.

To conclude the day, John Sochacki introduced new members, wished Rufus Renfrow a happy 92nd birthday and thanked the more than 80 attendees for their support of the tennis club. As with any event of this size the volunteer participation to make it a success was outstanding, and John thanked those by name.

Tennis pairings and form was done by Melanie Murphy, Carol Eisenbraun and Mike Oberski. Set up was provided by Richard and Diane Boyer and Rufus Renfrow. Decorators were Debbie McGeehan and Carol Eisenbraun.

The kitchen crew was led by Linda Oberski and Bea Dillehunt with help from Ritchel Duffy, Cheryl Fay, KK Kortus and Dagmar Hampton.

Judie Renfrow checked everyone in and collected guest fees for non-members, while Carol Eisenbraun passed out tennis balls and confirmed that all tennis players had arrived at their courts.

Our club photographer was Ritchel Duffy. Our M.C. was John Sochacki. Tear down and clean up was provided by Jay Clary, Scott Wilber, Charles Kahng and many others who stayed to help with table, chair and general cleanup.

Jerry and Cheryl Fay were the event coordinators, and they know that they could not have done it without the many exceptional volunteers.

Our SaddleBrooke firemen always enjoy our leftovers, which were taken to the station at the close of our event.

Enough can’t be said about the SaddleBrooke Tennis Club members and their willingness to make all our social events a success.

That’s the thing about the club. It is the venue for fun in the outdoors.

To join us, contact Connie Kacer, membership chair, at 825-7585 or the SaddleBrooke Tennis Club office  825-0255. It’s that easy. You also can browse through hundreds of photos and find event details on our Facebook page, www.facebook.com/saddlebrooketennisclub.