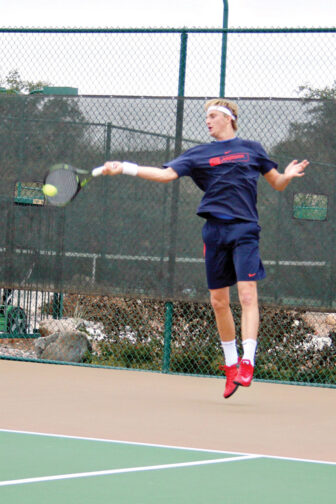 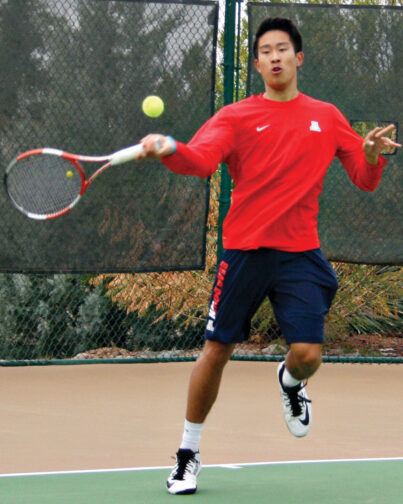 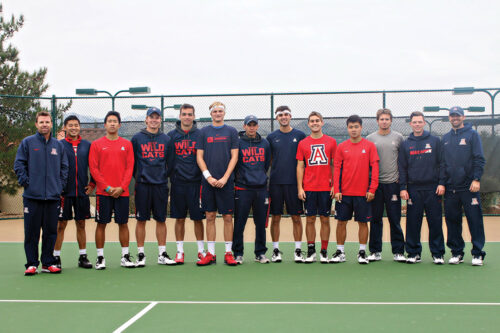 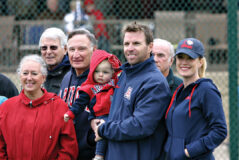 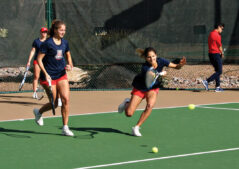 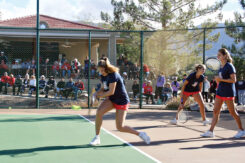 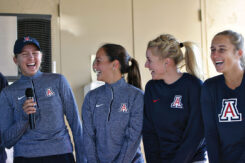 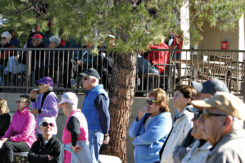 SaddleBrooke was turned into Wildcat Country in January as the SaddleBrooke Tennis Club presented the University of Arizona women’s and men’s tennis teams for a practice session (women) and Red vs. Blue exhibition matches (men).

For the second year in a row, and as a precursor to an annual event, all SaddleBrooke residents were invited to the Tennis Center to watch these young champions. The STC provided free cups of hot Starbucks and delightful snacks while the players were treated to hot pizza. (Donations were accepted to partially defray the cost.) The club sound system was devoted entirely to Wildcat music that included their famous fight song, Bear Down Arizona. STC volunteers provided seating for the large crowd adjacent to the tennis courts and on the spacious patio.

There’s something exciting about watching the quickness and agility of young athletes. Their determination is an inspiration to everyone who aspires to a healthy lifestyle. Young ladies and men laugh in the face of challenge and struggle against strong opponents in a way that raises our own ambitions and excites in us the will to persevere against the aging process.

The weather was more or less cooperative in that it was dry, if chilly. The large crowd in the audience found sweaters more comfortable than tennis shorts, all in keeping with the joy of the outdoors in Arizona. Wildcat red and blue were the predominant colors around SaddleBrooke this January.

By presenting the U.A. Wildcats event in the cozy atmosphere of the SaddleBrooke Tennis Center, the STC once again projected its dedication to the health and enjoyment of all SaddleBrooke residents.

Remember to check out the STC Facebook page at www.facebook.com/saddlebrooketennisclub.