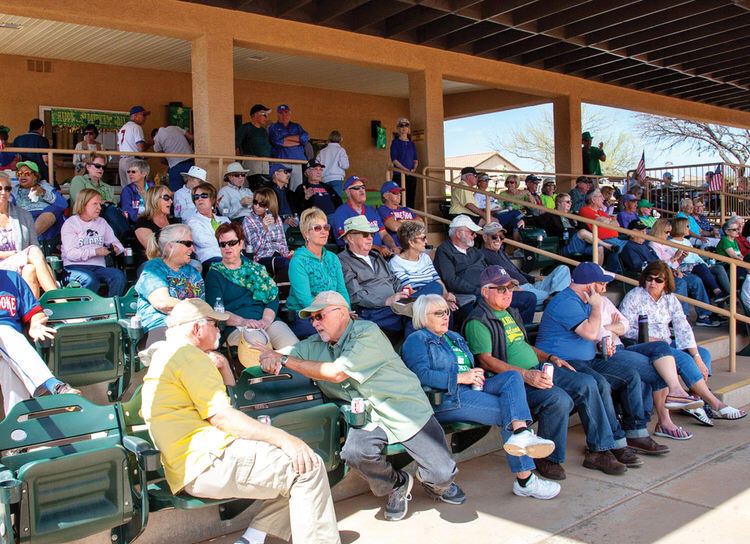 The annual SaddleBrooke Senior Softball St. Patrick’s Day Tournament is set for Saturday, March 19, at the community’s jewel of a ball field.

The tournament features lads and lassies who play in the league’s current winter season. Four games are planned, starting at 8:30 a.m. There will also be a first-ever home run derby competition at 1 p.m.

There won’t be any corned beef and cabbage, shepherd’s pie, or Irish soda bread, but free hot dogs, bratwurst, chips, cookies, soda, and water will be served starting at noon. Donations are appreciated. Doug Wagers from Window Wizard is doing the cooking, and Dr. Helen Jia, DDS, is the first-time tournament sponsor.

“It’s a fun day for all involved,” said Peter Romeo, SaddleBrooke Senior Softball Association president. “There is music, free food, and entertaining softball. It’s an opportunity to socialize with your friends and neighbors, and we look forward to another great turnout from the community.”

The tournament is one of four holiday events the league conducts every year. The others are Veterans Day, Memorial Day, and Labor Day.

St. Patrick’s Day is a cultural and religious celebration held on March 17, the traditional death date of St. Patrick, the patron saint of Ireland. The day commemorates St. Patrick and celebrates the heritage and culture of the Irish in general.

SaddleBrooke Senior Softball is in its 17th season. Games are played Monday through Friday, year round. There are 27 teams in the current winter season in nine leagues, accommodating every skill level. There are four games on Monday and Tuesday, two on Wednesday and Thursday, and four on Friday. Most players compete on more than one team.