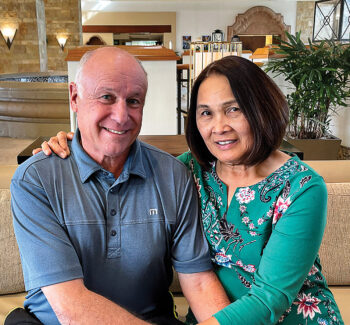 It is amazing how two lives intertwine—two lives who found each other despite the international odds. And so it was with Chris and Becky Hubbard, who have been SaddleBrooke residents since 2005.

Becky was born on the island of Cebu, located in the Central Visayas region of the Philippines. Her father worked for the Atlas Mining Company, then the largest mining company in Asia, where her family lived on the company compound. She graduated from the University of San Jose—Recoletos—with a major in Business.

Chris was raised in Kihei on Maui, Hawaii, but eventually lived on Lanai then Oahu. He graduated high school from Hawaii Preparatory Academy, from which Chris and Becky’s son would also graduate.

Chris started playing golf in elementary school, where he excelled in the sport. Indeed, Chris played junior golf and was the runner-up age group State Champion of Hawaii at age 12!

Chris obtained his degree in Tropical Agriculture from the University of Hawaii and started working for Dole on Lanai. His job would eventually take him to Cebu and, as they say, the rest is history. They married in 1983.

A friend of theirs suggested that they stop in to see SaddleBrooke while they were on a cross-country drive. They stopped, loved what they saw, and soon were owners at SaddleBrooke.

With Chris’ extensive background in agriculture, Omni Tucson National Resort hired him in 2006 as golf course foreman. In 2010, he took and passed the PGA “player ability test” to become a PGA member.

Subsequently, Chris worked at Mauna Kea, Hapuna and Quarry Pines Golf Courses, as Golf Course Superintendent, for eight years. He retired in 2020, but he still retains his PGA Class A membership.

In 2011, Becky started volunteering with the organization U.S.G.A. Girls Golf of Tucson and, eventually, Chris, as a PGA professional, was asked if he could help out as well, which led to a passion that they now both share.

Girls Golf of Tucson provides an opportunity for girls, ages six to 17, to learn to play golf, build lasting friendships, and experience competition in a fun, supportive environment, preparing them for a lifetime of enjoyment with the game.

While the LPGA and the USGA contribute to Girls Golf of Tucson, the program relies on fundraising efforts and donations to keep the program running. Admittedly, the year 2020 was a tough year for the program due to COVID, but Chris predicts better months ahead.

Chris and Becky’s son, Mark, is a medical sales representative, living in Prosper, Texas. And, yes, he is a golfer just like his father and mother!