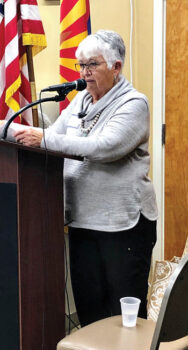 February: After we enjoyed a potluck supper, Maria Amado Byers, a SaddleBrooke resident, delighted us by sharing her family’s long history in Southern Arizona. The family was originally from Hermosillo, Mexico and settled in the greater Tucson area, north of Tubac, in the early 1850s, prior to the Gadsden Purchase that made Arizona a U.S. territory. The town of Amado, near I-19 and about 35 miles south of Tucson, was named for the family in the 1880s. The Amados were primarily cattle ranchers, and Maria spoke about growing up on the ranch with a well and no electricity. She brought a wonderful collection of family photos stretching back to the 19th century.

Meeting schedule and upcoming programs: Except where noted, we meet monthly, October through May, on the third Monday of the month at 5:30 p.m. in the SaddleBrooke One Activity Center. Our usual format is a potluck dinner followed by a program. Meetings are conducted in English.

March 21: Services offered by the Mexican Consulate of Tucson, by Daniela Celaya López and Judith Caballero

About us, membership: We are a culture club, not a language club, interested in all aspects of Latin American and Spanish culture, including art, music, and customs. Speaking Spanish is not required, as all meetings are conducted in English.

Do you have SaddleBrooke friends/neighbors who are interested in joining our club? Suggest that they come as a guest to the next meeting. They can get in touch with Susan Durchslag, our membership chair, at [email protected] for details. Calendar year membership is $20 per person.